Economic Development in the Era of CRT and COVID 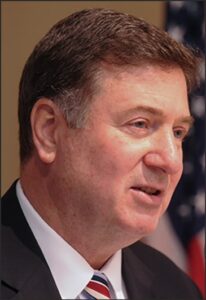 George Allen is no longer engaged in the rough and tumble of partisan politics. But as a Reagan Ranch Presidential Scholar with the Young America’s Foundation, he still gives a fair number of speeches. And when he does, he sounds the Reaganesque themes that he championed as Governor and then U.S. Senator: individual liberty, personal responsibility, and opportunity for all.

Allen is not a fan of social engineering and the welfare state. The best social program ever invented is a job, he says. From that proposition flows another: a top priority of Virginia’s governor should be to foster a business climate that stimulates private investment and job creation. And from that corollary flows another: Virginia needs to restore its economic competitiveness.

But Virginia has been losing its competitive edge, Allen said in an interview with Bacon’s Rebellion, and thanks to policies implemented by the Northam administration, the state is at risk of falling even further behind.

The best word Allen can find to describe Virginia’s approach to the COVID pandemic is “halting.” “And that’s being kind,” he adds. The states that stayed open, like Texas, Florida and Tennessee had always been good for business. Their COVID policies expanded their economic edge.

Allen laments the “timid acquiescence” of Virginians to Northam’s executive orders. “People dutifully and unquestionably submitted.” And even when Northam relaxed the rules on masks and mandates, he says, local “commissars” in Northern Virginia tried to continue them. A former University of Virginia football quarterback, Allen described restrictions on outdoor athletic events as so much nonsense: high school athletes weren’t being stricken with COVID. He notes approvingly how some teams in far Southwest Virginia played their games in Tennessee just so there could be fans in the bleachers.

Allen has received his COVID shots and booster, but he disapproves of government coercing people into getting the vaccine. He tells a story about meeting with a senior executive of Ballad Health, a health system in far Southwest Virginia and northeast Tennessee. The executive said the Biden administration vaccine mandates created big problems for the company. Even before the pandemic Ballad was having a hard time hiring enough nurses. The executive commented favorably upon a Tennessee law prohibiting vax mandates. Virginia, by contrast, just went along with the Biden administration, which made it more difficult to persuade staff to get their shots. “Telling people what to do doesn’t help in this part of the country,” Allen observes.

But there’s more to Virginia’s eroding competitiveness than COVID masks and mandates, which, hopefully, are behind us. Allen doesn’t put much stock in the CNBC best-state-for-business list that ranked Virginia No. 1 last year. He pays attention to Chief Executive magazine, which bases its rankings on the criteria mentioned by the people who make the decisions where to invest corporate capital. And what do they care about? Taxes are at the top of the list, followed by regulatory climate, and availability of talent. Virginia ranked 13th in the 2021 survey — “OK” in Allen’s book, but not great.

Allen also assigns credibility to the the Rich States, Poor States 2021 report, which ranked Virginia 3rd nationally for year-ahead economic outlook as recently as n 2012 but pegged the Old Dominion in the 24th spot last year.

All three surveys, I might add, have over-estimated Virginia’s actual economic performance. Virginia’s cumulative GDP growth from 2010 to 2020 ranked 34th nationally. Cumulative domestic migration ranked 37th, as Virginia flipped from being a net importer of human capital to a net exporter.

Allen thinks Virginia has a good chance of improving its economic performance under Governor Glenn Youngkin. His agenda on tax, energy, regulatory, education and workforce policies are “right on target.”

“He may not know the minutiae of state government, but he understands economic and competitiveness…. He recognizes that the states we compete with — Tennessee, North Carolina, South Carolina, Georgia and Florida –are working to lower the cost of doing business.” And he endeavors to do the same for Virginia, as evidenced by his effort to raise the standard deduction on personal income taxes and reverse the Regional Greenhouse Gas Initiative. Allen concedes, however, that a Democratic-controlled state senate won’t make Youngkin’s job easy.

Indeed, Virginia has yet to see the full impact of actions taken during Northam’s governorship when Democrats ran the state. Virginia’s K-12 public schools have yet to recover from the damage wrought by the closing of schools for in-person learning during the height of the COVID pandemic. The Northam administration’s “dumbing down” of educational standards hasn’t helped. Collective bargaining for local-government and school employees could put fiscal pressure on localities and “eat away” at Virginia’s Right to Work law, which Allen regards as essential to maintaining Virginia’s competitiveness.

Most of Allen’s views would be familiar to anyone who has followed his career. But one subject came as a surprise to me — Allen’s subdued reaction to the emphasis on Diversity, Equity & Inclusion (DEI) at all levels of state and local government. He believes fervently in extending opportunity to all elements of society, and he supports recruiting under-represented minorities into the rigorous STEM disciplines. He touts the idea of attaching green cards to STEM diplomas earned by foreign students — whatever it takes to build human capital and make Virginia and the U.S. more economically competitive.

I asked: “Won’t the infiltration of Critical Race Theory into DEI as practiced by Virginia schools, colleges, government and businesses be harmful to investment and job creation?”

Allen finds the tenets of CRT, which advocates reverse racism to compensate for past racism, to be objectionable on philosophical grounds. Drawing from his sports background — his father coached the Washington Redskins — Allen advocates creating a “level playing field” where everyone can compete and succeed based upon their hard work and ingenuity. Government should not pick winners and losers.

But it’s hard to say what impact it will have, Allen says. Having embraced ESG (an acronym for environmental, social and corporate governance), many companies have adopted sustainability- and social justice-related goals. Some may find the new “wokeness” in Virginia institutions to be attractive. Indeed, that was essentially the reason why CNBC, which incorporated social justice criteria into its best-states-for-business ranking for the first time, elevated Virginia to the top spot last year.

If the spread of CRT harms the quality of kids’ education, then it could offset any advantage gained by appealing to ESG-conscious corporations. But it’s too early to gauge the impact, Allen says. “We haven’t seen any measurement.”

Update: This post have been amended to clarify or elaborate upon several points that Allen was making.

This entry was posted in Economic development, Uncategorized and tagged James A. Bacon. Bookmark the permalink.