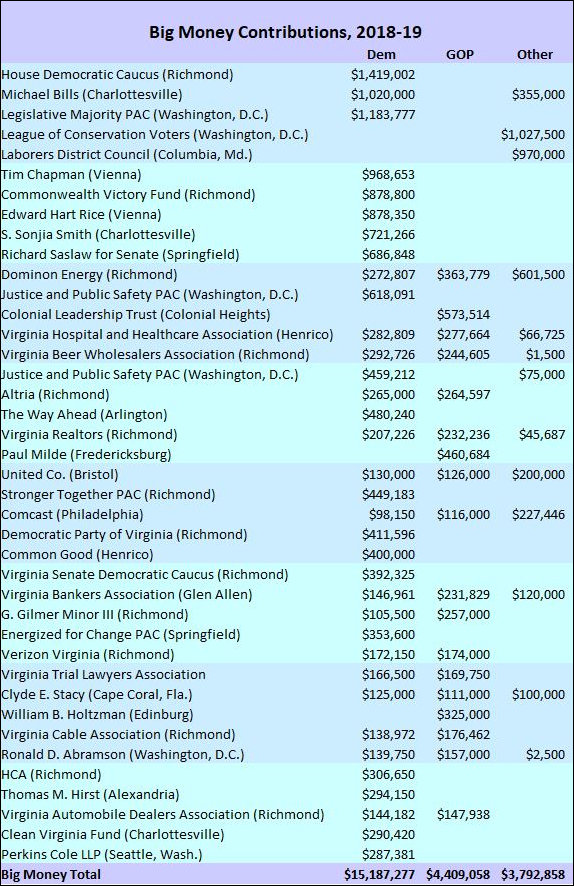 It happened so slowly, I hardly noticed. The Democratic Party has morphed into the party of Big Money in Virginia. The Republican Party has become the party of the little guy.

That much is evident from examining the Virginia Public Access Project’s “Top Donors” list for the 2018-2019 reporting period. To spare you the laborious task of clicking on this link to view the VPAP data directly, I have replicated the list above.

By this reckoning, there are two major parties in Virginia: the Democratic Party and the Special Interest Party, that unorganized gaggle of corporations and business associations in Richmond that split their contributions between Dems and the GOP. Republicans have received negligible Big Money assistance this year.

I’ve been blogging a lot about dark money recently. An enormous amount of unreported moolah is spent prepping the political battlefield by influencing public opinion and public policy. This activity, I have argued, likely entails larger sums and has a bigger impact on shaping political outcomes than money spent directly on political contributions. But let us not overlook the obvious story — largely ignored by Virginia’s mainstream media — that Democrats now totally dominate Big Money campaign contributions, too.

Is 2018-19 an aberration or an indicator in a long-term shift in money dominance? I’m open to different views, but here’s my interpretation now: Donald Trump’s takeover of the Republican Party is driving a significant political realignment not only nationally but here in Virginia. However, the Trumpification of the GOP is a response to even deeper shifts beneath the surface. The Democratic Party of Virginia has largely become the party of wealthy, educated white elites and their allies among “people of color” who buy into the Democrats’ brand of identity politics. The Republican Party is becoming the party of mainly the white middle- and working classes supported by allies in minority groups who identify as culturally conservative — those who feel dispossessed by the dominant culture. Those sweeping generalizations have numerous individual exceptions, of course, but they capture the essence of things.

Money in politics is important in itself, but it reflects deeper changes in society. Liberals, progressives and Democrats are increasingly dominant not only in Virginia politics but Virginia culture. No serious person questions that the Left runs our colleges and universities, especially the elite institutions. No serious person questions that the Left now controls Virginia’s newspapers and media. The Left is increasing its command over museums and other cultural institutions through which Virginians interpret the past. And, though I have only anecdotal information to back me up, I contend that the Left increasingly dominates the world of foundations and nonprofits — including most notably the scads of organizations that dedicate themselves to influencing public opinion and policy.

The takeover of the General Assembly by Democrats this fall is, in my opinion, a foregone conclusion. I don’t need polls — I just see the shift in deep structures. If Republicans hang onto precarious majorities in the state Senate and House of Delegates thanks to low, off-year turnouts, they will surely relinquish control in the next round of elections. But, then, the Left already controls so many institutions in Virginia, and is in such command of the dominant political narratives of our time, that the loss of General Assembly majorities will amount to little more than an afterthought.

This entry was posted in Money in politics. Bookmark the permalink.