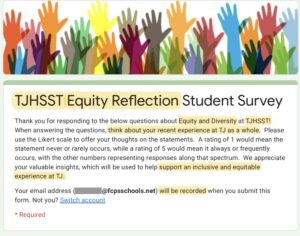 ‘I don’t need indoctrination, I need a good solid education in math, science, non-revisionist social studies, & English. Is that too much to ask?’

FAIRFAX COUNTY, Va. – On Oct. 19, as students at Thomas Jefferson High School for Science and Technology opened their laptops to check in for another difficult week of online learning, Principal Ann Bonitatibus had another priority waiting for them: a questionnaire, entitled, “TJHSST Equity Reflection Student Survey.”

The 12-question survey, uploaded here and publicly disclosed in this column for the first time, asked students to “think about your recent experience at TJ as a whole” and provide answers to “help support” an “inclusive and equitable experience at TJ.” The survey asked if teacher “expectations” for students from “diverse groups,” defined in a parenthetical phrase by “(race, ethnicity, gender, socioeconomic status),” are “equitable” at the school, “both for achievement and behavior.” While optional—a sign of a statistically unsound survey—many students felt obliged to take the survey, and, worse, school officials stated it wouldn’t be anonymous.

The survey is a symbol of a nefarious campaign by educrats nationwide to influence America’s children with the propaganda of critical race theory, the controversial ideology banned from federal facilities for its bigoted and divisive teachings of a new culture of “anti-racism” that shames whites, calls Asians “white adjacent,” tolerates Hispanics, and demands “equal outcomes” for blacks.

A Chinese American parent said the survey reminded her of “the cultural revolution in China” and its interference in every aspect of citizen’s lives. Another parent responded, “This is a parasite revolution.” Since schools shut down earlier this year, Fairfax students haven’t even seen the inside of a classroom, and atop inferior online instruction the school is peppering children with questions about “equity” and “equitable” experiences?

Born in India, TJ mother Suparna Dutta said, “It does not take a village to teach my child about ethical and moral values. That is my sacred job and responsibility as a parent, and I find it offensive that Fairfax County Public Schools tries to intrude in my family values whenever it wants,” even, she noted, with a “surreptitious survey.”

“Children are innocent and pliable,” said Dutta. “By including words such as ‘inclusive’, ‘nonbiased,’ ‘diverse,’ school officials are seeking to plant seeds of identity politics in young minds. I don’t need indoctrination, I need a good solid education in math, science, non-revisionist social studies, & English. Is that too much to ask?”

Since 2015, when former President Obama signed new legislation called the Every Student Succeeds Act, school administrators have conducted “student climate surveys” as an “accountability” measure for schools. Since the killing of a black man, George Floyd, by a white police officer on May 25 earlier this year, education activists have employed “student climate surveys” as yet another Trojan Horse for their race agenda.

The school’s principal-appointed “equity team,” including administrators and teachers, wrote the survey. The second question on whether teachers “acknowledge a wide range of contributions and achievements” underscores the thesis of critical race theory that the “contributions” of black students are excluded from the “range” because of “white supremacy.”

Also, zeroing in on whether teachers “provide opportunities” for students from “diverse identities and backgrounds” underscores the grievance (again) that “systemic racism” shuts black students out of “inter-group communication” and “problem solving.” Every question is a leading one in which the answers reinforce the critical race theory allegation of “white supremacy” in schools.

From San Diego to New York City, school administrators, school boards, and education officials are using “anti-racism” as an excuse to ditch traditional measurements for grades and “merit,” like tests, attendance, and participation, claiming these benchmarks of “behavior” are symbols of white supremacy “systemic racism,” responsible for an achievement gap between the academic results of black and Hispanic students and that of Asian and white students. They don’t look at the one thing that is responsible: the failures of public educational systems.

Last week, San Diego Unified School District voted to ditch annual grades for an amorphous “mastery of the material” standard, also eliminating lost points for turning in assignments late or acting out in the classroom. The school district vice president, Richard Barrera, said the changes were necessary to create “an anti-racist school district.”

Also in California, the San Francisco Unified School District is voting on whether to replace the merit admissions process for the premier Lowell High School, a STEM school, with a lottery. In New York City, parents are facing a campaign to remove the academic test required for entrance to the city’s selective science and math (STEM) schools, including Stuyvesant High School and the Bronx High School of Science, with a school official acknowledging a change would be “political.”

Earlier this month, in Massachusetts, Boston Public Schools presented a “racial equity planning tool” to eliminate the academic exam to its three top schools, including the O’Bryant School of Mathematics and Science, because the school’s racial demographics “don’t mirror” the district’s demographics. It noted “Asian and white students” are “meeting or exceeding expectations at higher rates,” but black and Hispanic students are not, based on state exams and district report cards.

This summer, leaders at the Illinois Math and Science Academy, the state’s No. 1 STEM school, circulated a PowerPoint that reprinted the claim, “Math was never neutral.” They cited critical race theory and the “implicit bias in STEM,” to allege that “white male identity” dominates “what it means to be a scientist,” that “feminine and ethnic identities are not valued” and that mathematics should be called “mathematx,” to “signify a humanizing re-imagination of mathematics free from dominance of Eurocentric and White culture.”

Activists Bring Critical Race Theory to a School Near You

In Fairfax County, Va., a small but vocal group of radical TJ alumni activists espousing ideas of “social justice” and “anti-racism” have been working with the 12 Democratic members of the Fairfax County, Va., school board, the state’s Democratic education secretary, state Democratic politicians, and TJ’s principal in an organized campaign to not only undermine the school’s selective admissions process but also the school itself.

In an Oct. 6 school board “work session,” the school board voted 12-0 to eliminate the TJ admissions test in 12 minutes and 11 seconds of dizzying parliamentary maneuvers by the school board chair, Ricardy Anderson. More than once, board members said they were “confused.” But in less time than it takes most people to run a mile, the school board killed the STEM in the STEM school and destroyed its ability to remain one of the nation’s best.

On Sunday, about 100 parents, students, and community members held a “memorial service” to mourn the death of the school, protesting its hijacking by educrats. The next day, students got the “Equity Reflection” survey, filled with the buzzwords of critical race theory. The survey also asked whether:

Race Means Nothing If We Can’t Weaponize It

Since June, students and alumni have been subjected to a torrent of caricatures from public officials and radical alumni that “stereotype” and “stigmatize” the school’s mostly Asian and mostly immigrant families as not reflective of the “talent” or “diversity” in the county, not to mention “toxic,” “test prepped,” and “racist,” engaging in “pay-to-play” schemes to gain TJ admission for their children.

In June, the principal sent the school’s mostly minority parents an email, pleading with them to check their “privileges.” In September, state Secretary of Education Atif Qarni compared students doing test prep to taking illegal “performance enhancement drugs” to “get a leg up.” A Virginia Democrat blog shares a 2018 video in which a retired teacher calls parents from India “ravenous” and derisively notes they immigrate to the United States “however they come here.”

The survey reflects this view of racial harmony. It also asked students to rate whether:

As part of the district’s campaign to end its merit-based, race-blind admissions to this selective public school, Fairfax County Superintendent Brabrand has regularly violated this “inclusive, nonbiased language” standard, saying that “students of color” don’t feel welcome at TJ, even though 73 percent of the students are Asian American and “students of color.” Fed up, parents launched a Change.org petition to remove Brabrand and TJ Principal Bonitatibus from office, saying they had “betrayed” students and families.

“Where is any concern for our children?” asked a TJ parent. “These kids are suffering from isolation, no interaction with peers, anxiety, stress, fear that they will never step into a classroom this year, and the school is only concerned about collecting data for some ideological, politically-motivated agenda.”

In reporting about this ongoing controversy, students and I were subjected to more public caricatures. The education reporter at the Washington Post, Hannah Natanson, published a gushing portrait of a single black student at TJ alleging the school’s mostly Asian students are “racist.”

Natanson wrote that the mostly Asian parents at rallies opposing the admissions changes were “screaming” and two parents, including me, “attacked” the black student in an article in which we did nothing of the kind. In a correction, the newspaper claimed (wrongly) that we had “disparaged” the student. In a conversation, Natanson’s editor, Kathryn Tolbert, told us, “You diminished her experience.”

In the cult of critical race theory, nonscientific surveys and “experiences” are substitutes for data.

This all reveals that, despite the wild claims of critical race theory ideologues about supporting “inclusive” and “diverse” values, what they really want is groupthink and compliance, the hallmarks of a cult.

Asra Q. Nomani, a former Wall Street Journal reporter, is the mother of a Thomas Jefferson High School student. This article was published originally by The Federalist.

This entry was posted in Culture wars, Education (K-12) and tagged Guest contributors. Bookmark the permalink.