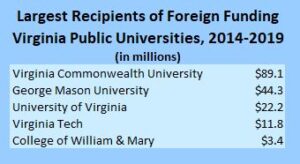 Virginia’s five research universities received $170 million in foreign funding between 2014 and 2019, according to federal Department of Education disclosure data. Virginia Commonwealth University accounted for almost half the total sum, thanks mainly to contracts with the Qatar Foundation. VCU’s School of the Arts has operated a campus in Qatar’s Education City since 1998.

The Trump administration has raised the issue of foreign gifts and contracts with American higher-ed institutions, suggesting that foreign states with interests antithetical to those of the United States — China, Russia, Saudi Arabia (which has underwritten the spread of fundamentalist Islam) and Qatar (a potential proxy for Iran) in particular — have exercised influence in the U.S. through their ties to U.S. colleges and universities. Congress requires higher-ed institutions to report foreign gifts and contracts valued at more than $250,000.

None of the five Virginia universities reporting foreign gifts and contracts were among the 12 for which DOE has opened compliance investigations for failure to properly disclose the gifts.

A report issued this month, “Institutional Compliance with Section 117 of the Higher Education Act of 1965,” provides this background:

Higher education industry players have solicited foreign sources — including foreign governments, corporations, and persons — through official fundraising operations, quasi-entrepreneurial activities by professors and administrators, and through captive or affiliated foundations and alumni organizations. For at least two decades, the industry has been on direct notice that at least some of these foreign sources are hostile to the United States and are targeting their investments (i.e. “gifts” and “contracts”) to project soft power, steal sensitive and proprietary research, and spread propaganda. Yet, the Department is very concerned by evidence suggesting the higher education industry’s solicitation of foreign sources has not been appropriately or effectively balanced or checked by the institutional controls needed to meaningfully measure the risk and manage the threat posed by a given relationship, donor, or foreign venture. …

There is very real reason for concern that foreign money buys influence or control over teaching and research. Disclosure and transparency might mitigate the harm to some extent. However, the evidence shows the industry has at once massively underreported while also anonymizing much of the money it did disclose, all to hide foreign sources (and correspondingly, their influence on campus) from the Department and the public.

The report was particularly concerned about donations from China, Saudi Arabia, Qatar, and Russia. Qatar, a small country on the Persian Gulf, enjoys close diplomatic relations with Iran. The report describes Qatar as “a known ally of Iran.”

Of the five Virginia universities reporting data of foreign gifts and contracts, VCU has the biggest exposure — $89.1 million between 2014 and 2019. The bulk of that sum came in the form of two contracts totaling $78 million with the Qatar Foundation.

The primarily concerns of the DOE report is the way hostile powers use their university ties to extract technology and peddle foreign influence. But there is little in the DOE database to suggest that any illicit tech transfer from Virginia institutions to hostile powers might be taking place.

The  database provides only sparse details on each gift/contract. Presumably, the contracts with the Qatar Foundation are tied to VCU’s school of the arts in Qatar. VCU has never made a secret of its ties to the Middle Eastern nation. To the contrary, the university cites its Qatar connection as an example of its racial/ethnic diversity.

Here is a breakdown.

William & Mary. Among reporting Virginia institutions, The College of William & Mary reported the least foreign involvement, only $3.4 million in gifts and contracts. The largest foreign donor to W&M has been the Royal Embassy of Saudi Arabia. The DOE database points to four gifts totaling more than $2 million between 2016 and 2019. W&M press releases make mention during this time of Saudi law students enrolling in the law school to “deepen their understanding of the American legal system to apply that in their businesses and legal practice back home.”

Virginia Tech. Reporting $11.8 million in total foreign gifts and contracts, Virginia Tech had little involvement with China, Russia, Saudi Arabia or Qatar. However, the DOE report does specifically cite an incident at Virginia Tech with a China connection.

In 2017, a Virginia Tech professor of biological systems engineering — a Chinese national — was indicted for conspiracy to commit or defraud the United States. He and two associates provided false statements and certifications to the National Science Foundation (NSF). He submitted a proposal to NSF to receive federal funding for work that had already been completed in China, and it appeared that he “also sought to benefit China” through the project. One condition of the grants was that he give 30% of the money to Virginia Tech, which he did not do. The report provides no details on how China might have benefited from the fraudulent application for NSF funds.

Also, the database indicates that in 2014 Tech received a $330,000 contract from Huawei Technologies, the Chinese telecommunications company accused  of stealing technology, evading sanctions against Iran, and threatening to dominate 5G technology. There is no indication in the database of what the contract entailed, nor any indication that inappropriate technology transfers took place.

George Mason University. GMU has reported $44.3 million in foreign gifts and contracts. The biggest benefactor by far has been the Royal Embassy of Saudi Arabia, which engaged in nearly $40 million in contracts between  2014 and 2017. The United Arab Emirates and Kuwait made smaller gifts. All other nations combined accounted for about $2 million only. GMU, which has a large Saudi student population, has been the third-largest recipient of Saudi funds of any higher-ed institution in the country. Many online commentators have found something sinister in the connection, but have offered few specifics of how the Saudis might be exercising undue influence. A GMU spokesman told Inside Higher Education that the funds are for a “contractual arrangement” with the Saudi Arabian Cultural Mission to collect tuition and fees for students who receive Saudi government scholarship.

Virginia Commonwealth University. VCU has reported the largest number of gifts/contracts of any Virginia institution. Every one of them is classified as a “contract,” not a gift. Outside of the Qatar connection, most contracts have come from friendly nations such as Canada, England, the Netherlands and Switzerland. Two small contracts originated from China under the auspices of Novo Nordisc Pharmaceutical.

Bacon’s bottom line: Unless it turns out that Virginia universities are failing to report foreign gifts and contracts — and DOE never suggests that might be the case — citizens of the commonwealth can rest easy. Virginia institutions are doing little business with questionable foreign powers — none with Russia, none with Iran, and very little with China. VCU, GMU and W&M do have connections with Saudi Arabia and Qatar, but the ties are educational, neither tied to R&D nor, as far as we know, propagandizing in the U.S.

The story here is that there really is no story here.