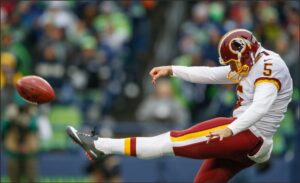 For almost a century the local pro football team has been the Washington Redskins. When the Redskins name became politically incorrect, the team temporarily became “The Washington Football Team” (WFT). Two years later, the WFT is “The Commanders.”

Few Washingtonians like the new name. Competing cities think it looks good – on us.

Public naming presents politicians with an opportunity to signal their virtue. Private political entrepreneurs guilt-trip donors into donating more to the entrepreneurial cause. (Think of how the co-founder of Black Lives Matter parlayed her cred with the woke crowd into a portfolio of upscale homes.) Office holders, perhaps bored by housing, roads, health care, education, and law enforcement, welcome the distraction.

The supposed beneficiaries of renaming, such as Native Americans, do not appear front-and-center in the general scrum of money and ego.

But how to account for “Commanders”? Is it an unconscious slip, revealing disdain for the “provinces” — those who are “commanded”? Or did the team namers seek to be edgy and hip? Maybe they were inspired by others, such as Cleveland’s baseball franchise, which, after decades as fierce, noble warriors, the Indians, is now “The Guardians,” in honor of some socialist-realist statues near the Cleveland stadium. They are famous (in Cleveland) as “the guardians of traffic.” No kidding.

The first successor name, the WFT, was unlike any in pro football. No nasty little animals – Bobcats, Wildcats, Polecats, Meerkats, Hepcats – for us. The WFT rode into town a mysterious Team With No Name. (Clint Eastwood, The Man With No Name himself, should play team owner Dan Snyder in the movie of this story.) Now, the namers gave us the Commanders. (Affectionately, the “Commies”?)

One path to a decent name is to embrace our heritage — carefully. Any heritage is a mixed bag. Think Dallas Cowboys, Miami Marlins, Miami Dolphins, Colorado Rockies, Baltimore Ravens, and many others. They are like travel posters inviting you to visit and spend money. But hear “Arizona Diamondbacks” and you wonder if something deadly lurks in the grass. Hear “Washington Commanders,” and you think of an overbearing government, FBI misbehavior, and mask mandates.

No wonder team spokesmen want to find a military theme in “Commanders.” Indeed, a military vibe could work, if classical and understated. Consider Captains, an ancient generic term for military leaders. Think of the biblical echoes of Rudyard Kipling’s Recessional, “the captains and the kings depart.”

The classical resonance would avoid tedious details such as which Services have commanders (Navy and Coast Guard), and which don’t (Army, USAF and Marines have Lieutenant Colonels.) All have captains. But a Navy or Coast Guard captain well outranks an Army, USAF and USMC captain. Get it? I knew you would.

Commanders/Lieutenant Colonels are at the middle of commissioned ranks. In real life, they deserve our thanks and admiration, but in sports imagery, they are no big deal. Consider the competition. For at least 17 Sundays the team must take on rams and chargers, bengals and lions, raiders and buccaneers, titans and giants. Tough crowd.

OK. To fix this mess the team needs drastic action. Start by punting:

1) Cancel “Commanders.” Confess the error. Promise never, ever to do it again.

2) Quietly let the press know that a do-over will cost owner Dan Snyder mucho dinero. Yet (speaking softly to the reportorial ear), he thinks it’s the right thing to do. For the fans. Get ready for a crescendo of gratitude.

3) Get back some of the owner’s dinero. Put a premium on the now-defunct Commanders merch. Then, market the heck out of it. Washington fans will go nuts out of nostalgia for the team that never was. I can hear the ads now:
A real Commanders ball cap, Fans, is like land…. They’re not making any more of it!

4) Carefully engage fans in re-naming. Recall Yale Coach Herman Hickman in 1950 on how to manage fans: keep them sullen but not mutinous. (Taking a competent wide receiver in the April 28 draft would also help.)

Here are the name options:

a) Pleasant and meaningless, like Wizards. (Grade: C+). Better: “Washington Stars”? (Grade: B+). Above all, nothing venomous. Diamondbacks: (Grade F).
b) Traditional, manly, fierce: “Washington Commandos:” (Grade A.) Or “Troopers”: (Grade A-)

c) Or celebrate the bedrock of a government town, tax collection: “Washington Revenuers.” ( Grade A+).

5) Speaking of revenue, think of the marketing tie-ins! Road Runner (Taxpayer, Moonshiner) and Wile. E. Coyote (Revenuer, an IRS agent) as the mascots. The stadium could contain H&R Block tax-prep booths. Leave your shoebox full of last year’s receipts and cancelled checks before kick-off. Pick up the completed package by the fourth quarter. Alcoholic Beverage Control stores at the stadium could wrap up your favorite liquid consolation – already taxed, for your shopping convenience. That night, enjoy spotting yourself among fans dropping their completed Returns into stadium mailboxes, on telecasts sponsored by your friends and neighbors at the U.S. Treasury.

Hail to the Revenuers, Fans!

This entry was posted in Uncategorized and tagged Guest contributors. Bookmark the permalink.