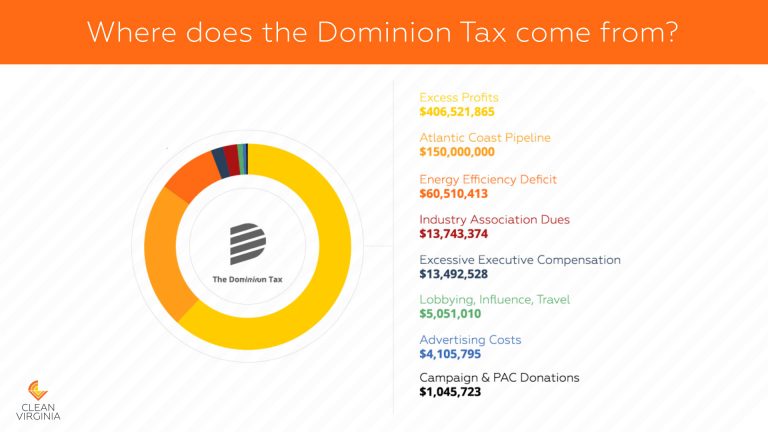 Clean Virginia’s recent report accusing Virginia’s two investor-owned electric utilities of annually “taxing” their customers $254 or $89 respectively has a strong basis in fact, and beautifully packages the information, but ultimately is flawed and unfair.

Which is a shame, because the basic premise is correct.  The utility regulation process in Virginia has been badly subverted, the regulators disabled, enriching utility shareholders at the cost of shareholders.   Reading the entire report tells the story of how every well, and I endorse (and recognize) many of their recommendations.   But be very wary of that “tax” figure.

Read the Washington Post’s account and others uncritically and you will assume that you, average residential customer, could be paying $20 a month less to Dominion Virginia Energy or $7 less to Appalachian Power Company.  Those figures might be used in political conversation (such as by somebody’s opponent in a primary) or regularly cited by Dominion opponents in legislative debate.

Now that I’ve read the report and seen the basis, this regular Dominion critic must point out the problems.  As an old campaign hand, rule number one with going negative is make sure your facts are water tight.  Keep the hyperbole to a minimum because if you lose credibility, you lose the game.

First, that “tax” includes far more than the rate impact of all the favorable legislative diktats which have tied the hands of the State Corporation Commission.  Those are a major element of the sums Clean Virginia is pointing to, but then it layers on these:

Utility accounting is tricky, and not every expense the company makes can be charged back to the customers.   When it can do its job, the SCC often disallows much of those (especially advertising, lobbying and donations) and the stockholders pay for those.  Those cost reviews are a major element of rate cases.

Also, some of those expenses are also related to and supported by profits from other business lines of Dominion Energy’s parent company.  Again, when the SCC does its reviews it can parse those out. (It is a fair point that right now, in response to the utility’s requests, the General Assembly is preventing the SCC from doing its job, but a case is scheduled for 2021.)

The report zeros in on Dominion Energy President Bob Blue’s compensation, an easy way to get a gasp from liberal voters, but normal SCC regulatory oversight would not change that.  I immediately suspected this report was written by somebody who either did not know, or was willing to ignore, regulatory accounting.  Sadly, I was right.

And yes, ratepayers will be covering costs of the Atlantic Coast Pipeline when (if?) it gets built, but to add in an assumed and disputable cost for that in this accounting is just cheating.  And that adds more than $50 to the total “tax” claimed for Dominion customers.

Second, once Clean Virginia identified all the costs it claims (claims) result from the Virginia General Assembly’s meddling with the process, it divides them by all customers.  It ignores customer classes.  The $35 million paid by a shipbuilding company and all the other major industrial users gets averaged in with homeowners.

Again, somebody made a conscious decision to ignore basic facts.  It is easy to find the allocation of Dominion revenue between the major classes (industrial, commercial, residential) and then the average could have been taken off those.  But the numbers wouldn’t have been that high for residential customers, dimming their rhetorical impact.

“However, the cost to these non-residential ratepayers still falls to actual Virginians — they ultimately bear the costs of commercial, public authority, and industrial energy bills, whether as consumers, taxpayers, or as stakeholders Virginia-based businesses. As a result, we use an average among all ratepayers to best and most clearly express costs across all Virginians and their businesses,” is the justification provided by Clean Virginia.

(A quick aside:  don’t you love it when liberals use the word “tax” for its pejorative effect and demonstrate they really DO understand that business taxes and costs ultimately pass to customers?)

I’ve spent more than a decade getting more and more concerned and demonstrative about how the General Assembly has transferred decisions to itself and away from the State Corporation Commission, and then made those decisions very badly indeed.  For the first time in 2019, I will be writing about this with no paying client, no stock in my former client, and total freedom to call ‘em like I see ‘em. My goal is to tell you what is being done to you, and it’s up to you whether you care.

The facts are bad enough and no hyperbole is required.