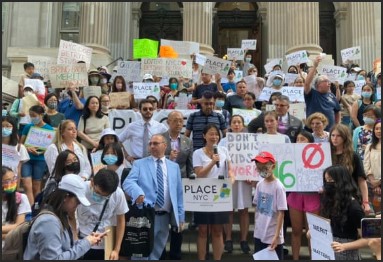 Today, a diverse coalition of seven organizations representing parents and students from the Hindu, Jewish and Chinese communities, as well as others, filed an amicus brief — aptly named a brief by friends — supporting the families of Coalition for TJ as they fight to end the anti-Asian racism in Fairfax County Public Schools’ new admissions process to one of America’s top high schools, Thomas Jefferson High School for Science and Technology, or TJ.

In February, in a lawsuit, Coalition for TJ v. Fairfax County School Board, U.S. federal judge Claude Hilton ruled the new admissions policy is “patently unconstitutional” because it discriminates against Asian students in an obvious effort to increase the number of Black and Hispanic students at the school. The school board removed a race-blind, merit-based exam to the school in December 2020 and replaced it, in a “rushed” process, the judge ruled, with a subjective admissions process.

Fairfax County Public Schools, dubbed #UnFairfax by parents, is filing an appeal in the Fourth Circuit Court of Appeals. Pacific Legal Foundation, representing the Coalition for TJ, has filed its arguments why the ruling is correct. Oral arguments are expected in September. Fourth Circuit judges already indicated they are biased toward the school system, allowing them to continue the unconstitutional admissions process this past spring. If the Coalition for TJ loses the appeal, it will likely appeal the case to the U.S. Supreme Court, which will next fall hear a similar case alleging anti-Asian bias by Harvard University and the University of North Carolina at Chapel Hill.

Why does all of this matter? This case raises questions about whether Asian families can expect equality under the law in America, as school systems pursue “equity” plans that discriminate against Asian students.

The amicus was filed by the Dhillon Law Group, led by attorney Harmeet Dhillon, whose family immigrated to the United States from India. Jewish groups signed onto the amicus brief because they are long familiar with targeted discrimination in education, barred for example from some Ivy League schools decades ago because admissions officers decided there were “too many Jews” on their campuses.

The groups that signed onto the amicus include:

Gary Lawkowski is not only the attorney at the Dhillon Law Group who penned the amicus brief but he is also a Class of 2005 graduate of TJ. He says, “I worked on this brief because I do not believe it is appropriate to discriminate against students based on their race or ethnic background.”

I am a Thomas Jefferson graduate, and I think some of the most important lessons I learned in TJ were not on the curriculum. Rather, they came from being in an environment that, in spite of some of the rhetoric today, is incredibly culturally diverse, where more is expected of you than in your base school, and where you have the opportunity to succeed or fail based on merit. The new admissions criteria move away from merit, which is bad policy, and do it by seeking to limit students opportunities based on race and ethnic background, which is illegal.

In New York City, Chien Kwok, a parent and cofounder of PLACE-NYC, says that the organization wants to make certain that families “defending meritocracy and fighting discrimination” across the country “know that they are not alone.” On June 17, families in New York City, for example, rallied in support of merit in admissions, opposing lottery admissions. Most of the families at the rally were Asian, with the lottery expected to lower the number of Asians admitted to top schools.

One student held up a sign that read, “I have a dream!”

For PLACE NYC, we signed this amicus because we know that defending meritocracy and fighting discrimination is a shared cause across our country. The basis for the formation of PLACE is the notion that parents are not alone in believing in expanding access to rigorous accelerated education through merit-based admissions processes and opposing the minimizing Asian students just because they are the wrong racial minority group. Many families in NYC have found their voices amplified by PLACE’s advocacy work where they may not have the opportunity or want to risk their livelihoods for speaking out. By signing on the amicus brief, we want to, with our amicus partners, support the families of TJ and other schools across the country to let them know that they are not alone.

There are kids with 97, 98 and 99 GPA — valedictorians, who didn’t get their choice schools. They are in same lottery group w/63% of all kids. Remember that >50% of NYC kids can’t do grade level work.

They will destroy all the top high schools in NYC! Except the 8 #SHSAT. https://t.co/PXZ28Z1f4d

The story is by now familiar. In 2020, the Fairfax County School Board decided that nationally acclaimed Thomas Jefferson High School (TJ) accepted ‘too many Asians’ with its meritocratic admissions process. To ‘solve’ this ‘Asian problem,’ the school board proposed a euphemistically named ‘merit lottery,’ but simulations showed that while Asian enrollment would plummet and both Black and Hispanic enrollments would rise, so would White enrollment – not the desired outcome. So the school board implemented instead a geographic quota on top of vaguely defined “holistic” criteria, which then delivered their desired racial outcome; Asian enrollment fell by more than 20%.

This is, clearly, engineering for racial balance, which is unconstitutional. The brave parents of TJ sued in 2021, and we support them with this amicus.

The racial engineering at TJ is hardly unique. Also in 2021, Friends of Lowell Foundation –- a co-signer of this amicus brief — sued the San Francisco Unified School District for replacing meritocratic admissions at Lowell High School, the leading public magnet high school in San Francisco, by a euphemistically named ‘choice’ lottery — again, to ‘fix’ its own ‘too many Asians’ ‘problem.’ Significantly, it was admissions at Lowell that was the subject of Lee Cheng’s pioneering lawsuit in 1994, which resulted in Lowell backing down from its ‘diversity’ and ‘equity’ assault 27 years against meritocratic admissions.

Here in New York, in 2018, CACAGNY sued the City for “solving” its own “too many Asians” “problem” at the fabled Specialized High Schools by expanding vastly the historically limited, supplementary admissions pathway, known as the Discovery Program, at the expense of the main mechanism of the meritocratic admission test, and then jiggering the socio-economic qualifications for this secondary pathway so as to exclude the then-leading sources Asian students.

The San Francisco and CACAGY lawsuits are in litigation.

These mechanisms, quite different from each other but all facially race-neutral, subtle in operation, and attractively packaged, show the considerable wile and determination educrats deploy as they systematically drive Asians out of meritocratic schools. Worse, these educrats are not beneath manipulating the dials in their mechanisms to either expand their effect when political winds are favorable, or pull back, to weather a temporary storm. The latter, called the “Harvard effect” because Harvard suddenly started admitting more Asians as Students for Fair Admissions launched its Asian discrimination lawsuit against Harvard, is also suspected at TJ and New York City’s Specialized High Schools. It is of utmost importance that the courts are wise to such subterfuge.

With parents and community members like this, school board members are not going to be able to continue their subterfuge without accountability.

We are on the job.

Asra Q. Nomani is a former Wall Street Journal reporter and cofounder of Coalition for TJ. She is a senior contributor to the Federalist and a senior fellow in the practice of journalism at Independent Women’s Forum. This column has been republished with permission from Asra Investigates.

This entry was posted in Education (K-12), Race and race relations and tagged Asra Nomani. Bookmark the permalink.