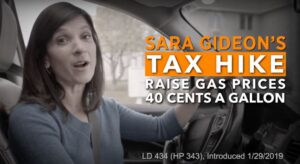 From the Collins-Gideon contest in Maine this year, won by Senator Susan Collins.

One of the most overlooked stories on Election Day was the defeat of pro-carbon tax politicians across the nation and here in New England.

The most notable carbon tax proponent to seek office in New England was Sara Gideon, the speaker of the Maine House who was challenging moderate incumbent Republican U.S. Sen. Susan Collins. As speaker, Gideon in 2019 supported the imposition of a carbon tax that’s end effect on fuel prices bore a striking similarity to the Transportation and Climate Initiative, or TCI, a regional effort to place a price on the carbon in vehicle fuels. The carbon tax proposal went nowhere in Maine and Gideon did not embrace it during her run for U.S. Senate.

Collins, however, continually highlighted Gideon’s previous support for the carbon tax proposal with TV and digital ads describing it as a 40 cent-per-gallon gas tax, which would add an “extra $10 for every fill up.” The ads closed by saying “higher fuel taxes hurt Maine workers, our farmers, and our families.” While most pundits felt Gideon was favored to prevail, Collins beat her 51-42, winning 14 of the 16 counties in Maine.

In Vermont, Republican challenger Mike Morgan defeated House speaker Mitzi Johnson and his uncle, Leland Morgan, won the district’s other seat. The Morgans made carbon taxes, including TCI, the signature issue of their campaign.

In another district, Republican challenger Sally Achey knocked out Robin Chesnut-Tangerman. First elected in 2014, Chestnut-Tangerman had been a strong progressive voice and chaired the House Progressive Caucus. TCI was a central issue in the campaign. A third victory came when Art Peterson, a Republican challenger, knocked out 14-year Democrat incumbent Dave Potter. Tom Bruditt, a Republican incumbent in the same district, won re-election. Peterson and Bruditt both ran ads in their local papers against TCI.

even Perhaps Vermont’s most notable carbon tax candidate to lose was Lt. Governor David Zuckerman. Zuckerman is a long-hair organic farmer, who once worked for Bernie Sanders and supported a carbon tax. He lost to Republican Gov. Phil Scot, who opposes carbon taxes and carbon-pricing schemes like TCI. Carbon taxes proved to be a drag in Vermont’s Democratic primary for lieutenant governor, as Senate President Tim Ashe, the lead proponent for TCI in the legislature, lost. Several of Vermont’s biggest TCI’s supporters were defeated on election night.

One of the biggest political shifts within the TCI boundary came in New Hampshire. Republican Gov. Chris Sununu won his reelection with 65 percent of the vote and the GOP flipped both legislative chambers from Democrat to Republican. New Hampshire Republicans saw an increase of 60 legislative seats. Before the election, Democrats proposed legislation that would undercut Gov. Sununu’s withdrawal from TCI. No other state within the TCI compact had a governor so forcefully reject TCI and no other state saw such significant political changes as New Hampshire. Sununu deserves a lot of credit for seeing the policy as flawed and reading his voters so well on the issue.

The last stop in New England was in Massachusetts. Before the election, Gov. Charlie Baker was seen as the biggest proponent of TCI. Since the election, Baker’s tune has shifted, saying COVID-19 has altered many of the assumptions underlying TCI.  In the Massachusetts Legislature, one of the biggest critics of TCI is Republican state Rep. David DeCoste of Norwell. DeCoste is the primary sponsor of a bi-partisan bill that would force the governor to seek legislative approval before entering the state into TCI. He faced an opponent who self-financed his race, while special interest groups spent thousands of dollars to defeat him. DeCoste won reelection in a deep blue state.

In Pennsylvania, which is one of the few if only states within the proposed TCI region that produces energy, the Democratic minority leader lost to a Republican challenger. Frank Dermody, a Democrat who held office for 30 years, lost to Republican challenger Carrie delRosso by a vote of 49-51. The number one issue in Pennsylvania was energy, and it didn’t help Dermody that House Democrats were seen as against an effort in the legislature to reign in the governor’s authority to enter into a similar TCI carbon tax scheme called the Regional Greenhouse Gas Initiative.

Twelve states, including all of New England, New York, New Jersey, Pennsylvania, Maryland, Delaware, Virginia and the District of Columbia, are considering joining TCI. Last December, when TCI released its first and only memo of understanding, New Hampshire withdrew, leaving just 11 states and DC. The losses of such high-profile carbon tax proponents in Vermont, Maine, and Pennsylvania are sure to give those states even further pause before continuing to consider joining TCI in the midst of a pandemic.

Perhaps some left-wing political insiders were right to question the merits of TCI early on. In Vermont, some of the state’s largest union bosses came out against TCI due to its regressive nature and elitist goals. October saw left-wing environmental groups in New Jersey announce their opposition to TCI, with a director of the Climate Justice Alliance noting that, “TCI is just taxing poor people so we can subsidize rich people’s electric cars.”

While it’s unlikely TCI will have enough defectors in the professional environmental lobby, it certainly lost some credibility among the voters this past November. Polls consistently show the environment is a concern shared by many, but voters can support the environment and be against TCI and carbon taxes, as we saw voters consistently demonstrate this past November. While TCI breathes its last breaths, it’s more obvious than ever that these taxes are bad policy and worse politics.

Paul Diego Craney is the spokesperson and board member of Massachusetts Fiscal Alliance, and an opponent of the Transportation Climate Initiative. This was first published at  CommonWealthMagazine.org  and is reprinted with the author’s permission.

6 responses to “Carbon Tax Advocates Who Lost in November”