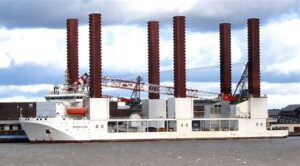 As it looks forward to developing an $7.8 billion wind project off the Virginia coast, Dominion is developing a specialized vessel capable of installing the massive turbines with blades the length of football fields, according to The Virginia Mercury.

The federal Jones Act bars foreign ships from carrying shipments between U.S. ports, which could create regulatory obstacles to hiring European vessels for the task of implanting an estimated 180 wind turbines into the U.S. seabed. Moreover, projected demand for the the world’s small supply of wind turbine installation vessels (WTIVs) is so strong that the day rate for leasing them now exceeds $200,000 a day.

Once upon a time Dominion was in the business of operating coal barges, but never has it ventured into the deep blue sea. WTIVs cost on the order of $250 million to $300 million each. (In August Scorpio Bulkers signed a letter of intent with Daewoo Shipping and Marine Engineering to to build such a vessel for a cost of $265 million to $290 million.)

While many observers balk at the high cost per kilowatt of offshore wind — far exceeding the cost of solar power — the endeavor has won support from the Hampton Roads economic development community, which hopes the Dominion project — including the U.S.’s first WTIV — will give Virginia a first-mover advantage in building a wind-power manufacturing, logistics and maintenance hub for the emerging industry. Think of the project as Virginia’s $4 billion lottery ticket.

The Dominion project is the largest wind farm currently planned for the East Coast of the United States. Norfolk’s central location on East Coast Atlantic, abundant land for industrial sites, and the presence of a large existing shipbuilding and repair sector in the U.S. combine to make Hampton Roads a logical candidate.

Unlike solar farms, which entail minimal maintenance, wind farms require continual upkeep. Eying the potential to create 1,100 direct and industry jobs in Hampton roads and an additional $210 million in annual economic output from the Dominion facility alone, the Northam administration is investing $40 million to upgrade the Portsmouth Marine Terminal to handle the giant turbines and their blades and is committing additional funds to train workers with the technical skills to build and maintain the turbines.

“Given the advantages that the port areas in Hampton Roads offer, in time, it is reasonable to anticipate the new businesses will locate in Hampton Roads to serve a growing offshore wind energy industry,” says the “Hampton Roads Alliance Offshore Wind Report” prepared by Mangum Economics. For every gigawatts of offshore wind that Hampton Roads businesses service, the consulting firm estimates the potential to create 5,200 direct and indirect jobs, mostly in Hampton Roads, $740 million in economic output, $270 million in pay and benefits, and $39 million a year in state and local tax revenues. If Virginia becomes the East Coast hub for offshore wind maintenance, wind farms in Maryland, New Jersey and North Carolina could be a huge economic generators for Virginia.

With all the dollars at stake, one might say there is a mighty political wind behind wind power. Dominion comes out a winner: the more money it invests, the more money it makes. The $8 billion offshore wind project will be the biggest investment in the company’s history. The environmental lobby comes out a winner: The project pushes Virginia closer to their goal of a 100% renewable electric grid by 2050. And the Hampton Roads maritime and shipbuilding industry becomes a huge winner if — a big if — Virginia can capture a large share of the wind-power supply chain.

However, every other state planning offshore wind development has ambitions of snagging industrial development as well, so the field is highly competitive. There are no guarantees.

Moreover, reports like the Mangum Economics paper tell only one side of the story, however. They do not explore what economists refer to as opportunity cost. Using very rough numbers, let’s say that Dominion could build comparable solar generating capacity for half the $8 billion price of offshore wind. In effect, Dominion rate payers will pay an additional $4 billion to buy Hampton Roads a lottery ticket for the giant offshore-wind-supply-chain sweepstakes. If Hampton Roads wins the gambit, the benefits will be huge.

But building an additional $4 billion into the electricity rate base will have tremendous costs. As Steve Haner has detailed in other posts, middle-class families across Dominion’s service territory will pay hundreds of dollars in higher electric bills each year — a sum magnified by the necessity of providing relief for lower-income Virginians and raising rates on everyone else to compensate. Money spent on wind-powered electricity will not be spent on other goods and services, which will have a ripple effect through the economy.

Seen this way, the wind farm is a $4 billion wealth transfer from Hampton Roads from Northern Virginia, Richmond and other parts of the state in the Dominion service territory. As the project seems like a done deal, let’s hope the bet pays off.