How’s this for irony? The only thing saving the City Council of the People’s Republic of Charlottesville from increasing dysfunction in the future is dysfunctional governance today. City Council wants to draft an ordinance that would outline collective bargaining rights for employees, enabling them to negotiate for higher salaries and changes to working conditions — creating new spending pressures, new labor tensions and new areas for conflict. In August Council directed the city manager to research how much money would be needed to support the human resources department in such an endeavor. Trouble is, Charlottesville can’t hire a city manager. The announced interim city manager just resigned. And it turns out that City Hall has no human resources director either. So reports the Daily Progress.

The cultural cleansing shall continue. City Council has approved the sale of Charlottesville’s Robert E. Lee statue to a group that will melt it down and turn it into new artwork. After the city took down the statue of the Confederate hero over the summer, it received six proposals from arts groups, historical societies and individuals” with offers up to $50,000 for the bronze sculpture, reports The Washington Post. City Council chose instead to give the statue to the Jefferson School African American Heritage Center to advance a project to “allow Charlottesville to contend with its racist past.” I’ve only got one question: If the Jefferson School African American Heritage Center is so distraught about the racism embodied in statues and memorials, why is it still named the Jefferson School?

The no-solar solar capital. No part of Virginia outdoes the People’s Republic when it comes to enthusiasm for renewable energy, at least in the abstract. Charlottesville and Albemarle County are home to numerous renewable energy companies — Sun Tribe, Hexagon Energy and Apex Energy among them, not to mention the Clean Virginia pro-renewables advocacy group. Charlottesville/ Albemarle is an ideal location for solar projects in at least one way: proximity to high-capacity electric transmission lines. But the Department of Environmental Quality’s “environmental data mapper” shows only two utility-scale solar projects in Albemarle — and neither are producing. 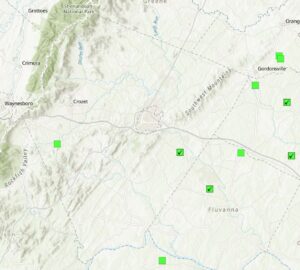 Location of solar projects in and near Albemarle County. (Click on map to see county lines.)

Back when I contacted her in July, Albemarle spokesperson Emily Kilroy confirmed that the county was aware of only three utility-scale solar projects: two approved and one under review. The 136-acre Midway Solar project would have 8-megawatts solar capacity plus 4-megawatt battery storage. The DEQ project database also mentions a 150-acre, 12.5-megawatt Rivanna Solar project.

Oh, did I mention that, according to the DEQ database, neither project is yet  producing electricity?

For purposes of comparison, the Virginia Clean Economy Act (VCEA) calls for 16,100 megawatts of solar or onshore wind in Dominion Energy’s service territory by 2035.

The City of Charlottesville has no space for utility-scale solar, but Albemarle County does. What’s the problem in the People’s Republic? One possibility is that solar, which requires southern-facing sites in Albemarle’s hilly terrain, competes with the winery industry, which also places a premium on southern-facing hillsides. Another possibility: zoning and NIMBYs. Albemarle County’s comprehensive plan is geared to protecting agricultural uses, and landowners don’t like anything that spoils their views. In other words: Solar power for thee, but not for me.

This entry was posted in Culture wars, Government workers and pensions and tagged James A. Bacon, Solar energy. Bookmark the permalink.