A Reasonable Approach to Sea-Level Rise 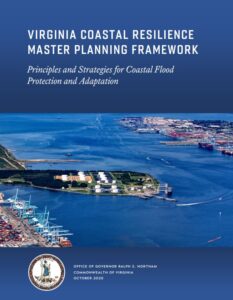 In California, leaders of the environmental/political establishment fervently believe that human-caused climate change is increasing the incidence and severity of heat waves and droughts. But rather than follow through on the logical implications of such convictions, California persisted with forest-management practices and growth-management strategies that turned arid forests into tinderboxes while steering housing development into vulnerable areas. The result has been a series of massively destructive forest conflagrations. Bottom line: California’s environmental and political leaders are idiots.

Here in Virginia, leaders of the environmental/political establishment fervently believe that human-caused climate change is accelerating the rate of sea-level rise and flooding along Virginia’s coast. The difference is that they are following through the logical implications of this belief and giving serious thought to how to make coastal areas more resilient. Thus, while I could nitpick with the breathless conviction that the science is settled, I find the newly issued “Virginia Coastal Resilience Master Planning Framework” issued by the Northam administration to be a reasonable and useful document. 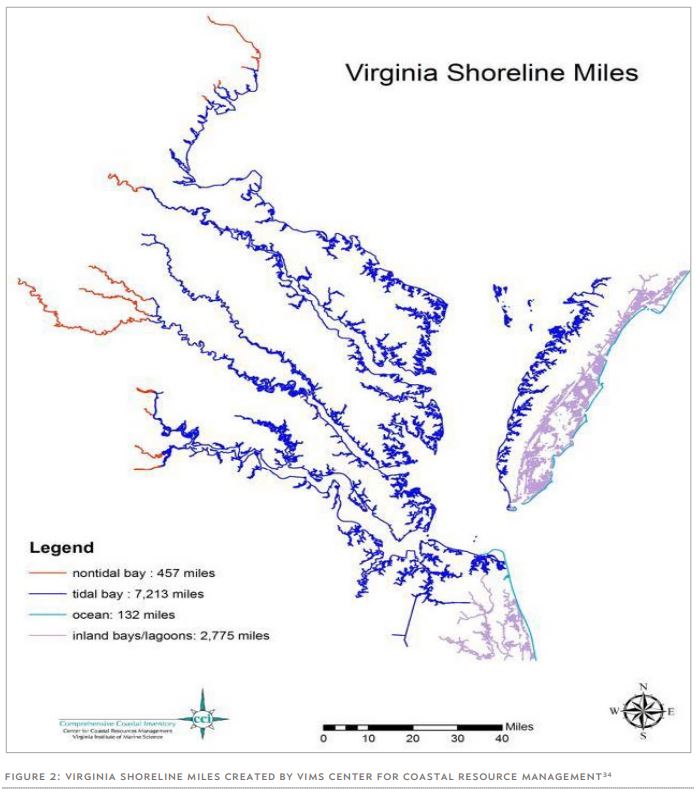 According to the Master Planning Framework, Virginia’s coastal region covers 8,950 square miles and more than 10,000 miles of tidally influenced shoreline. More than 250,000 acres of land, 1,569 miles of roads, and property valued at $17.5 billion lie less than five feet above the high tide line in Virginia.

Furthermore, coastal Virginia has one of the highest rates of relative sea-level rise in the United States. Over and above the effects of rising global temperatures on thermal expansion and ice cap melting, coastal Virginia is experiencing subsidence from shifts in tectonic plates as well as the draw-down of the Potomac Aquifer. The Sewell’s Point tide gauge in Norfolk has experienced more than 18 inches of relative sea level rise in the past 100 years. As a consequence, recurrent flooding in Hampton Roads has increased from 1.7 days of flooding per year in 1960 to 7.3 days per year in 2014.

These are facts, not modeled projections based on hypotheses of the factors driving climate change and sea level rise. Virginia does have a problem. We can debate how rapidly flooding will get worse, but any forward-thinking person should agree that we need to address the issue squarely.

My main issue with the Framework is that it is unnecessarily ideological. The document insists that is critical to “acknowledge climate change and its consequences.” Previous state studies have addressed coastal flooding “without stating unequivocally that climate change is the root of the problem.” The result, says the Framework, has been tortured titles like the Center for Recurrent Flooding Resiliency and the Joint Subcommittee to Recommend Short-Term and Long-Term Strategies Minimizing the Impact of Recurrent Flooding and Coastal Storms.

What’s so bad about tortured titles if, by papering over different views about climate change, they create a strong consensus on the need for action?

Having claimed the mantle of “science,” the authors of the report then utilize projections contained in the NOAA technical report on Global and Regional Sea Level Rise Scenarios for the United States, which forecasts that sea level will continue to rise at an accelerating rate. However, NOAA acknowledges that there a vast range of uncertainty. Here is the chart showing the potential change in feet at Sewell’s Point: 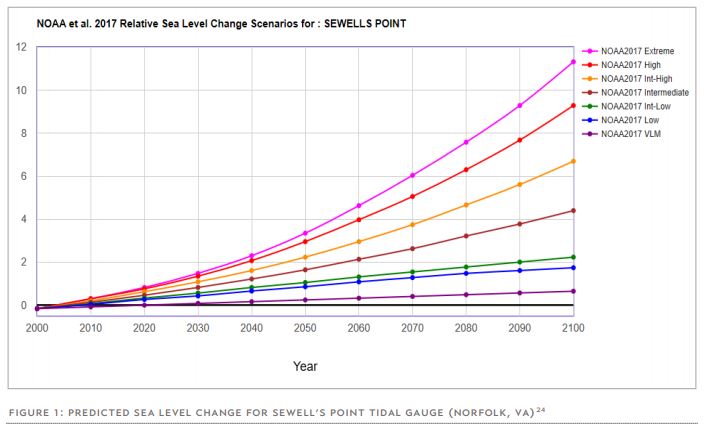 For purposes of planning, the Northam administration has selected the yellow line reflecting the “intermediate-high” scenario. Picking the intermediate-high scenario versus, say, the intermediate-low scenario — more than six feet of rise by 2010 compared to two feet — is a political decision, not a scientific one. I’m sorry, I can’t help it, but the lofty claim by left-of-center folks that their every policy prescription is guided by “science” is grating.

Otherwise, the Framework is a reasonable document. Regardless of how fast the relative sea level is rising, we know that it is rising. We can be reasonably certain the flooding will get worse. And it is prudent to act now rather than wait, California-style, until the disaster is upon us to do something.

As the Framework notes, there are numerous initiatives underway at the local and federal level. But they are piece-meal. The Northam document proposes a comprehensive approach that assesses risks and identifies projects that offer the best cost-benefit ratio to guide the investment of finite resources in the years ahead. That is a reasonable and defensible proposition.

The Framework goes on to make another important point: “Fiscal reality dictates that we will never have adequate resources to armor and/or elevate large sections of our coastline. Further, doing so is undesirable because it would fundamentally alter and degrade the Chesapeake Bay and the ecosystems that support coast Virginia’s economy and define its culture.”

From that flows a major policy orientation: The Coastal Resilience Master Plan will prioritize natural and nature-based features to protect infrastructure. “The Plan will promote structural protective measures only when the science shows that green infrastructure will not offer sufficient protection, and that relocation is not possible.”

I think I’m OK with that. The devil is always in the details. To see the details, we must await publication of the Master Plan itself. For the most part, Northam’s Framework seems a reasonable approach to ensuring that Virginia does not replicate California’s folly.

This entry was posted in Disasters and disaster preparedness, Environment, Resilience, Uncategorized and tagged Climate change, James A. Bacon. Bookmark the permalink.