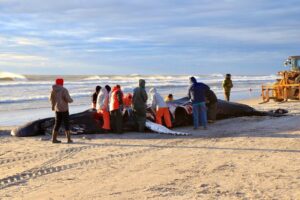 The recent deaths of seven whales off New Jersey, mostly humpbacks, drew national media attention. The National Oceanic and Atmospheric Administration’s Fisheries Directorate is responsible for whales. An outrageous statement by their spokesperson got me to do some research on humpback whale deaths.

The results are appalling. The evidence seems clear that offshore wind development is killing whales by the hundreds.

Here is the statement as reported in the press:

The “unusual mortality” data are astounding. Basically, the humpback death rate roughly tripled starting in 2016 and continued high thereafter. You can see it here.  That data is just for humpback whales, with a dramatic acceleration in particular between 2016 and 2020.

The claim that this huge jump in mortality predates offshore wind preparation activities is wildly false. In fact, it coincides with the large-scale onset of these activities. This strong correlation is strong evidence of causation, especially since no other possible cause has appeared.

To begin with, offshore lease sales really geared up 2015-16, with nine big sales off New Jersey, New York, Delaware and Massachusetts. These sales must have generated a lot of activity, likely including potentially damaging sonar.

In fact, 2016 also saw the beginning of what are called geotechnical and site characterization surveys. These surveys are actually licensed by NOAA Fisheries, under what are called Incidental Harassment Authorizations or IHA’s.

There is some seriously misleading jargon here. IHA’s are “incidental” to some other activity, in this case offshore wind development. They are not incidental to the whales. The term “harassment” specifically includes injuring the whales. That is called “level A harassment.”

To date NOAA has issued an astounding 46 one-year IHA’s for offshore wind sites. Site characterization typically includes the protracted use of what I call “machine gun sonar.” This shipboard device emits an incredibly loud noise several times a second, often for hours at a time, as the ship slowly maps the sea floor.

Mapping often takes many days to complete. A blaster can log hundreds of miles surveying a 10-by-10-mile site. Each IHA is typically for an entire year.

Here is a list of the IHA’s issued to date and those applied for.

There are lots of ways this sonar blasting might cause whales to die. Simply fleeing the incredible noise could cause ship strikes or fish gear entanglements, the two leading causes of whale deaths. Or the whales could be deafened, increasing their chances of being struck by a ship later on. Direct bleeding injury, like getting their ears damaged, is another known risk, possibly leading to death from infection. There can be a big time lag between blasting and death.

Note also that these deaths need not be in the immediate vicinity of the sonar blasting, so spatial correlation is unlikely. Humpbacks in particular are prodigious travelers. One group was tracked traveling 3,000 miles in just 28 days, over 100 miles a day on average. Another group routinely migrates 5,000 miles. Both are winter-summer migrations which can happen twice a year.

Thus, a sonar blasting, site characterization in one place could easily lead to multiple whale deaths hundreds of miles away. If one of these blasters suddenly goes off near a group of whales they might go off in different directions, then slowly die.

The point is that the huge 2016 jump in annual humpback mortality coincides with the huge jump in NOAA Incidental Harassment Authorizations. It is that simple and surely NOAA Fisheries knows this.

Nor is this just about humpbacks. Some of the dead whales off New Jersey are endangered sperm whales. And, of course, there are the severely endangered North Atlantic Right Whales, on the verge of extinction.

Even worse, the IHA’s are about to make a much bigger jump. There are eleven pending IHA applications and eight of these are for actually constructing 8 different monster wind “farms”.

Driving the hundreds of enormous monopiles that hold up the turbine towers and blades will be far louder than the sonic blasters approved to date, especially with eight sites going at once. These construction sites range from Virginia to Massachusetts, with a concentration off New Jersey and New York.  For more on this likely noise storm see.

Clearly, we need a moratorium on new Incidental Harassment Authorizations until the safety of the whales and other marine species can be assured. Hundreds of whales may have already been killed by offshore wind activities. The evidence is right there.

This entry was posted in Energy, Environment, Regulation and tagged CVOW, Guest contributors. Bookmark the permalink.