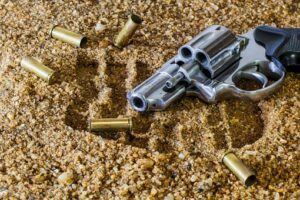 The story of the six-year-old school shooter in Newport News generates endless attention. It seems indicative of so much that is wrong with our society today.

Law-enforcement authorities are rightly focused on the question of how a six-year-old child (a) managed to lay hands on a gun that his parents claimed to have stored out of his reach; and (b) how he managed to bring the gun into school and evade a search of his knapsack. Guns and young children don’t mix any better than guns and alcohol. Though the remedy is less than obvious, it should be clear to all that America has a gun problem.

America also has a violent-child problem, and the solution to that is even more opaque.

The violent-child problem is national in scope, as The Wall Street Journal makes clear in a front-page article today. “Violence among children has soared across the country since 2020, a stark reversal in a decades-long decline in juvenile crime,” the newspaper writes.

In the U.S., homicides committed by juveniles acting alone rose 30% in 2020 from a year earlier, while those committed by multiple juveniles increased 66%. The number of killings committed by children under 14 was the highest in two decades, according to the most recent federal data.

In Washington, D.C., 214 children were arrested for firearm-related crimes in 2022. Sixteen juveniles were shot to death last year — most by other juveniles.

The authorities quoted by The Wall Street Journal attribute the spike to a toxic mix of easy access to guns, disputes arising from social media, and a general breakdown in social order commencing with the COVID pandemic. School closures kept children at home, often without adequate supervision. Losing what little structure they had in their lives, many immersed themselves in toxic social media. When in-school classes resumed, many adults found it impossible to restore discipline. Meanwhile, criminal justice reforms meant to reverse the school-to-prison pipeline meant that many violent children suffered no consequences for their criminal behavior.

Darcel D. Clark, a Bronx district attorney, supported a law that ended the automatic prosecution of 16- and 17-year-olds as adults. Now she has second thoughts about the New York “Raise the Age” legislation. As the WSJ summarizes her thinking, “Too many juveniles arrested on gun possession charges are released quickly because such cases are typically sent to family court — and some of the minors are going on to commit more serious crimes or are being murdered themselves.”

Literally as I was writing this column, an email appeared in my inbox citing the Newport News shooting as reason to address the unsafe storage of firearms. The missive from the Brady’s End Family Fire program assert that 4.6 million children live in homes with unlocked or unsupervised guns; 33% of gun-owning parents who thought their child could not access a household firearm had a child who reported that he could; and eight children every day on average are unintentionally injured or killed due to family fire.

As a non-gun-owner, it strikes me as prudent and reasonable to hold adults responsible for the storage of their firearms and their misuse by their children. This week, says Brady’s, a Safe Storage Bill introduced in the state Senate would mandate all firearms be stored and made inaccessible to children under 18. One can debate the practicality of the bill, but at least it aspires to address a real problem.

But there is so much more to gun violence than unsafe storage. Children are acquiring guns on the social media-fueled black market. And once mayhem takes hold in a community, adults and children alike begin arming themselves for self-protection. How do you stop that? What about the youths given a slap on the wrist by the criminal justice system? What about arguments that erupt on social media outside the purview of adults and violence-mitigation teams? How do we inculcate children with impulse control and anger management? How does our society create six-year-olds raging with so much anger that they threaten to kill their teachers… and then follow through?

Social breakdown is so pervasive and has so many facets and causes that the phenomenon is only imperfectly understood. Before we start flailing around with new laws inspired by the conviction that we must “do something,” perhaps we should pause long enough to study and understand holistically what we’re dealing with. And before curtailing the rights of the overwhelmingly law-abiding majority of citizens, perhaps we should try enforcing the laws we’ve already got.

This entry was posted in Crime , corrections and law enforcement, Gun rights and tagged James A. Bacon. Bookmark the permalink.