Who’s Getting the Vaccine in Virginia? 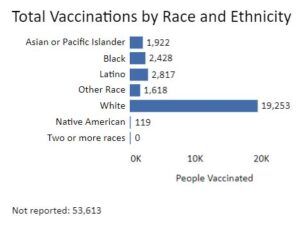 We can also see from the VDH data that the vast majority of people getting the vaccine are white. Blacks are under-represented, accounting for 8.6% of those vaccinated by 20% of the state’s population. Whether that shortfall can be attributed to the percentage of blacks in the healthcare workforce, fear of vaccination in the black population (you know, Tuskeegee and all), or some amorphous structural racism is too early to say.

The other obvious disparity is between men and women. Women are getting vaccinated at twice the rate of men — even though men are slightly more likely to die from the disease.

Looks like a clear-cut case of sexism to me!

No, actually, it doesn’t. The disparity can be explained by the distribution of women in the workforce. According to the Center for Economic and Policy Research, women comprise 64.4% of so-called front-line workers.

— JAB (with a hat top to John Butcher)

53 responses to “Who’s Getting the Vaccine in Virginia?”