What the Wind Project Costs You and Who Pays 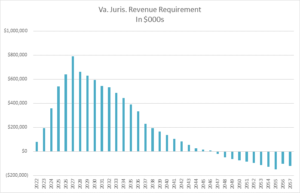 The annual revenue required from Virginia customers to finance Dominion Energy Virginia’s offshore wind installation. It peaks at about $800 million in 2027, driving the amount to be collected on monthly bills. Source: SCC Testimony. Click for larger view.

If the project goes as planned, the consumer cost for Dominion Energy Virginia’s offshore wind installation will rapidly rise to a peak in 2027 and then descend annually over the following 20 years. If it produces power for 30 years, in the final phase the revenue related to the project will exceed the remaining capital costs.

What is this going to cost Dominion’s captive ratepayers?  There is also a related but often ignored question: which of those customers did the Virginia General Assembly exempt from those costs, effectively bumping up the price to those not exempt?

In its promotional materials, Dominion often mentions a figure of under $5 per month as the average cost over the years for that mythical residential customer using exactly 1,000 kilowatt hours per month. That smooths out the coming climb and descent shown in the illustration above, and assumes the projections of net positive years come to pass.

For that residential customer, the 2027 peak is estimated at $14.21 a month, or $170 per year, and then it ramps down gradually. It will be over $100 more per year for long stretch, and plenty of customers use well over 1,000 kwh per month. One electric vehicle will drive that up nicely. For commercial and industrial customers it will be equally significant.

It would be less if everybody paid, but everybody will not.

Another SCC illustration of how the assumed financial benefits of the wind project will offset the capital expenses. SCC staff included costs for future retirement of the plant in the calculation, something Dominion did not in its estimates.

In those same promotional materials, Dominion never mentions that one of its largest wholesale customers, Virginia’s collection of rural electric cooperatives, is fully exempt from paying for this project or its required transmission expansions. And once Virginia fully establishes its Percentage of Income Payment Program (PIPP) to cap electricity costs for low income families, that will exempt another several hundred thousand ratepayers from this particular rider on their monthly bills.

Sean Welsh of the State Corporation Commission’s Division of Utility Accounting and Finance analyzes the customer cost projections in written testimony, recently refiled with several previous redactions lifted. His analysis assumes that Dominion’s predictions of construction cost and timing, and the claimed operational success of the 176 turbines, come true.

Much could go wrong and raise these costs. But for this discussion, we accept their claim that the turbines will be fully operational 97% of the time and will produce about 42% of their nameplate generation capacity over the years (about 1.1 gigawatts against the nameplate capacity of 2.6 gigawatts.)

The all-in cost of the project, including utility profit and financing costs, should be about $21.5 billion over 35 years. Yet only $7.25 billion will be extracted from Virginia customers, which is not the usual pattern of repayment for these kinds of capital projects. Why is so little sought from the customers?

First, the project should qualify for major income tax incentives, a 30% investment tax credit to be claimed on about 83% of the total capital cost. That reduces the revenue required from customers by about $2.7 billion.

Second, this uses a new approach to developing a rate adjustment clause, or RAC, for customer bills. Welsh explains how this new Rider OSW will differ:

A traditional Subsection A6 RAC recovers the costs of the generating facility and transmission interconnection facilities through the RAC, just as with Rider OSW, but the energy and capacity benefits of those facilities are recovered through the fuel factor and base rates, respectively. In order to recover the entire cost of CVOW and the Transmission Facilities, net of benefits, from non-exempt customers, the Rider OSW framework includes adjustments for renewable energy credits (“RECs”), energy sales, and avoided capacity charges that serve to reduce the lifetime revenue requirement.

So customers pay the cost “net of benefits,” and without doubt those are real savings. The prediction is $10 billion in energy sales revenue. Renewable energy credits (RECs) certainly should continue to have value. There will be revenue related to energy sales from the project.

The financial estimates in the calculation are just that, as they are looking out 30 years or longer, but that is why eventually that bar chart above shows the financial benefits exceeding the final capital payments and eliminating the monthly cost to consumers. In about 25 years. If all goes as planned.

As with other RACs, an annual review by the SCC will look at the actual financial results before setting the next year’s customer charge.

The 2020 legislation setting all this up exempted Virginia’s rural electric coops from paying Rider OSW on their wholesale purchases. Of the 11 coops, eight are in Dominion’s territory and depend on Dominion’s transmission facilities, and they are pushing the Commission to be sure they stay totally exempt from those new expenses as well as the turbine’s capital costs.

Nobody knows how many Dominion customer households will qualify for PIPP once it gets underway, perhaps next year. The qualification for PIPP in the law is now simple: any household with income below 150% of the federal poverty level, right now about $43,000 for a three-person family. The customer cost figures being bandied about are not adjusted for their exemption yet.

Any electricity customers in Dominion’s territory who have opted for a third-party supplier will still have to pay the Rider OSW costs on the Dominion power they didn’t buy. But another question mark is Dominion’s half a million North Carolina customers. That state’s utility commission will decide if they pay, with no Virginia General Assembly mandate tying their hands. If they don’t pass it on, we Virginia ratepayer will pick up that share. The assumption in these figures is the North Carolinians also pay.

This “net of benefits” approach on the RAC should reduce the pain for the ratepayers. As a parting thought, note what it implies about previous RACs that collected only costs and assigned the benefits elsewhere. Much of their benefit, as Welsh noted, resulted in lower expenses paid through the utility’s base rates.  That increased the amount of profit buried in those base rates, a little sweetener for the shareholders.