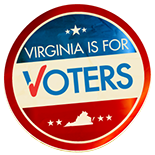 Putting aside the comparison with Georgia, I want to take issue with James Sherlock’s comparison of turnout in earlier Virginia gubernatorial elections with the turnout after significant recent changes in the Commonwealth’s elections laws. First of all, comparing the 66.5% turnout in the 1989 election, in which Doug Wilder became the first Black person in the nation to be elected governor, to any other election is misleading. That was an historic event; of course there would be massive turnout.

More importantly, however, in this type of analysis, one needs to look at the relative levels of registration. Research has shown that increases in registration, especially some variant of automatic registration such as Motor Voter, do not translate into a comparable rise in turnout. In fact, they may result in a decrease in the turnout rate. If registration is relatively low, as it has been historically in Virginia, it is likely those registered are the most committed and the most likely to vote. (See here and here for more discussion of these findings.)

In summary, 25 years ago, the turnout of registered voters in gubernatorial elections was higher than in more recent years, but a smaller percentage of the voting age population was registered to vote. As registration grew, both in absolute terms and as a percentage of the total population, the voter turnout rate decreased to below 50% until the 2021 election when it jumped to 55.3%. It is safe to say that changes in voting laws making it easier to vote accounted for a significant amount of that increase in participation. For example, there were 676,018 more voters in 2021 than in 2017. However, as reported by VPAP, in 2017, there were 195,634 early (absentee) voters, but, almost 1.2 million people voted early in 2021, 861,470 in person.

This entry was posted in Elections, Electoral process and tagged Dick Hall-Sizemore. Bookmark the permalink.