What Dominion is Hiding in its Wind Application 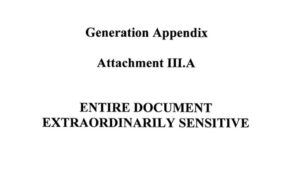 The cover page that declares we the ratepayers cannot see how Dominion Energy Virginia has calculated the levelized cost of energy for its $10 billion offshore wind project. The SCC should break this seal and open this document.

When an applicant at the State Corporation Commission claims certain information is proprietary, or extraordinarily sensitive, a reader not privy to the full document can at least get an idea what is missing.

What is missing from the application Dominion Energy Virginia recently filed at the SCC, a document so dense and complex it was broken into eleven volumes, with 61 separate documents (here)? (That is not counting the tables of contents.) Here are some of the topics masked from view that turned up in a cursory review (in the order they appear in the documents):

Dominion has applied for secrecy for all that information, and perhaps more that wasn’t spotted. In a previous post, Attorney General Mark Herring was encouraged to oppose that request once he officially enters the case. Other participants will have the ability to challenge it, as well, once the SCC sets a case schedule and participants start signing up. The first thing they will have to do is sign a non-disclosure agreement to get access to the sealed information.

The bulk of the case paperwork deals with the transmission routes across the 27 miles of sea to the Virginia Beach shore, and then across parts of that city to plug into the existing electrical grid. There are pages and pages of engineering data and maps, plus the required environmental, historical resource and “environmental justice” impact statements.

Those were not reviewed in detail, but in that case no major deletions or redactions jumped out. It is just hard to impossible to see all the maps, charts and photographs in the poorly-scanned versions of the documents. They may appear again in public notices.

That information will be of great interest to the residents and landowners affected, and it would be wise for the regional media to report in detail on those siting issues. It is a major grid rebuild and upgrade, with the portions on land costing $469 million (plus $1.3 billion for the sea connections). Bacon’s Rebellion is not the place for that, but affected people need to be aware and need to dig deeper than the sales pitch the utility will be making.

For the rest of the utility’s 2.6 million customers, it is the cost and reliability of this massive generation investment which will matter and that will be the focus of future discussions. The financial data behind the levelized cost of energy determination is vital and must be released in full.  Likewise all the operational costs and the various assumptions used in the company’s own projections on the annual revenue requirement, which runs through 2057.