What Dominion Has Learned From Its Experimental Wind Turbines 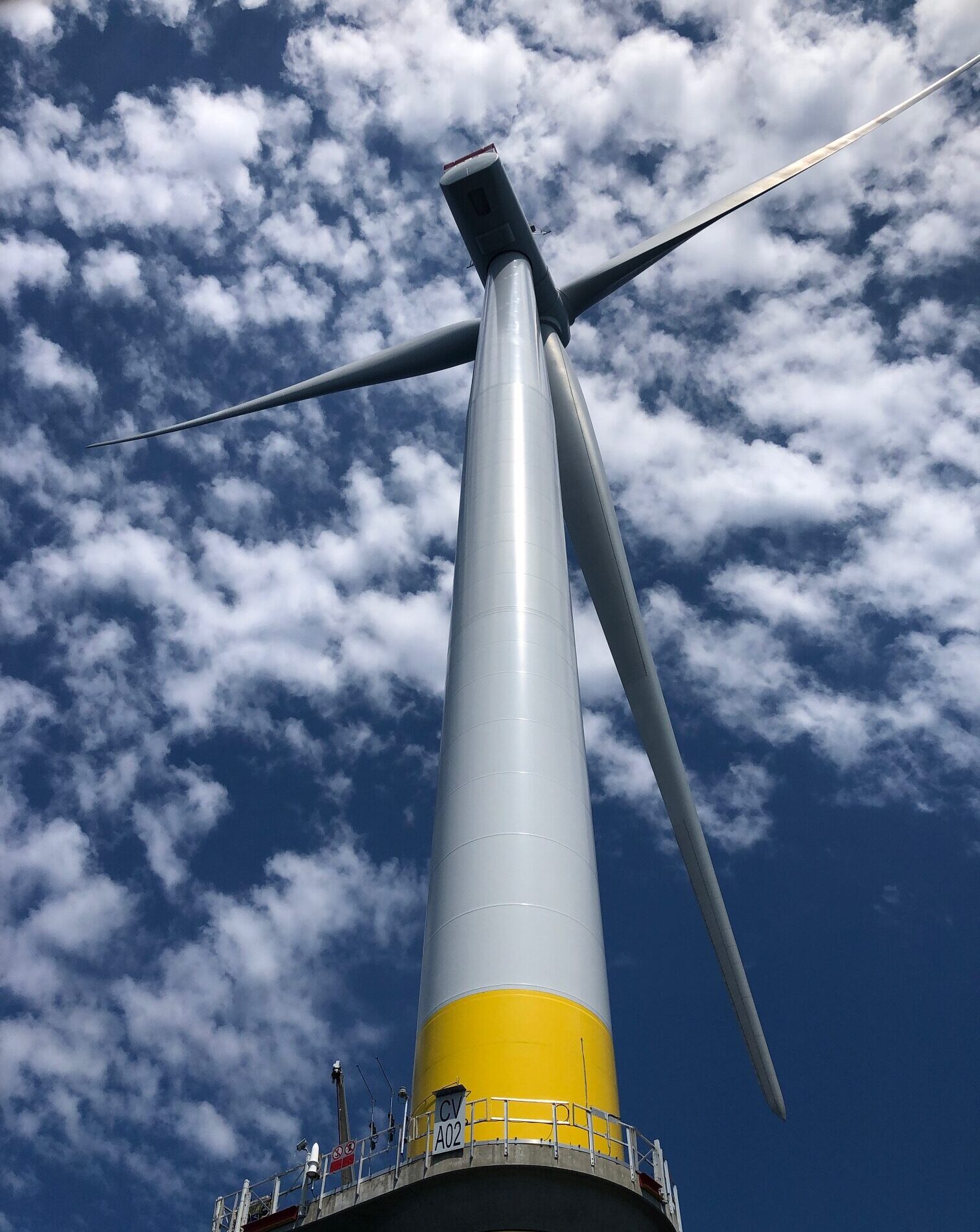 Dominion Energy spent $300 million to erect the two wind turbines now standing about 27 miles off the Virginia coast, a sum that could never be justified by the 12 megawatts of generating capacity they add to the grid— enough to power only 3,000 homes. The real benefit will come later, when Dominion builds a proposed 180-turbine wind farm expected to generate 2,640 megawatts of capacity, enough to power up to 600,000 homes, at a projected cost of $7.8 billion.

Thanks to the data gathered from the two experimental turbines, Dominion officials say it will need 40 fewer of the multimillion-dollar turbines than it had originally anticipated, a savings of hundreds of millions of dollars. Also, from the experience of leasing an expensive, hard-to-book installation vessel, Dominion is investing $500 million, risking shareholders’ money not ratepayers’ money, which will serve other East Coast windfarm projects as well as Dominion’s at a lower cost than chartering a European vessel.

Company officials say they have learned other odds and ends from the experimental turbines that will inform their safety and environmental efforts going forward.

Bacon’s Rebellion and other media outlets got an in-depth briefing from Dominion executives Wednesday during an excursion Wednesday to view the two turbines up close. Other than five machines off the coast of Block Island in Rhode Island, the two turbines are the only ones operating off the East Coast. Unlike the Block Island project, which is built in state waters, the pilot turbines are the first to be built in federal waters, and will have a major influence on the formation of regulations guiding offshore wind development in federal leases.

The media tour was part of a larger public outreach initiative as Dominion embarks upon seeking regulatory approval for a transmission line that will plug the wind farm into its electric grid. Electricity from the turbines will be converted into usable form in three offshore substations. A cable buried under the seabed will come ashore at Camp Pendleton in Virginia Beach. From there, Dominion has mapped out six alternative routes through a heavily developed section of Virginia Beach to its connection point at its Birdneck substation. If the history of transmission-line approvals is any indication, Dominion can expect considerable neighborhood opposition. 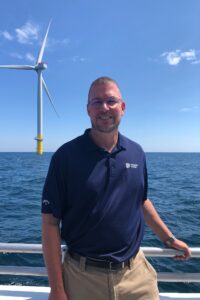 The twin turbines, whose propellers reach 600 feet high, have been spinning and gathering data since October. They haven’t yet been exposed to the acid test of weathering a hurricane, but early indicators are favorable, says Kevin Carroll, a former U.S. Coast Guard captain whom Dominion tapped to take charge of its offshore wind operations & maintenance.

Carroll says the turbines, which he refers to affectionately as his “wind babies,” have had 97% “availability,” which means they have been available to generate electric power from wind 97% of the time. Also, they are operating at a higher “efficiency” rating than forecast — 54% compared to the projected 35% — which means that they are generating significantly more electric power. With that knowledge, Dominion has pruned the number of wind turbines it proposes to build in its Virginia Coastal Offshore Wind Project from 220 to 180.

That project is still pegged at an estimated $7.8 billion cost, as it has been for a year or more. Bacon’s Rebellion asked if the project price will come down to reflect the smaller number of turbines needed. Carroll responded: “It is expected that decreasing the number or turbines will reduce both construction and operation costs.” 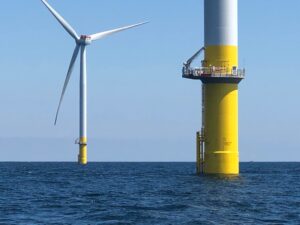 Of all the wind-turbine projects in the world, none have been preceded by a pilot project like this one. Carroll made the case that the company has learned much from the twin turbines that will enable the construction and operations of the wind farm to proceed more smoothly.

The installation of wind turbines occurs in several phases. The first is putting the turbine foundation into place. This requires the services of a highly specialized vessel that stabilizes itself on stilts reaching to the seabed and pounds the foundation into the seabed like a pile driver. At present, these vessels are owned and operated by European companies, where they are in tremendous demand. They are expensive to lease, if they can be procured at all. Installing the two experimental turbines required relocating a vessel across the Atlantic Ocean. That experience convinced Dominion that it would be cost-effective to build a vessel to serve the burgeoning East Coast offshore wind industry.

The Dominion parent company of the regulated Virginia utility is investing roughly $500 million to build the first in Brownsville, Texas. The company announced earlier this month that the Charybdis, which is expected to be seaworthy by 2023, will undertake its first work on two offshore wind farms in the Northeast — Revolution Wind and Sunrise Wind — before focusing on Dominion’s own wind farm between 2024 and 2026. 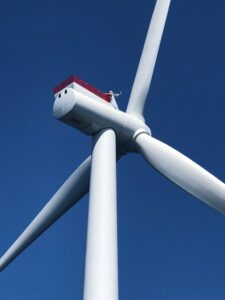 View of the “nacelle,” atop the wind-turbine column, which converts the movement of the propeller into electricity.

The pilot project also demonstrated the feasibility for the first time in U.S. waters of a new technology designed to dampen the sound created by driving the foundations into the seabed. To avoid damage to marine life, Dominion laid two hoses around the foundation that emitted air bubbles, creating acoustic curtains. Measurements found that the “double bubble curtain” significantly reduces the decibel level of the pounding, and Dominion will use the technique when it constructions the wind farm.

The pilot project also represented the first time that a U.S. wind farm developer has walked a project through the Bureau of Ocean Energy Management (BOEM) regulatory process. Environmental and safety regulations based on real-world experience should smooth the path for other wind farm projects moving forward., Carroll says.

Carroll and his team used the pilot turbines to test the use of drones for close-up inspection of the massive blades. They discovered how quickly the rocks piled around the foundation created an artificial reef that supports marine life. Collaborating with aviators, he has learned how best to position the blades to facilitate flight through the wind farm. Working with local fishermen, he has developed protocols to allow fishermen to continue fishing near the turbines without creating safety issues.

The pilot projects have even alleviated one of the biggest fears associated with wind turbines. The fast-moving propeller tips, which move at speeds of 15o to 180 miles per hour, have killed thousands of birds on shore. But Carroll says birds are exceedingly rare that far from the coast. Not one bird was spotted during the media tour. The bright red rails on the turbine observation platform show no signs of bird poop. Not a single bird kill has been documented.

This entry was posted in Energy, Uncategorized and tagged Dominion, James A. Bacon, Wind power. Bookmark the permalink.