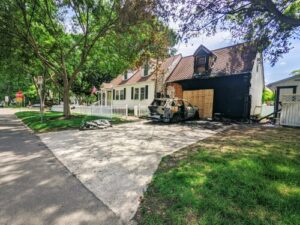 Oh, you haven’t heard about the arsons? Buckle up.

Last Friday night, as rain drenched Norfolk, Patrick and Tiffany McGee and their two young sons were watching TV in their picturesque Cape Cod with a picket fence on the corner of Redgate and Claremont Avenues in West Ghent.

According to a witness report filed by Patrick McGee, Tiffany saw a figure outside of their home and by the time her husband — a former Navy SEAL — opened the door and sprinted outside he found their two cars engulfed in flames. Patrick got his family out of the back of the house and to safety while neighbors who’d gathered near the inferno called for help.

The fire trucks arrived, one after another, and finally put out the conflagration which had spread to the attached garage and nearby trees.

When it was over, the McGees’ Mini Cooper had been incinerated, their Jeep Grand Cherokee was just a shell, their garage was charred and their house was uninhabitable due to the gas and electricity being cut.

No, the fire marshal isn’t ready to say this leafy neighborhood has a serial arsonist at work, but four car fires in the past year?

Two separate car fires in the past two weeks? On the same block?

If you read the Next Door App for Ghent you know that people are frightened. They’re sharing information about suspicious characters in the neighborhood and sending good wishes to the McGee family.

Yet the City of Norfolk has yet to post an urgent bulletin asking for help in solving the crimes.

When I talked to him yesterday, Fire Marshal Nicholas Nelson said he’d been working on almost nothing but these “suspicious fires” for the past two weeks and that multiple agencies were involved in the investigation. Evidence has been sent to the state labs and investigators in Norfolk are poring over footage from nearby surveillance cameras and home security systems.

“This is a top priority,” Nelson told me.

Could this be an individual seeking revenge on specific homes in the neighborhood? I asked. Nelson said he wasn’t ruling out anything.

Anyone who was near Claremont and Redgate Avenues last Friday night around 9 p.m. and saw anything suspicious should call the Fire Marshal at 757-664-6604.

Look, someone is setting cars on fire, dangerously close to homes. Last weekend, one of these fires leapt to a house with a family with small children inside. This could have turned tragic in a hurry.

When I talked to Tiffany McGee on Wednesday she said she and her husband “know it’s arson” and that they’re staying in Virginia Beach for the time being, “where we feel safe.”

Someone knows something. Tell the authorities. Solve the mystery.

Send this sick person to prison.