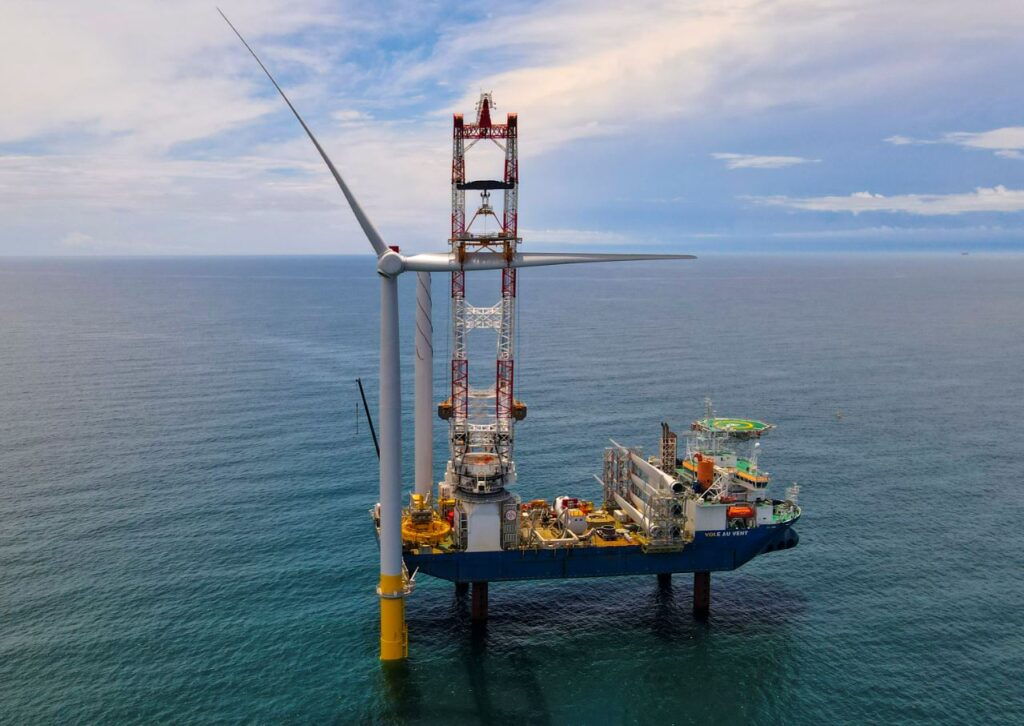 The Luxembourg-flagged Vole Au Vent is seen here installing one of Dominion Energy’s two experimental wind turbines 27 miles off the Virginia coast last year. Photo credit: Dominion. An American-made vessel will install the next 180 or so turbines.

The primary justification for spending $7.8 billion to build a wind farm off the Virginia coast at a significantly higher cost per kilowatt than other energy sources is to advance Virginia’s goal of achieving a zero-carbon electric grid by 2050. But an important secondary consideration is the hope that the project will jump-start the creation of a new industry in Hampton Roads serving the emerging East Coast offshore wind industry.

That case is a little harder to make these days. When Dominion decided to invest $500 million in building an offshore wind-turbine installation vessel, none of Virginia’s shipbuilding companies was interested. All were booked up with Navy contracts. The vessel, named after the mythical Greek sea monster Charybdis, is being constructed in Brownsville, Texas.

Kevin Carroll, Dominion’s manager of offshore Operations & Maintenance, still professes optimism that the offshore wind farm will give a big boost to the Virginia economy. “Our hope is to get more supply chain activities in Hampton Roads,” he told Bacon’s Rebellion Wednesday during a media tour of the company’s two experimental turbines. But the half billion-dollar chunk of business for constructing the Charybdis won’t be part of the mix.

The Charybdis will be home-ported in Hampton Roads, but it will spend most of its time on location. The vessel, which is being financed by the Dominion Energy parent company, not Virginia ratepayers, is expected to launch in late 2023. It will deploy first in New London, Conn., in support of the Revolution Wind and Sunrise Wind projects co-developed by Eversource and Ørsted.

Meanwhile, every state pushing a wind farm off its coast is hoping to grab a piece of the maritime supply chain.

Indeed, Connecticut will get the first crack at building that supply chain. The Charybdis will work from Connecticut’s State Pier in New London. A Dominion press release quoted Connecticut Governor Ned Lamont as saying, “All of this activity assists in advancing our state’s clean energy economy and helps position New London as a hub for the industry, delivering jobs and economic development to the city and Connecticut overall.”

Meanwhile, New York hopes to parlay the fact that it has five offshore wind projects in the works, more than any other state, into economic development. Said New York Governor Mario Cuomo: “New York remains steadfast in its commitment to further grow the burgeoning offshore wind industry in the United States and we will continue to work with our regional partners to unlock the enormous potential for green energy to create jobs and build a cleaner future for all.”

Still, Dominion’s Carroll says Hampton Roads has advantages that no Northeastern port can match. First, Virginia’s ports have the deepest channels. Second, its bridge-tunnels allow vessels to access the open waters of the Atlantic Ocean unobstructed by bridges. Because installation vessels transport the tower components of the wind turbines in a vertical posture, they need considerable clearance.

Between 2024 and 2026, the Charybdis will be working off the Virginia coast during the construction phase of Dominion’s 180-turbine wind farm. How many of the related 900 construction jobs will go to vendors, subcontractors and suppliers based in Hampton Roads as opposed to New London or elsewhere remains to be seen.

This entry was posted in Economic development, Energy and tagged James A. Bacon, Wind power. Bookmark the permalink.