What a Long, Strange Trip It’s Been 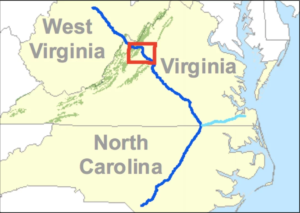 Back in the winter of 2015, Craig Vanderhoef, a former Navy captain, got a disturbing surprise in his mailbox at his retirement home near Afton in Nelson County. A letter from Dominion Resources noted that it wanted to survey his land for a new 600-mile-long natural gas pipeline.

On two occasions, he wrote the utility telling them no. Then he got another surprise. A sheriff’s deputy knocked on his door to serve him with papers notifying him that Dominion was suing him to get access to his property.

In short order, about 240 Virginia landowners were on notice that they too might be sued for Dominion’s proposed Atlantic Coast Pipeline. The county sheriff was notified that he, too, was being sued, although it was an error.

Thus, the stage was set for one of the nastiest environmental and property rights battles in Old Dominion history.

It centered around the Atlantic Coast Pipeline that would run from Harrison County, W.Va. across the rugged Appalachians, down through some of the most peacefully bucolic land in the Virginia., to Union Hill, a mostly African-American community in Buckingham county and on into North Carolina, running through the Tar Heel state’s mostly African-American concentration along its northeastern border with Virginia.

In other words, the project partners were targeting people, some of whom were poor minorities, unused to big industrial projects and legions of overpriced lawyers.

The project, whose partners at the time included southeastern energy giants such as Duke Energy and the Southern Company, was aimed at tapping vast quantities of cheap gas that fracking drilling methods had created in the Marcellus Shale formation in West Virginia and Pennsylvania.

To Richmond-based Dominion, it became a rallying cry for natural gas. About that time, Dominion was also repurposing its Cove Point Liquefied Natural Gas facility on the Maryland shore of the Chesapeake Bay from import to export and was picking up large gas pipeline networks in far-away spots like Utah.

The pipeline was just one of several ugly controversies that Dominion had tossed itself into, coming off to many as an inconsiderate bully. It demanded on handling coal ash disposal on watersides its cheap, minimalist way. It insisted on putting a high voltage line across the James River near historic Jamestown. It deployed its deep-pocketed lobbyists to spread money around Virginia lawmakers.

And now, after all that, the comeuppance has come. On July 5, Dominion and Duke announced that the ACP, whose price tag had risen from $5 billion to $8 billion, was being canceled. This was after Dominion had poured $1.8 billion into legal wars over property rights, environmental permits and propaganda campaigns touting the pipeline as a jobs creator.

The reversal had been coming for a long time. Dominion kept losing battles as it faced, a well-financed, well-organized opposition, let by citizen groups and the Southern Environmental Law Center. Opponents claimed that the ACP would kill wildlife, hurt ground water and release vast quantities of methane into the air, exacerbating climate change.

Most damning of all, the opposition kept noting that the extra natural gas was not needed. There was a glut and prices were dropping. Utilities needed to reposition themselves with renewables such as wind and solar. Tellingly, the Southern Company, a former partner, announced it was leaving the project several months ago.

To be sure, the ACP had won some skirmishes such as winning approval from the Federal Energy Regulatory Commission. The U.S. Supreme Court ruled its way last month. Cheerleaders, some related to such Koch Organization fossil fuel interests including the Thomas Jefferson Institute for Public Policy, the Heartland Institute and the Committee for a Constructive tomorrow, relentlessly kept up their climate change denying, anti-Democrat, anti- renewable mantra.

As late as June, Paul Dreissen of the Committee for a Constructive Tomorrow was writing in Bacon’s Rebellion: “Pipeline project developers Dominion Resources and Duke Energy should receive the USFS (U.S. Fish & Wildlife) and other permits relatively soon – and have the pipeline in operation by early 2022 – unless a Biden administration takes over in 2021 (with AOC as woke climate and energy advisor to Biden and Democrats) and imposes Green New Deal bans on drilling, fracking, pipelines, and eventually any use of natural gas, oil and coal..”

About the same time, Ann Nallo, a pipeline spokeswoman, touted the same line. She said the favorable Supreme Court decision is  an “affirmation for the Atlantic Coast Pipeline and communities across our region that are depending on it for jobs, economic growth and clean energy” and that they “look forward to  resolving the remaining project permits.”

Statements like these are all the more curious given the surprise cancellation. Did someone not get the memo?

As one news outlet put it, “In a call with investors Monday, (Dominion leader) Farrell said the company wants to focus on its renewable energy portfolio. It is hoping to generate 70% of its energy from renewable sources by 2035 and hit ‘comprehensive net-zero carbon targets’” by 2050, he said.

Meanwhile in a related move, Dominion announced it was selling most of its natural gas assets to Warren Buffett’s Berkshire Hathaway group. One conclusion: investors are skittish about ACP-style projects so Dominion is bunting towards regulated ones with guaranteed rates of return. That way, its customers shoulder risks.

So, we have the drum-beating about the wonders of natural gas from right-wing think tanks and corporate flaks one day and Farrell’s astonishing change of course the next. Some believe that Dominion read the tea leaves and concluded that Donald Trump was self-destructing so completely that he has no hope of being reelected.

Left in its wake have been years of strife that were borne chiefly by quiet property owners such as Capt. Vanderhoef who only wanted a peaceful retirement.