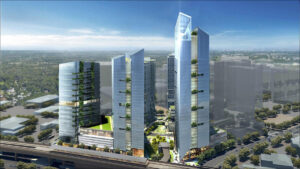 Not your grandfather’s suburb. Artist’s rendering of The View at Tysons re-development project.

The suburbs are less white than they used to be. Northern Virginia, unsurprisingly, is leading the way. As of 2018, 49.4% of Northern Virginia residents identified as members of a racial minority, up from 36.5% in 2010. NoVa residents are younger, and a higher percentage, 27%, have been born in another country. Youth and ethnic diversity are demographic attributes that are strongly affiliated with Democratic voters.

The demographic shift is accompanied by changing tastes of suburban dwellers, many of whom no longer place a premium on living in a single-family dwelling in a subdivision. Increasingly, suburbanites are seeking “walkable urbanism” — enclaves where they can live in apartments or condos, don’t have yards to care for, and can stroll down the street to a pub or grocery store.

Weatherford argues that the new suburbia signals a complete reshaping of what we traditionally have thought about the suburbs. Virginia, he quotes Rachael Bitecofer at Christopher Newport University as saying, is “in the middle of a long-term realignment. It is going to have big ramifications.”

Virginia’s traditional urban cores have prospered over the past decade as young people decided that city living was more exciting than life in the burbs, and as businesses relocated to urban locations in order to hire them. Suburban communities, whose land use patterns were locked in place with rigid zoning codes, were slow to respond. But suburban county governments, pushed and prodded by market-sensitive developers, are getting the message, and they’re allowing more walkable urbanism to develop. This process is farthest along in Northern Virginia, where Arlington pioneered suburban re-development around the Washington Metro system three or four decades ago and Fairfax County has committed to a massive make-over of the Tysons area. But more walkable urbanism is being developed in Hampton Roads and the Richmond metro as well.

County jurisdictions still have competitive advantages over center cities. Their tax rates tend to be lower, schools better, crime less ubiquitous, and municipal services more responsive. When combined with walkable urbanism, those attributes make a powerful combination for attracting new residents. As a consequence, the migration back into city centers has slowed in recent years.

The suburbs, once associated with white flight, are open to foreigners and minorities. Nearly 60% of African Americans now live in suburbs, points out Fabrizio Fasulo, director and chief economist at Virginia Commonwealth University’s Center for Urban and Regional Analysis. Nationally, one third of the country’s suburban population is composed of African Americans, Asians, and Hispanics. (In western Henrico where I live, students at the local elementary school, Maybeury, speak 40 different languages.)

Bacon’s bottom line: Virginia Business is on the mark. There are at least three broad sweeping lessons to be drawn.

Central cities, don’t get cocky. Urban-core localities enjoyed a decade-long renaissance because they had what the market wanted, walkable urbanism, and counties did not. The counties are catching on. Meanwhile, center cities — I’m talking to you, Richmond — still have high taxes, under-performing schools, and city services that suck. Better get your act together.

Republicans, reinvent yourselves. Democratic Party dominance in the suburbs is not some temporary phenomenon due to Trump Derangement Syndrome. It reflects fundamental demographic shifts. If the GOP is perceived as the rural white party, it will never recapture the suburbs. The GOP must reinvent itself as the prosperity-and-opportunity-for-all party or resign itself to permanent political-minority status. Given the determination of General Assembly Democrats to move Virginia to the left of California or New Jersey — something Virginia voters never bargained for — having a competitive Republican Party is more imperative than ever.

This entry was posted in Land use & development, Politics, Race and race relations, Uncategorized. Bookmark the permalink.