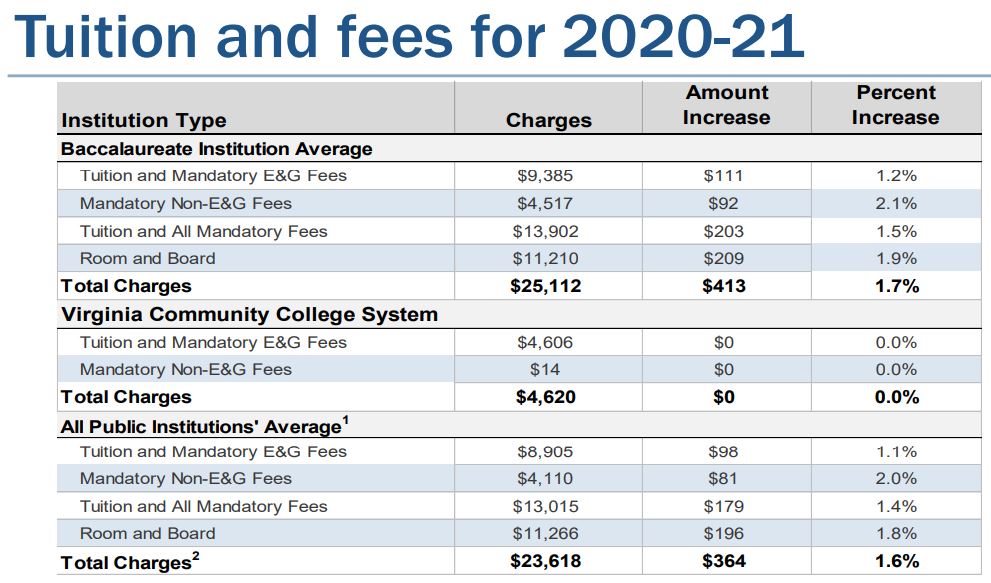 Source: “The State of Higher Education in Virginia,” Oct. 20, 2020, presentation to the Senate Finance and Appropriations Committee.

During what may be the sharpest economic contraction in United States history, Virginia’s public colleges and universities managed to increase their tuition & fees by 1.6% this year — 1.7% if you don’t include the community colleges, which enacted no increases at all. Despite the challenge of the COVID-19 epidemic and the recession, enrollment at Virginia’s public four-year institutions declined only 0.2%, according to data presented by Peter Blake, executive director of the State Council of Higher Education for Virginia, to the Senate Finance and Appropriations Committee today.

I have to credit Virginia’s public universities with their resilience. I’ve been predicting for several years that at some point they would hit a wall of resistance to the ever-escalating cost of attendance. Sooner or later, I thought, students and parents would rebel. Well, that hasn’t happened yet. If the public colleges can survive this year’s double whammy, they may be impervious to market forces. (Hat tip: Steve Haner)