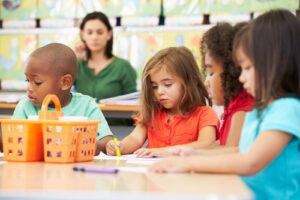 Those who have followed my reporting know that I am passionate on the subject of helping poor children do better in Virginia’s schools. They also know of my disdain for Virginia’s hyper-political education establishment.

Well, the Northam administration has turned the Virginia Preschool Initiative Plus pilot into a full fledged program.

In doing so, it has finessed the needs of the children by ignoring the results of that pilot to satisfy the political desires of the progressive education establishment.

Pilot overall findings. The final report is in two parts: one on the pilot and its outcomes and the other on costs vs. benefits.

Four personal observations from the final report on the pilot:

The final cost-benefit study was even less encouraging.

Our estimates of per-child expenditures and per-child benefits are all measured in present-value dollars, which means that we account for the lower value of dollar costs or benefits that accrue in the future compared with those that are realized in the present.

The analysts then went on to explain in detail that the inputs were so threadbare, flawed and short term that the model outputs may not prove valid and “would require ongoing evaluation of the impacts of participation in VPI+”.

The political findings. From this thin gruel, the Northam Administration declared victory and is pushing ahead with statewide implementation.

They did this for one reason — the education schools and education non-profits want to do it this way.

Results for kids and their families.  I want these kids helped. I don’t want to give up on pre-K as a concept for the neediest kids.

I personally think the pilot was conducted in conditions that were not going to let it work.

Discipline and absenteeism killed the pilot

In reading the full reports, there were two issues that the VDOE and the designers refused to face:

For example, family engagement coordinators made home visits, provided families with alarm clocks, developed an attendance improvement plan or contract, and helped families develop routines to help improve attendance. Despite these efforts, more than a third of children across divisions were reported to be chronically absent and may not have attended preschool regularly enough to get the full benefits of the program. Attendance may have been affected by limited transportation options in some school divisions.

In February 2018, VDOE provided guidelines for the prevention of suspension and expulsion of young children and supporting children with challenging behavior in early childhood settings.

Despite these supports to address the needs of children with challenging behaviors, teachers consistently reported wanting additional PD on this topic. (Author’s note: that is the most anodyne way imaginable of reporting that teachers were beyond frustrated with class disruptions.)

Those approaches are VDOE dogma.   The instruction methodology may have provided better results in a decent teaching environment.

In my humble opinion, those two issues, unaddressed, killed the results.

The writers of the report either did not share that opinion or did not want to state it directly to a VDOE that has no intention for dogmatic reasons of changing its position on discipline or attendance.

Regardless, going forward with major investments in a program with so few documented benefits will drive out any better method in the future.  The evidence so far does not show that this is the best, or even a good, way to do it.

Finally, if you think this will only affect 4-year-olds, you are wrong. Virginia’s Birth-to-Five Early Learning and Development Standards were approved by the Virginia Board of Education in March 2021.

In July 2021, VDOE became the regulator and licensor of every child care provider in Virginia.

Background. In January 2015, the Virginia Department of Education (VDOE) was awarded a 4-year federal Preschool Development Grant (PDG) to expand high-quality preschool programs for at-risk 4-year-olds in 11 of Virginia’s 132 school divisions that ranked highest in need on key indicators. Virginia was one of 18 states that received PDG funds to increase access to high-quality preschool.

The evaluation reports examined VPI+ program implementation and impacts across the four years of the initiative (beginning in the 2015–2016 school year and ending in the 2018–2019 school year).

Read them again. They add up to a good start, but the advantage was wiped out by the spring of first grade. I recommend you read the entire report.

You will find out a lot.

“Children were only eligible for VPI+ if their families’ incomes were at or below 200 percent of the Federal Poverty Level (FPL) and they met the age criteria – 4 years old by September 30th of their preschool year. More than half of enrolled children were from households living in poverty (at or below 100% of the FPL), ranging from 53–66% across the 4 years of the initiative. Three- fourths of mothers of VPI+ children reported having completed high school (ranging from 75– 77% across years). According to family enrollment forms, about half of the children were Black or African American (ranging from 46–55% across years), around a quarter were Hispanic (ranging from 24–29%), and less than one fifth were White (ranging from 14–18%).  Most children spoke English at home; however, about one fourth to one third of children (ranging from 26–32% in any given year) were dual language learners who spoke a language other than English at home (typically Spanish). Approximately 7–9% of VPI+ children were identified as having a disability or delay and had an Individualized Education Program (IEP) at some point during the preschool year.”

I find that mix to be right to target and evaluate the program. The SRI team, however, noted:

That replicates the experience of charter schools. SRI attempted to adjust the findings for those differences, but did not claim success in those efforts.

The resources and time invested in the pilot program were extraordinary. It is not clear that a statewide program could replicate that environment. Examples:

“Overall, VPI+ teachers received more than 40 hours of professional development per year on the use of formative assessment and the curricula in Years 1–3, with hours of training decreasing in the final year of the initiative.”

“VPI+ programs received funding to provide a comprehensive set of services to children and families to increase family engagement in children’s learning and to meet the health, mental health, and nutrition needs of children and families. VPI+ programs included a family engagement coordinator who developed an awareness of families’ needs through home visits, helped families access comprehensive services, and strengthened families’ positive connection to their child’s school.”

Longer term outcomes. The SRI team assessed longer-term impacts of VPI+ participation on children’s literacy skills, school attendance, and disability status in the spring of kindergarten and again in the spring of first grade.

“Children who attended VPI+ performed better on literacy assessments in the fall and spring of kindergarten than did children who did not attend VPI+, but by spring of first grade the differences were no longer statistically different.”

VPI+ children were also more likely to be identified as having a disability by the end of kindergarten than peers who did not attend VPI+.

I expect from personal experience that RAND, and Dr. Lynn Karoly in particular, were responsible for the quality of the benefit-cost analysis.

As I mentioned in the opening, the lifetime earnings of each child were estimated to exceed the up-front cost of the VPI by only $4,000 per child. The analysts went explained in detail that the modeling inputs were weak, and that the model outputs may not have much validity and “would require ongoing evaluation of the impacts of participation in VPI+”.

I doubt RAND will be invited back.