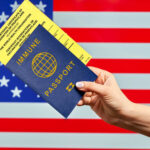 Want a peek at what some of the more authoritarian types in the U.S. have planned for you?

Look no farther than St. Vincent, a lovely little archipelago in the Windward Islands.

At least it used to be a lovely little island. On April 9 the most dangerous volcano in the Caribbean exploded, leaving much of the island uninhabitable.

Water supplies have been cut, airspace is closed due to volcanic ash and there are reportedly rivers of lava and debris racing down the mountainsides.

But get a load of this. On Saturday, Prime Minister Ralph Gonsalves made a startling announcement: Only those who could provide proof of a vaccination against Covid-19 could be evacuated to nearby islands. Cruise ships were standing by, ready to transport them.

Guess they can just choke to death on ash or be swept away from a pyroclastic flow.

This may be an extreme example of where we’re headed with vaccine passports. But after a year in which the unimaginable happened: American governors closed churches and schools, ordered people to stay in their homes and threw millions out of work by classifying their jobs as “non-essential,” absolutely anything is possible.

Imagine needing proof of a COVID-19 vaccine in order to go to a ballgame, concert or to board a domestic flight. Imagine being forced to sit in the back of your church — or in the hallway — without a passport.

If some have their way, that’s exactly where we’ll be. A country divided into the vaxxed and unvaxxed. A nation where those who cannot take the vaccine due to allergies or other medical conditions and those who simply don’t want to be vaccinated against a disease they believe is survivable are excluded from activities that were normal just a little more than a year ago.

The unvaxxed will be shunned, while those waving their vaccine passports will be welcomed back into society.

I’ve heard of businesses that are demanding workers get the vaccine before returning to the office. I know of one family that’s declared that unvaccinated relatives will not be welcome in their home this summer.

Unbelievable. If you’re vaccinated, why should you care if someone in your office or guest room is not?

It’s especially crazy considering that millions of us flew commercial airlines during the past year, without anyone being vaccinated. Suddenly the cabin doors will be closed to those without COVID passports?

This is just the latest authoritarian impulse generated by COVID hysterics. Vaccine passports would go a step beyond lockdowns and curfews and mask mandates. They would coerce reluctant people to receive an experimental medical treatment — the vaccines have not been approved by the FDA — in order to secure employment or travel.

This would also seem to be a violation of American medical privacy laws. Lawyers, start your engines.

Yes, I’ve heard the arguments that we already require certain vaccines for children to be enrolled in school and that travel overseas sometimes requires proof of vaccination.

This is different. Vaccines for childhood diseases, such as measles, polio, whooping cough were extensively tested by the FDA and given full approval. COVID vaccines are being administered under an Emergency Use Authorization. Not the same.

Nevertheless, the CDC says 77 million Americans, eager to get out of lockdowns and masks, are fully vaccinated. That’s 23% of the population. Millions more will be getting shots in the coming weeks.

Instead of blackmailing Americans with the threat of passports, perhaps the government should try something it hasn’t yet done: Deliver a little optimism.

Perhaps the president could promise that as soon as everyone who wants a vaccine has gotten it, he will urge governors to reopen the country. Fully and without masks.

Watch how fast people roll up their sleeves.