“The Last Romantic War,” a Review 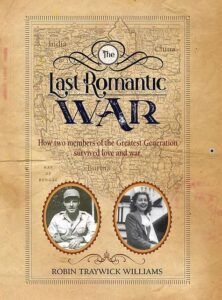 In the spring of 1986, I was given an old foot locker with the name Charles Faben Redd and V.M.I. emblazoned on it. Uncle Charlie had just died and the family had gathered in the stately parlor of his home in Studley, Virginia. At the age of 15, I had never inherited anything before and I wasn’t quite sure of what to make of this gift. Aunt Liz made a big production about how the contents of the foot locker were Uncle Charlie’s most prized possessions and he wanted me to have this. I waited until I got home to open that foot locker  I expected to find items of great monetary value. What a surprise! Inside the foot locker were very carefully arranged memorabilia from a long time back. A pair of black polished leather boots, a shako, trousers, a thick high collared blouse and coatee. A small box containing VMI collar tags, brass buttons, and a tarnished belt buckle. There was a mouth harp, a bundle of letters, a size-16 pair of track cleats, an old-fashioned Kodak camera, a thick scrap book, and a shoebox full of pictures. My initial disappointment gave way to wonder. I had a perfectly preserved snapshot into Uncle Charlie’s early manhood. The foot locker even smelled like Uncle Charlie. I now had answers to questions about Uncle Charlie I never got around to asking.

Author Robin Traywick Williams offers readers a priceless time capsule in her new book, “The Last Romantic War: How two members of the Greatest Generation survived love and war.” The story centers on the courtship of Flo Neher and United States Army Captain H.V. “Bo” Traywick with the backdrop of World War Two. In the spring of 1942, a young prom trotting girl meets a dashing Army Captain on a blind date at Fort Benning, Georgia. A handful of dates and a daring proposal on April Fool’s day, launch a romance with a fairy tale finish. A three-year pause between proposal and matrimony is punctuated by a roller coaster ride in the events of World War Two.

Award winning journalist and novelist Robin Traywick Williams is a graduate of Hollins College. Robin’s columns have appeared in the Richmond Times Dispatch and other Virginia newspapers. She is a major figure in Virginia’s equestrian history, having served as chair of the Virginia Racing Commission.  Robin’s extensive knowledge of horse racing and the gift of storytelling can be found in the award-winning novel “The Key to the Quarter Pole.”

The research behind “The Last Romantic War” is thorough, with a clear attention to detail. Many hours of recorded interviews, exhaustive exploration of World War II materials, and a careful selection of just the right anecdote makes for an authentic journey back to 1942. Robin’s diction and character dialogue places the reader in the living room of the Traywicks to hear the tales of Bo and Flo as if you were a member of the family “peanut gallery.”

As a teller of tales, Captain Bo Traywick often recounted for the children of the family of how he met their mother. “You know we met on April Fool’s Day,” he would say. Of course, Robin and her siblings could anticipate every sequence of this romantic tale. But it didn’t matter, the banter between Bo and Flo retelling the events of 1942 always made for a perfect family evening. The yarns of courtship, World War II in Burma, the Homefront, the extended families from both sides, and the many extra characters were never stale.

Bo and Flo instantly conjure up the images of movie stars from the Golden Age of the Silver Screen. Captain Traywick has the looks and bravado of Clark Gable along with the charm and chivalry of Randolph Scott. Flo Neher has the spark and wit of Vivien Leigh accompanied with the grace and serenity of Olivia De Havilland. Captain Traywick and Ms. Neher were accomplished dancers in the era of Swing and the Big Bands. One can imagine the good times on the wood parquet floors of the Officers’ Club at Fort Benning. The timeless sound of Glenn Miller classic songs such as “In the Mood” or “String of Pearls” puts the reader in a Fred Astaire and Ginger Rogers state of mind.

One of the real gems of “The Last Romantic War” is the art of courtship during the war years. It was a time when young people dated often and with a revolving door of partners. There was a refined and intricate ritual to courtship. Bo and Flo’s journey brings to life the excitement and electricity of finding “the one” after a long search. Robin Traywick Williams is able to uncover the melancholy, long hidden in tales, of a tumultuous passage between the engagement and the wedding. The courtship endures the joys of romance in exciting times, disappointment, heartache, reconciliation, separation, and long pauses between letters. The reader can fully experience this ball of confusing and powerful emotions that only the young can relate to.

Captain Traywick was deployed to India in 1942. His mission was to train Chinese soldiers and officers for the coming campaign against the Empire of Japan in Burma. The Burma campaign is a forgotten and uncredited chapter of World War II in the Pacific theater. Construction of the Ledo Road from Burma and into China was a task on the scale of building the Panama Canal or the Hoover Dam. Traywick and his companions had to battle malaria, an endless jungle, rugged mountains, and a determined Japanese resistance. Williams meticulously researched and wove together a compelling story of endurance, hardship, and eventual triumph.

A substantial portion of “The Last Romantic War” comes through the eyes of Flo Neher. After the passing of Bo Traywick in 2006, Robin’s mother is able to come forward and fill in some important spaces to this compelling story. Flo was an active member of women contributing on the Homefront during World War Two. Flo’s mother “Nana” Neher, provides wise counsel and support during a long and complex courtship. Above all, Flo’s interviews later in life help temper the tea pot of stories from Bo’s perspective. Flo’s frame of reference cools and soothes the story just as a tea cup and saucer should. This brings out a high degree of authenticity.

From time to time, I still open Uncle Charlie’s foot locker. I keep it organized exactly the way he packed it, too. It is a great window that takes me back to the youthful days of my favorite Uncle. Robin Traywick Williams book, “The Last Romantic War,” is more than a window looking back some eighty years now. It is a time portal that places the reader on the “yellow brick road” that Bo and Flo followed. I was fully immersed in the story of the Greatest Generation and I enjoyed every page of it. This is a book for the young and old, for it spans culture and generation gaps. “The Last Romantic War” transported back to an exciting time in America and to a group of Americans who made the twentieth century the American century. The last page of the book features Bo and Flo in their golden years. The photograph accurately captures the last words of the novel: “and they lived happily ever after.”

You can order the book directly from the author here.

This entry was posted in Book review. Bookmark the permalink.