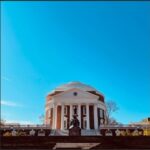 The fear, the dread that crept across the University of Virginia grounds Sunday night as reports of a fatal shooting spread and students were cautioned to shelter in place.

The gunman was on the loose. He was armed and dangerous.

The manhunt for Christopher Darnell Jones Jr, lasted 12 terrifying hours. He was arrested in Henrico County and charged with three counts of second-degree murder and three counts of use of a firearm in the commission of a felony.

More charges are coming. Two other young men — also football players — were wounded in the shooting. One of those students was in critical condition.

While thousands of UVA parents were relieved when their kids finally called home to say they were safe, three sets of parents received unspeakable news. Their sons, football players, had been shot to death.

The father of one of the deceased expressed the depth of his grief to The Washington Post:

“I wish it was me instead of him,” said Thaddeus Lavel Davis, his father. Lavel was his firstborn child.

Many troubling questions surround the killings. Suspicions swirl around the alleged shooter, who was reportedly in hot water after he failed to report to UVA a concealed carry violation.

Yet he was still enrolled.

There will be time for blame and recriminations, if necessary, in the days to come.

If you’re the praying type, whisper a prayer for these guys and their broken-hearted families.

It’s all we can do right now.

This entry was posted in Crime , corrections and law enforcement, Education (higher ed) and tagged Kerry Dougherty, University of Virginia. Bookmark the permalink.