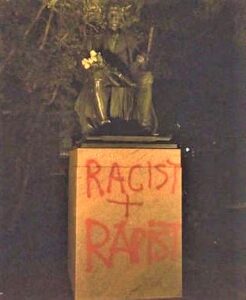 The University of Virginia administration and Board of Visitors is caught in the crossfire as alumni push back against the radicalization of the university and denigration of its founder Thomas Jefferson. In the previous post, I published a letter written by Thomas M. Neale and co-signed by 200 others condemning the Board of Visitors resolution to “contextualize” the Jefferson state on the UVa grounds.

Rector James B. Murray Jr., and President James E. Ryan wrote the following letter in response, which I offer with minor edits. — JAB

The actions recommended by the administration and taken by the Board have been years in the making. In response to growing interest from our students, faculty, and community, the University has for some time now been addressing more fully its history and the life of Thomas Jefferson. Our work has been similar to the efforts of Monticello, more fully portraying Mr. Jefferson’s life to provide a complete picture of his (many) accomplishments, as well as his shortcomings, and to make these facts available to a larger audience.

Erecting the beautiful and moving Memorial to Enslaved Laborers that sits in the
landscape southeast of Brooks Hall is a visible testament to those efforts. This memorial has become a popular destination for community members as well as tourists. It has received national and international acclaim for its design as well as its honest depiction of the lives of the slaves who lived and worked at the University. We have taken many other less publicized initiatives to explain the history of this University and the people who contributed to its creation and operation – people who have not often been recognized in earlier histories.

The statue on the north side of the Rotunda has, particularly in the last few years, become a touchstone for concerns about the University’s complex history with regard to race. This new recognition is due in part to this being the site where, on August 11, 2017, our students and some faculty and staff were surrounded by torch-bearing white supremacists yelling epithets and threatening harm. As you may recall, several people were injured, and others traumatized; and then too the University was criticized by alumni and
others for not doing enough to prevent the incident. Whether or not we all consider it reasonable, some members of our community have since called for the removal of the statue. This idea gained greater urgency in light of the outrage and protests that began in July. The Board and administration oppose the idea of removal; instead we seek a more informed approach.

We expect that whatever is done to contextualize the statue (perhaps a plaque) will merely provide additional historical facts by which we all can better understand Mr. Jefferson. We expect it to make no judgments about how the public will remember and value his numerous and formidable accomplishments. The additional historical facts are not in doubt or dispute. They will be no more than historical truths. Adding to the statue’s memorialization of Thomas Jefferson will further serve our purposes as a University – to educate and to enrich history. Indeed, that was Mr. Jefferson’s admonition to us:
“[Universities are] based on the illimitable freedom of the human mind. For here we are not afraid to follow truth wherever it may lead, nor to tolerate any error so long as reason is left free to combat it.” We should always defer to each individual’s interpretation, allowing each to make his or her judgment as to Thomas Jefferson’s place in this country’s history.

We think the words of the Board resolution convey this message. We have attached the resolution to this letter. In the memo from University leadership to the Board of Visitors asking the Board to support a number of actions, including the resolution on the statue, historian Annette Gordon-Reed is quoted from an interview she gave; we believe her thoughts appropriately balance the inconsistencies of Jefferson’s life:

There is an important difference between helping to create the United States and
trying to destroy it. Both Washington and Jefferson were critical to the formation of the country and to the shaping of it in its early years. They are both excellent candidates for the kind of contextualization you alluded to. The Confederate statues were put up when they were put up [not immediately after the war but largely during periods of civil rights tension in the 20th century], to send a message about white supremacy, and to sentimentalize people who had actively fought to preserve the system of slavery. No one puts a monument up to Washington or Jefferson to promote slavery. The monuments go up because, without Washington, there likely would not have been an American nation. They put up monuments to T.J. because of the Declaration of Independence, which every group has used to make their place in American society. Or they go up because of T. J.’s views on separation of church and state and other values that we hold dear. I think on these two, Washington and Jefferson, in particular, you take the bitter with the sweet. The main duty is not to hide the bitter parts.

This is a moment when we believe the University of Virginia can fulfill its
responsibilities to educate others about history. But we also recognize that we are evolving as a culture and as a university. We should, and must, address the current and future needs of our community and nation. We must try to contribute, as we can, to a more open and just society.

As an institution we are proud of our association with Thomas Jefferson. His
contributions to the creation of modern-day democracy and to the principles of religious freedom know few equals in world history. We believe that contextualizing the statue is an appropriate action. To be clear, removing any statue of our Founder or disassociating ourselves from his remarkable legacy would be anathemas to the Board of Visitors or the University administration.