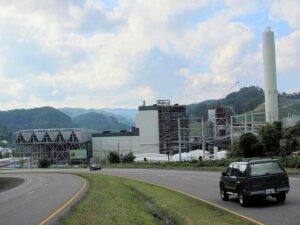 Back in 2007, Dominion Energy was touting its new hybrid generating plant near St. Paul in Southwest Virginia as the wave of the future because it would burn coal and wood using advanced fluidized bed technologies.

But for eight months this year, the 624-megawatt Virginia City Hybrid Energy Center operated at only 20% and has never reached more than 65% capacity since going online in 2012.

Now, the utility must face the fact that it may close the plant, according to a new report by the non-profit Institute for Energy Economics and Financial Analysis. Dominion has said it intends to keep the plant open.

If it closes, it would affect 153 full-time jobs and 400 additional ones. Localities would lose from $6 million to $8.5 million in taxes.

The Institute undertook its research at the request of Appalachian Voices, an environmental group. It is based on testimony provided to the State Corporation Commission by Atty. Gen. Mark Herring that ratepayers would have to shell out $472 million more than the plant is worth over the next 10 years.

I visited the plant site in 2007 for Bacons Rebellion. Then, as now, it is highly controversial. Thirteen years ago, there were concerns that it would increase carbon pollution, accelerate disastrous mountain-top removal coal mining and wasn’t needed.

More recently there have been major strides in shunning fossil fuel plants for the same reasons. Dominion is going along with legislation to use solar and wind projects to go carbon-free by 2045.

What’s curious is that some on this blog, including one with ties to a think tank funded in part by the fossil fuel industry, argue that fossil fuel is necessary because renewable sources, wind in particular, cannot be relied upon for steady energy generation. They complain that ratepayers are getting stuck with the bill for “boondoggles” such as a large wind turbine farm planned off of Virginia Beach.

What, however, is a bigger boondoggle? The Virginia City plant or offshore wind which could add thousands of new jobs in Hampton Roads?