The Nonsensical Narrative of an Impending White Minority 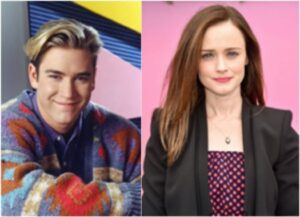 America’s media and cultural elites are increasingly obsessed with race and ethnicity, viewing every public policy issue through a racial prism. But the American people aren’t cooperating. In their real-world behavior, race and ethnicity are becoming less important. The distinction between “whites” and “Hispanics,” never clear to begin with, is steadily eroding. Meanwhile, the increase of intermarriage between all racial/ethnic groups has given rise to a category of people, numbering in the millions, who identify as members of two (sometimes more) races.

Those are the thoughts that come to mind as I read Hamilton Lombard’s latest contribution to the StatChat blog about the misleading narrative of a disappearing white majority.

As Lombard writes, media headlines have touted a population tipping point in which the “white” majority of Americans will be overtaken numerically by minorities of other races and ethnicities. This narrative, I would add, has fed the fears of white supremacists who vow they will not be “replaced” as well as the aspirations of leftist politicians who believe they can ride minority grievances to power.

But the narrative is misleading, Lombard says. The “white” majority seems to be slipping away only because so many white and half-white Americans are counted as minorities in the census data.

Consider actor Mark-Paul Gosselaar, for instance, best known as blonde haired heartthrob Zack Morris from the early-90s sitcom, Saved by the Bell. Most viewers would consider Gosselaar to be white. If Gosselaar, who once quipped, “People don’t know that Zack Morris is half Asian,” identified himself as both white and Asian on the Census, he would be tabulated by the Census as a person of “two or more races,” which is a category classified as a minority – thereby no longer counting him as white or Asian.

The same goes for Gilmore Girls star Alexis Bledel. While most people see the fair skinned, blue-eyed Bledel as white, according to the census categorization, she, too, would be in the minority category, because of her Hispanic heritage.

Here are the Virginia numbers from Census QuickFacts: 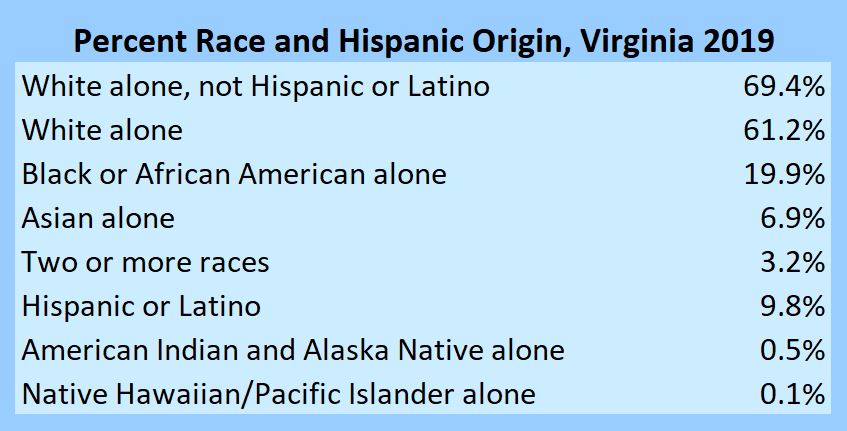 From this data we can conclude that of the 9.8% of Virginia’s population classified as Hispanic, 8.2 percentage points identify racially as white. The other 1.6 percentage points presumably identify as black or American Indian. Some Hispanics are descended from African slaves; some are of mixed white/Indian descent known as mestizos; and some are Native Americans. In Mexico 62% of the population identifies as mestizo and 21% as Native American, according to World Atlas. (Comparable percentages prevail in Central American countries.) I have seen zero reporting or commentary about how Mexican and Central American immigrants of mestizo or Native Americans background categorize themselves when they come to the United States. Any U.S. system of racial classification that fails to take these sociological realities into account isn’t worth a bucket of warm spit.

Hispanics/Latinos are far more likely to identify with their Latin American countries of origin than the Hispanic/Latino ethnic classification imposed by American politicians and intellectual elites upon a variegated population for political purposes. Just as Hispanics/Latinos almost universally reject the gender-neutral “Latinx” terminology preferred by white progressives, they likely do not conform to Leftist perspectives on how they should think of themselves as an ethnic group. Many if not most aspire to join the American mainstream.

In the era of slavery and segregation, a child with “one drop of black blood” was classified by a system obsessed with racial purity as black. Now that the racial stigma has mostly disappeared, census takers have bowed to reality by letting Americans classify themselves by more than one race. And an increasing number embrace the backgrounds of both mother and father by declaring themselves to be multiracial.

As Lombard writes, the percentage of Americans identifying as exclusively white and non-Hispanic will continue to decline. Add white Hispanics, however, and the picture changes. And add multiracial Americans with one white parent, and the conventional narrative becomes meaningless.

How do we characterize the change in the white population? While white alone individuals made up 72 percent of the population, 85% of births in 2018 were to white alone, or in combination with other races, or Hispanic, and only 51% of births were to two parents who identified as white alone, non-Hispanic.

Here’s a way to bring that home to Virginia. This data from the Virginia Department of Education classifies K-12 students by race and ethnicity, born far more recently on average than the population as a whole. Compare it to the table above.

Once upon a time, Americans of northwestern European stock saw themselves as white but looked askance at Italians, Greeks, Lebanese and others of Mediterranean origin with slightly darker skin. Today distinctions between those groups are largely meaningless. Indeed, we are experiencing a steady widening of the circle as more and more groups integrate into the American mainstream. Being “white” doesn’t mean what it used to.

This trend drives Leftists absolutely bonkers, of course, because their power rests upon race-based victimhood and grievance. For the Left, it is imperative to perpetuate race and ethnicity as primary identities. Thus, leftists label mainstream American culture as “white,” hence illegitimate for other races to emulate, and members of the white intelligentsia lecture African-Americans on what it takes to be authentically black — conservative political views explicitly forbidden.

While racial/ethnic identity is as important as ever in the world of politics, in the everyday world in which people live, work, marry and have children, it is becoming less important. Americans increasingly see each other as individuals, not members of a race. And that is a beautiful thing.

This entry was posted in Demographics, Race and race relations, Uncategorized and tagged James A. Bacon. Bookmark the permalink.