The New Racism at a Danville Vaccination Clinic 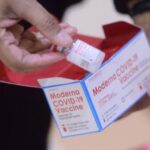 Remember that COVID-vaccination clinic in Danville where so few locals were getting shots that people, mostly students, were driving in from out of town to avoid the long waits elsewhere? Concerned about the “equity” implications of all those white people getting vaccinated while blacks and Hispanics were not, the Northam administration restricted access for walk-ins. Only people properly scheduled through the state registration system would be allowed.

So, how’s that working out?

Danville’s state-run vaccination clinic has the capacity to administer up to 3,000 vaccinations per day. According to the Danville Register & Bee in an article published Saturday, it had averaged only 184 daily shots over the four previous days.

Well, that’s one way to ensure “equity” in vaccinations — prevent too many white people from getting them.

Steve Haner highlighted the insanity of this approach back on March 26, and the latest statistics are just icing on the cake. We can calculate that the clinic gave only 736 shots over those four days when it could have given about 12,000. So, for the sake of “equity,” roughly 11,000 people who could have been partially or fully immunized from COVID-19 were not.

As the Richmond Times-Dispatch article cited by Haner told the story, the Danville vaccination center was set up for the express purpose of serving rural black and Hispanic populations in Danville and Pittsylvania County. The region had been targeted by a Virginia Department of Emergency Management equity analysis that identified cities with high COVID-19 rates. Preference was given to locals who scheduled their shots through the state registration process. The mostly white college students flocking in from other cities did not displace anyone. They just weren’t the demographic Team Northam had in mind.

The Danville clinic is not an outlier. Northam’s vaccination czar Danny Avula has said explicitly that the administration has set aside vaccination slots for African-Americans.

If Team Northam wants to rectify “inequities” in dispensing of the vaccine, it needs to do a better job of reaching out to minority communities by addressing the apprehensions that are keeping people away. As it stands now, Team Northam’s idea of “equity” looks like reverse racism: better to have no one getting shots than the “wrong” people getting shots.

This entry was posted in Public safety & health, Race and race relations and tagged COVID-19, James A. Bacon. Bookmark the permalink.