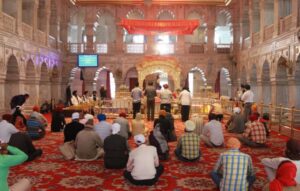 Diversity may be our greatest strength, as we commonly hear, but it also creates problems that need to be worked out. A case in point is the public school calendar, which was set when the United States was an overwhelmingly Christian nation. When 99% of the population was Christian, it was simple common sense to organize school breaks around the observance of Christmas and Easter. Today, with immigrants from around the world, public schools are filled with Jews, Muslims, Buddhists, Hindus, and Sikhs whose holy days are not accommodated by school schedules.

The Fairfax County School Board made a stab at compromise, directing teachers to continue holding classes on a list of 15 days marked by non-Christian religious and cultural observances, but to postpone tests and social and athletic events on those days. The board also voted to let teachers take two holy days off, but only if they made up the 16 hours missed, according to an opinion piece by Joyce Winslow published in The Washington Post. Winslow, who is Jewish, was not happy. She writes:

In effect, the board created a two-tier education system by establishing a “separate but equal” policy for minority faiths that is not equal and will continue to add to children’s “feelings of inferiority.” The Supreme Court found this unconstitutional for race in Brown v. Board of Education of Topeka in 1954. The same should apply for religion.

There’s a lot of off-putting language in Winslow’s piece. For context, she notes Anti-Defamation League claims that white-supremacist propaganda doubled between 2019 and 2020 — as if scheduling winter and spring breaks around Christmas and Easter was akin to expressions of hatred for Jews. She also makes this statement: “To create a scattershot list of “15 religious and cultural observance days,” treat them differently from Christian holy days and term that ‘equality’ is as ridiculous as cluster-bombing a foreign meadow and calling the ensuing quiet ‘peace.’” That’s rhetorical overkill.

But Winslow’s larger point stands. America has become a “world nation,” a melting pot not just of Europeans, all of whom shared a Christian heritage (though divided between Protestant, Catholic and Orthodox), but of peoples from every corner of the world. When the population of non-Christian people reaches a certain point, school districts should make reasonable accommodations.

What’s the trigger point for enacting changes? That’s a tricky question certain to engender a different debate. Is one Sikh sufficient to compel a school to alter its calendar? No. A dozen Sikh families? Five percent of the study body? Hard to say. But at some point accommodations should be made.

The Fairfax County School Board, whose policies I often disagree with, has devised a reasonable halfway step — allowing teachers and students excused absences, and not scheduling important tests and events on days they will be gone. Creating more options is a good thing, not a bad thing.

For some, like Winslow, that’s not good enough. A lot of Christians won’t like the compromise either. And I’ll admit, amidst the raging culture wars in which traditional Christian values are under relentless assault, I can understand the temptation to yield no ground. When commentators like Winslow lump traditional school calendars in with white supremacists, segregationists and bigotry, I can sympathize with the temptation to respond with a hearty, “Bite me!”