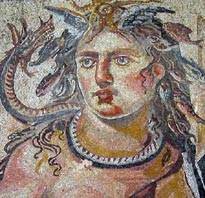 Meet Tethys. Not the real Tethys, the mythical Greek Titan of the sea, but the U.S. Department of Energy’s center for reporting research on the environmental impact of energy technology on sea life, including whales. This is the science side of DOE (where I used to work), not the Ocean Energy development side. END_OF_DOCUMENT_TOKEN_TO_BE_REPLACED

In my previous article I raised this question: what is the potential adverse impact of Virginia’s massive offshore wind project on the severely endangered North Atlantic Right Whales? Answering this basic question should be a central feature of the upcoming Environmental Impact Analysis (EIA) required for the wind project by the National Environmental Protection Act (NEPA).

The 70-ton North Atlantic Right Whales migrate through Virginia’s offshore waters twice a year, making the impact of these proposed huge offshore wind projects a serious question. I have been doing some digging, and the results are puzzling. We may have some secret science going on.

To begin with, while there has been a lot of research on these whales, it has almost all been done in their northern and southern habitat zones. There is almost nothing on migration, even though migration is especially dangerous for any critters that do it, whales included.

So, it is not clear that we even have a clear picture of how they migrate through the waters where these massive wind projects are proposed. A lot of the risk depends on how they migrate, and we seem not to know much about that.

I say we “seem not to know” because someone in the federal government may actually know more than they are prepared to divulge. This is where it gets puzzling, as follows. END_OF_DOCUMENT_TOKEN_TO_BE_REPLACED 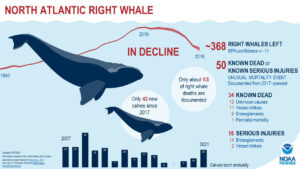 The North Atlantic Right Whale is reported to be the world’s most endangered large whale, with an estimated population of just a few hundred critters. They winter off of Florida and Georgia, but summer off New England.  They migrate through the coastal waters off of Virginia twice a year, including that year’s baby whales. They can grow to over 50 feet in length and weigh more than 70 tons. Protecting them is a major challenge.  END_OF_DOCUMENT_TOKEN_TO_BE_REPLACED 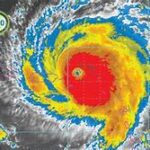 Now I have found some research that actually quantifies the threat and it is very real. It looks like wind generators will have to be redesigned specifically to withstand hurricanes. In fact, that work is underway. In the meantime we should not be building conventional offshore wind towers. END_OF_DOCUMENT_TOKEN_TO_BE_REPLACED

The “Honesty Gap” Is Dishonest 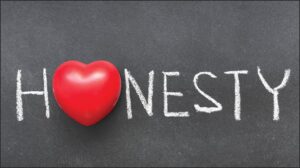 Loyal Baconeers know what the so-called “Honesty Gap” is, as we have been discussing it at length. It is heavily featured in a recent report from the Virginia Department of Education. The gap itself is the big difference between the numerical thresholds of “proficiency” used by Virginia versus the National Assessment of Educational Progress (NAEP) for certain test regimes. NAEP’s threshold is much higher than Virginia’s (and most other States).

So, where does “honesty” come in? This is where the story gets interesting, and in my view unpleasant. It turns out that “honesty gap” is hyperbolic rhetoric, spawned by an advocacy group.

The Honesty Gap ( HonestyGap.org) is a project of the Collaborative for Student Success, which is funded by a number of prominent left-wing foundations. The project home page immediately hits you with this grandiose pronouncement:

Parents deserve the truth. Historically, states have exaggerated the percent of students who are proficient – as demonstrated by the huge gaps that have existed between state NAEP scores and what states report as their proficiency rate.