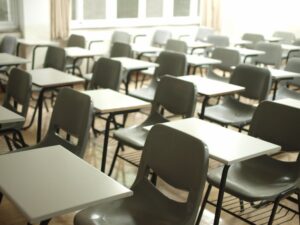 That number is likely higher today, as burned-out teachers quit their jobs in the middle of the school year in unprecedented numbers.

Despite hiring 700 to 900 teachers per year on average, Prince William County has 453 vacant positions. Richmond City Public Schools lists 90 open teacher vacancies. Fairfax County Public Schools has about 200 vacancies, although because it is so large, the county is only 1% shy of being fully staffed.

Schools are filling open positions by hiring teachers with provisional licenses, which means they have not yet completed teacher preparation programs. “Recruiting pools of people and making it easier for them to enter doesn’t actually solve the crisis. I equate it to filling a leaky bucket,” Adria Hoffman, president of the Virginia Association of Colleges and Teacher Educators, tells Capital News Service.

Hoffman argues that schools need to provide better working conditions, pay raises, and infrastructure improvements to retain teachers. Infrastructure improvements? Yes, updated ventilation systems or windows that open. Poor air quality can hurt the immunocompromised. “Even losing 1, 2 or 3% of your workforce due to lack of safe and clean air quality makes an impact,” Hoffman says.

I suspect inadequate air conditioning is the least of most schools’ problems.

WWBT cites a 2018 survey in which teachers listed pay, workload, and lack of support from administrators, as reasons for leaving the profession. A pay raise would create an incentive to continue working, but 23% said that no level of pay increase would encourage them to stay.

Since then, the COVID pandemic and administrative response to it have aggravated teacher stress levels. Not only are some teachers worried about exposure to the virus, many struggled to switch back and forth between in-person and remote learning. With all schools back to in-person this year, they’re dealing with an increased level of behavioral issues, which one teacher attributes to “internalized trauma from the pandemic,” and the challenge of catching up students who lost ground last year.

State legislators have proposed a 4% salary increase plus a 1% bonus in each of the next two years of the new biennial budget. As generous as that might have been by previous standards, it lags the 8.5% increase in the cost of living in the past year.

Bacon’s bottom line: I have yet to see news stories acknowledge in any but the vaguest of terms how teachers are demoralized by ever-increasing demands for paperwork, deteriorating classroom discipline, and the time chewed up in Diversity, Equity & Inclusion training. Virginia’s public schools are in trouble, none more so than Title I schools with large enrollments of low-income minority students, where discipline problems are the worst and Standards of Learning pass rates have fallen the furthest.

The increasing teacher vacancies are more than a canary in the coal mine of an impending explosion. In many respects, they are the explosion. You can’t teach without teachers.

Meanwhile, as conditions worsen, public schools in Virginia are facing a crisis of legitimacy. Even as left-wing school boards demand more tax dollars to feed floundering systems, they aggressively push a social justice agenda that is hostile to the values of many parents. There seems to be no room for compromise. When parents complain about books with offensive sexual and even pornographic content, they are ridiculed as luddites and book burners. When they complain about Critical Race Theory infusing teacher training, curricula and even some classroom teaching, they are denounced as racists and homophobes. No wonder so many families are resorting to homeschooling. No wonder school board meetings are packed every month with protesters.

This entry was posted in Education - Early Childhood, Government workers and pensions and tagged James A. Bacon. Bookmark the permalink.