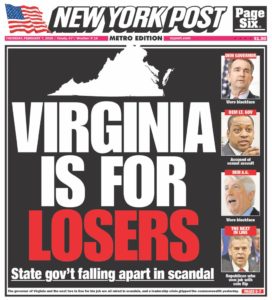 State of affairs / affairs of state.  Multiple scandals have rocked Virginia’s state government this week.  All three of our state’s top officials stand accused of substantial wrongdoing.  Governor Ralph Northam and Attorney General Mark Herring have admitted to dressing in blackface during their college / medical school days. Lieutenant Governor Justin Fairfax is being accused of sexual assault.  The stories have become national news – read the New York Post article here. Given this chaos one wonders how the good people at Amazon feel about their decision to put one-half of their new headquarters in The Commonwealth of Virginia. I’m guessing we’ll hear more about that in the near future. In the meantime, Virginians need to ask two key questions – how did we get here and what can we do about it.

The ghost of Harry Byrd, Sr. Harry Byrd, Sr was a one-time governor of Virginia and long time U.S. Senator from Virginia. During his long tenure as an elected official Byrd manipulated Virginia politics to create the rural-centric governance structure known as either “The Byrd Machine” or simply “The Organization.” The Byrd Machine was based on control of the state through control of those “allowed” to vote and to run for office. He ensured that five local officials – sheriff, Commonwealth attorney, clerk of the court, county treasurer and commissioner of revenue, were Byrd Machine loyalists. Byrd would consult with these officials before endorsing any candidate for statewide office and candidates needed Byrd’s endorsement to win. One-person-one-vote has long been nothing more than a theory in Virginia.

A Byrd’s eye view of racism in Virginia. Harry F Byrd, Sr was an ardent racist. He endorsed and signed the “Southern Manifesto.”  This 1956 screed was drafted to counter the U.S. Supreme Court decision in Brown vs the Board of Education. It was signed by 101 congressmen, 99 Democrats and 2 Republicans.  In what would be a harbinger of today’s Virginia the two Republicans were both from Virginia. Institutional racism was (is?) a bipartisan matter in Virginia. Sadly for Virginia, Byrd was more than just an immoral philosopher. He followed up the “Southern Manifesto” by helping to draft the Stanley Plan, a series of laws that implemented “massive resistance” in Virginia. This was done to help make statewide segregation the law of the land in Virginia. Even Virginia localities which tried to integrate their schools were thwarted by the Byrd Machine. Arlington County petitioned to elect its school board and was granted that “right.”. Once the elected school board decided to integrate Arlington’s public schools it was dismantled by the Byrd Machine. The new school board was appointed by Byrd Machine lackeys and went back to segregated schools. Abusing Virginia’s strict implementation of Dillon’s Rule for racist purposes has a long history in the Commonwealth.

Gone but not forgotten. Harry Byrd, Sr died on Oct 20, 1966. However, the echoes of his demented legacy continue to reverberate throughout Virginia. Stunningly, a large statue of the architect of “massive resistance” sits on the capitol lawn in Richmond greeting our legislators as they file past deciding how to best govern Virginia. Route 7 in Northern Virginia is renamed the Harry F. Byrd, Sr. Memorial Highway as it rolls through Fairfax County on its way west.  Obviously our present political class is quite proud of Harry F Byrd, Sr, his anti-Democratic Byrd Machine and his legacy of active racism. Virginia’s 1971 Constitution (our present constitution) contains many elements of the Byrd Machine’s penchant for sabotaging Democracy in Virginia but that’s a topic for another post. 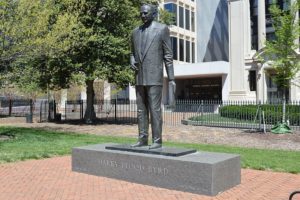 Can you make out our current legislators’ lip prints on his butt?

Throw the bums out. It’s time to rid Virginia of the lingering specter of the Byrd Machine. This can only happen by eviscerating the General Assembly and discarding the many politician-for-life state legislators with long running ties to Virginia’s anti-Democratic and racist past. While these are mostly Republicans the fact that Herring and Northam are both Democrats should be clear evidence that the Democratic side of the aisle is ripe for house cleaning too.

Let this November be remembered as the time when Virginians finally threw the bums out!