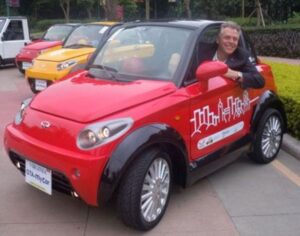 This is the fourth in a series of posts about Terry McAuliffe and GreenTech Automotive.

The Chinese citizens who lost $500,000 each from investing in GreenTech Automotive were not happy with their setback. While they had ponied up their money as part of a scheme to get a U.S. visa under the EB-5 program, many thought they would get their money back. When they didn’t, they felt cheated. Twenty-seven of them banded together and filed suit against Xiaolin “Charles” Wang, Anthony Rodham and Terry McAuliffe, the principals of GreenTech and its allied fund-raising arm Gulf Coast Management.

The outcome of the case, Xia Bi vs. McAuliffe, hinged on matters of law. Boasting, exaggeration and hype regarding future events, referred to as “puffery,” which the defendants indisputably engaged in, do not constitute fraud. Although some of the Chinese plaintiffs’ allegations did describe misstatements of fact, said federal appeals court judge J. Harvie Wilkinson III in a 2009 ruling, they failed to show that they had based their investment decisions upon those misstatements. Accordingly, he upheld a lower court order to dismiss the case.

Nevertheless, Xia Bi vs. McAuliffe provides insight into how the GreenTech fund-raising operation worked. It is abundantly clear why the Chinese investors felt cheated, even if they could not win their case in court. As Wilkinson wrote, “There are no laurels in this case, no accolades to be bestowed.”

GreenTech’s fund-raising arm, Gulf Coast Funds Management LLC, was connected by ownership and management ties to GreenTech. Rodham, Hillary Rodham Clinton’s brother, was the CEO. To raise capital, Gulf Coast sold $500,000 shares of preferred stock in Gulf Coast to Chinese investors, then turned around and loaned the proceeds to GreenTech. Technically speaking, the investors lost their money when GreenTech defaulted on repaying its loan to Gulf Coast.

Gulf Capital/GreenTech management saw limitless fund-raising potential from foreign investors. Gary Tang, a senior executive at GreenTech, spelled it out in a 2009 email to the Virginia Economic Development Partnership (VEDP) team working on a possible business expansion to Virginia. “Based on market research, approximately 20,000 Chinese migrate abroad through investment immigration at $500,000 up [to] $1,000,000 each. If we obtain a fraction of that market alone, the funding will be substantial.” The company, he revealed, was planning to open EB-5 funding platforms in Eastern Europe, the Middle East, and Southeast Asia.

GreenTech printed its offering memorandums in English but never translated them into Chinese. The Chinese investors, who were unacquainted with U.S. securities law, relied primarily upon verbal pitches made to them by Rodham, McAuliffe and their business associates.

Xia Bi vs. McAuliffe detailed a series of alleged false statements made during the fund-raising efforts.

The lawsuit also claimed that McAuliffe made four misstatements:

The plaintiffs said they relied on statements in newsletters, statements on GreenTech’s websites and social media, and statements made by McAuliffe and Rodham during roadshows, in media interviews, and in written materials.

The problem for McAuliffe, Rodham and Wang, the judge wrote, is that their alleged misstatements went beyond mere projections or puffery.

Rodham, for example, said the EB-5 funds accounted for only 7.8% of GreenTech’s capital. This statement was not an expression of optimism or speculation as to who might invest in the future; it was an assertion about what funds had been raised in the past. McAuliffe’s alleged misstatements were even more aggressive. GreenTech either had “sold 11,000 cars,” or it had not; it had “a thousand employees,” or not; and it had mass-produced electric cars, or not. Those statements were plainly not forward looking.

Even McAuliffe’s alleged statement that the first year of vehicle production would be sold to the country of Denmark, which at first blush describes a future event, fails closer inspection. Read in the light most favorable to the plaintiffs, this is no simple statement of opinion or future intent; it claims that a named buyer had agreed to purchase specific vehicles at a particular time.

The misstatements were not trivial, Wilkinson said. “These are just the sort of misstatements targeted by statutory and common law fraud causes of action. … Far from building investor confidence, misstatements like these alleged in this case undermine the public trust. We decline to whitewash the alleged misstatements here.”

The plaintiffs fell short, however, in proving their “justifiable reliance” upon those representations. It was one thing to say that McAuliffe and Rodham made misstatements, it was another to show that individual Chinese investors had based their decision to hand over $500,000 upon those misstatements. The  lawsuit provided no evidence that the plaintiffs acted upon the misstatements.

Moreover, the judge opined, the offering memorandums were clear that GreenTech was a risky startup, stating explicitly that “an investment in the partnership is speculative and involves a significant degree or risk.” While everyone occasionally skips over the fine print in day-to-day endeavors, he wrote, “it is fair to expect some minimal level of due diligence before making this large an investment in a company whose prospects were chancy and where sizeable returns were anything but guaranteed.”

Wilkinson made his ruling based upon the evidence presented to him. However, there is evidence that GreenTech representatives verbally assured the Chinese investors that after five years GreenTech would, if requested, repurchase their stock for $500,000. Alternatively, investors would be allowed to convert their investment into common shares having an estimated fair market value of $600,000.

In August 2013 media reports surfaced that that Gulf Coast and GreenTech were under investigation by the Securities and Exchange Commission (SEC) over their conduct in soliciting foreign investors. The investigation, said the Washington Post, was focused, at least in part, allegations that the company “guarantees returns” to the investors.

By promising Chinese citizens that they could not lose, Gulf Coast/GreenTech created a problem with U.S. immigration authorities. The existence of a redemption agreement violated the requirement that the capital of EB-5 program participants be “at risk.” A letter from U.S. Senator Charles E. Grassley to Alejandro Mayorkas, director of U.S. Citizenship and Immigration Services, cited a draft opinion of the Administrative Appeals Office: “For the alien’s money to be truly at risk, the alien cannot invest into a commercial enterprise knowing that he has a willing buyer in a certain number of years, nor can he be assured that he will receive a certain price.”

The incident also became embroiled in charges that Mayorkas had engaged in favoritism by intervening to expedite the processing of visa applications for Gulf Coast’s EB-5 investors in response to special pleading by McAuliffe and Rodham.

The issue caused a kerfluffle in the media, then disappeared from view.

McAuliffe has not been found liable civilly liable or criminally guilty of any wrong-doing. But many of his actions did not pass an ethics test. Not only did he raise the bar for puffery and hype, he made numerous misstatements and engaged in what appears to be deliberate deception to keep the company afloat and the Chinese money rolling in.

Bacon’s Rebellion will illuminate that track record in the next installment of this series.

This entry was posted in Business and Economy, Entrepreneurialism, Scandals, Uncategorized and tagged Carol J. Bova, Greentech, James A. Bacon. Bookmark the permalink.