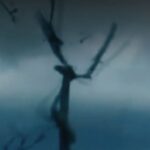 Snippet from UVA video showing how winds can destroy a large wind turbine.

Now comes applicant Dominion Energy Virginia, petitioning the Virginia State Corporation Commission to reverse its recent decision to impose actual financial risk on the company and its stockholders. If a hurricane blows down its planned offshore wind farm in a few years, the related costs should be imposed 100% on its captive ratepayers, Dominion demands.

Imagine that: expecting a monopoly with a guaranteed right to earn in excess of 10% profit on a $10 billion project forced to face actual risk. What is the world coming to?

The claim that this was a safe and reliable investment was Dominion’s opening bet and smelled like a bluff to most of us. The SCC called the bluff, and now Dominion wants to fold. What does that tell us about its hand?

The regular news media has covered this latest development in the Coastal Virginia Offshore Wind saga, so some additional thoughts. When the SCC imposed a performance standard with some teeth, I wrote that a motion to reconsider that part of the approval was possible. Here is the petition. If the motion is granted, more SCC debate is held. If denied, the utility then can appeal to the Virginia Supreme Court, which is still a likely outcome.

Here is the one thing all must remember, something stressed only in columns on this topic for Bacon’s Rebellion and the Thomas Jefferson Institute. Huge swaths of the case record are secret.  Sometimes it is a few redacted paragraphs; sometimes entire documents. Much of the information withheld from the public relates to the various risks that could increase the costs of the project or cause it to fail miserably.

Having read them, they endorsed a significant performance standard with financial penalties. In its final order, the SCC noted the multiple risks, although it did not specifically cite any of the secret reports or testimony. What is in those secret documents? Can we see them now? Did they motivate the decision to adopt the performance standard?

Recent unrelated developments have many Americans on edge again over government secrecy. Secrecy is usually bad policy. In this case, it is Dominion itself which can open it all up. It requested the secrecy.

If the case moves up to the Supreme Court, the appeal will be based on the allegations in this petition, and the various hidden facts and expert opinions in those secret documents probably will not even be considered. The meanings of various statutes will be the only debate.

One fact that is on the record is that no other utility on the East Coast is proposing to build and own such a project directly, imposing all the risk on its customers. The other projects in the pipeline are all being built by third parties who then sign a long-term contract to sell the power or the renewable energy credits. If the projects don’t produce power, the risk shifts at least in part to those developers. Dominion refused that option out of greed.

The lower the energy output, the higher the cost to consumers per unit of energy. Zero output from a $10 billion project ($21 billion with profit and financing costs) is quite expensive.

In the discussion of the original opinion, I noted that some variation below the 42% figure probably would not have financial consequences for the company. And in this new brief, Dominion again argues the project is financially beneficial with as low as 38% capacity factor. (That would still, however, increase the cost per unit of energy.) That confirms my observation.

No, a steady output that just fails to average out to 42% over each three-year period is not what scares the utility. The risk it refuses to take on, to impose on its shareholders, is the risk of major failure, including a catastrophic failure. That risk, which was evident before the first piece of legislation mandating this was ever introduced in Richmond, should have kept Virginia totally off this road in the first place.

I’m glad Dominion admits the risk is that high. That is how to interpret this move. Ending this mistake now is a viable option.