A Chance for Petersburg 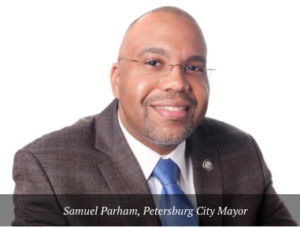 The Youngkin administration is doing an unalloyed good thing the exact right way. In partnership with two Democrats.

The Governor, in an extraordinary joint presentation with his cabinet secretaries and Democratic Mayor Samuel Parham, laid out a plan for broad state help to Petersburg.

Standing on the stage with Democratic State Senator Joe Morrissey.

Governor Youngkin is the first to step down here and say that he is going to put all of his resources in a city to move the dial to create prosperity here in the city of Petersburg. Democrats and Republicans working together — that’s what makes Virginia special.

The problems are broad and deep.

But the Governor decided very early in his administration to take on the job of trying to help.

I know this because I proposed on May 9 a special effort to help Petersburg’s worst-in-the-state public health issues, and was told by a very senior official that the direction from the Governor was already in the inboxes of the cabinet secretaries.

But it started even earlier.

Youngkin and Parham said the seeds of the effort go back to a meeting in February in which state and local officials discussed the city’s problems with violence.

Miyares said he has asked two federal prosecutors assigned to the region to focus on violent crime in Richmond and Petersburg.

Since April, Virginia State Police have committed additional resources to Petersburg, which city Police Chief Travis C. Christian credited with leading to a reduction of violent crime. Christian said Public Safety Secretary Robert Mosier calls him at least once a week “to make sure we’re just doing okay here in the city of Petersburg.”

The Governor and the Attorney General are helping Petersburg the only way that will work: with Petersburg officials and faith, civic, and education leaders in the lead and the state assisting.

The Governor’s presence in Petersburg was not a photo op.

It lasted two hours with presentations by cabinet officials on 42 different proposals for how the state can help. Those plans had not just been thrown over the fence. The foundation had been laid.

The cabinet secretaries introduced stakeholders that would be working as partners, including the YMCA, church groups and city officials.

There was some snark and ankle-biting reported in The Washington Post article. Their readers demand it.

There will be plenty of time to criticize if this initiative fails to produce results, but I think we can all cheer the well-organized and coordinated state attempt to help Petersburg help itself.

It is bipartisan.  We can all hope it works.