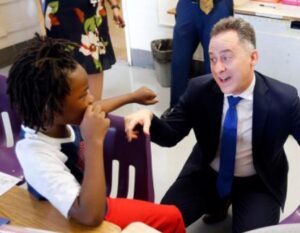 The downside of the COVID-19 school lockdown has become fully apparent to Richmond Public School officials. Richmond schools are experiencing an “alarming surge” in mental health issues — depression, self-harm, and suicidal ideation — among the district’s 21,000 students in depression, reports the Richmond Times-Dispatch.

The impact of social isolation, fear of the virus, and the deaths of loved ones is magnified, school officials say, among students who have already experienced extensive childhood trauma. “Experts” fear that an underfunded mental health system is not equipped to handle the situation.

As Robert Bolling, CEO of ChildSavers put it, the pandemic has added a new layer of trauma where trauma was already the most severe.

“We are dealing with children who had, by the time they turned 9 years old, experienced significant traumatic events in their lives” such as poverty, neglect, abuse, sexual assault or witnessing violence, Bolling said. “Toxic trauma happens when a kid experiences that four times in their lives. Our children average six.”

In poor, crime-ridden neighborhoods, it appears that schools are a “safe space” for many children. Locking down the schools leaves them without a refuge. Closing that refuge is far more detrimental to poor kids than to students from middle-class families.

The solution? If you guessed “more money,” you hit the jackpot. Yes, indeed, the RTD article quotes “experts” as saying that as the need for mental health services intensifies, more money is needed to fund expanded children’s mental health programs.

But even more money for mental health is not sufficient, says Bolling, who calls for loan-forgiveness programs for medical professionals working in under-resourced communities, recruiting more people of color into the health care industry, financing therapeutic work, and widening the panel of clinicians credentialed under Medicaid so underserved communities can access more mental health services.

In other words, Richmond during the COVID-19 needs all the same things that “experts” were demanding before the COVID-19 epidemic.

If the school lockdown was magnifying social trauma, it would seem logical that reopening schools would diminish the trauma. But politically that is not possible.

As the RTD reported five days ago, Richmond Public Schools surveyed Richmond families on whether to reopen the schools next semester. Of the 5,803 survey responses, 3,595 said they would prefer RPS remain completely virtual for the next semester. The percentages were 80% for teachers and 63% for families. That sounds like an impressive majority.

But is is? Assuming that two to three thousand teachers and staff plus the families of 21,000 students were polled, the response rate was in the realm of 25% to 30%. That allows for considerable room for bias in the results. One can conjecture that teachers and staff would be most likely to respond to such a survey, followed by parents from educated families with the time and inclination to express their opinions. (The RTD did not report on the survey methodology. Was it an online poll? Were people required to post stamps on envelopes? Small factors can skew results.)

The RTD reporters seem deeply impressed by the fact that the student body in Richmond schools is 75% black and Latino and afflicted by systemic racism. But it does not appear to have occurred to anyone that perhaps the survey results were skewed heavily by responses from white teachers and staff, and from parents whose children are less likely to suffer from poverty-related trauma and are far less likely to see schools as a refuge from the social chaos around them. Nor has anyone imagined that possibly, just possibly, those who responded favorably to the idea of school shutdowns might well be far better prepared to accommodate virtual learning at home and see a very different risk-reward tradeoff than do poor black and Latino parents who didn’t respond to the survey.

Wouldn’t it be ironic if Superintendent Jason Kamras, who prides himself on his impeccably progressive credentials, was using the survey as justification to impose a school lockdown that suits the preferences of educated white teachers, staff, and parents over the preferences of poor black and Hispanic parents?

Progressive educators and staff, who are disproportionately white, can be counted on to look after their own interests first — more money for more programs and higher pay while prioritizing their safety from the virus over the mental health effects on students from social isolation — even as they claim to be combating systemic racism.

In the end, the poor and powerless always suffer the most.

This entry was posted in Children and families, Education (K-12), Poverty & income gap, Uncategorized and tagged COVID-19, James A. Bacon. Bookmark the permalink.