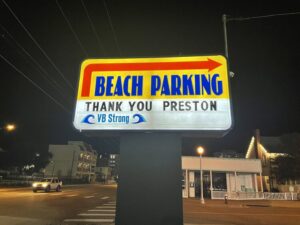 I didn’t learn about the death of Preston Midgett from the newspaper. The television. Or radio.

I learned the way many around here did: by the messages that appeared suddenly on Virginia Beach oceanfront marquees Tuesday.

The signs that for weeks had wished the Beach native and popular owner of the iconic Jungle Golf a speedy recovery, changed yesterday.

“Preston Will Be Missed,” “Thank You Preston” and “We Will Miss U Preston Midgett.”

Oh no, I thought, as I drove down Pacific Avenue yesterday afternoon. He didn’t make it.

According to Kim Midgett’s posting on CaringBridge, her husband, who was 61, died on Monday evening in Charlottesville. He was suffering from respiratory failure due to Covid-19 pneumonia.

Midgett was admitted to a Beach hospital on November 22 and transferred to UVA medical center on January 15. He spent weeks on a ventilator with no visitors.

Kim Midgett’s account of her husband’s ordeal on the non-profit social media page is harrowing. Preston experienced an array of horrific complications from the coronavirus. Despite receiving cutting-edge treatment, he was unable to survive.

In many ways, Virginia Beach with 450,000 residents really is just a small town. Or a series of small towns and neighborhoods. It seems almost everyone here either knew Preston Midgett or knew OF him.

I’d met Preston, but didn’t know him well, yet I was deeply grateful to him for giving my son his first job.

In fact, working at that exotic miniature golf course with its palm trees, banana plants, huge giraffe and other jungle animals, was a rite of passage for hundreds of local teenagers. It was there that kids learned to get to work on time. To not loaf. To smile. To be polite to tourists. And at the end of a week of working the snack bar, passing out golf clubs or moving the giant animals – I never figured out why they did that – they collected their first real paychecks.

Relying on a platoon of inexperienced kids in the hectic summer season must have been an exercise in frustration at times, but Preston Midgett endeared himself to his young workers.

I was about to call my son in Utah to give him the sad news about his former boss when I checked his Facebook page:

RIP Preston Midgett. You were one of the most generous and thoughtful people that I ever had the pleasure of working for. You are loved by so many people and you were taken from us too soon.

Thank you for being the best head ape and for making Jungle Golf so much fun for everyone.

I don’t know how he heard about the death more than 2,000 miles away, but Jungle Golf alums apparently have a network.

Those of us who love Virginia Beach will miss Preston Midgett’s devotion to our city. And the hundreds of kids who worked for him will always remember the guy they affectionately called the “Head Ape,” who gave them something special: Their first jobs.