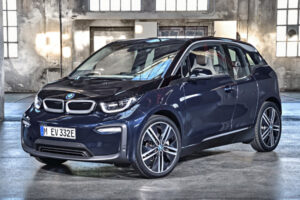 A BMW model qualified as zero emissions by the California Air Resources Board. You see more and the subsidies California provides buyers here.

Virginia’s automotive sales market is now officially controlled in Sacramento, with the likelihood that no new internal combustion engines can be sold in the Commonwealth after 2035.

The Virginia Air Pollution Control Board, acting not with discretion but on orders from the General Assembly, voted on December 2 to adopt Advanced Clean Cars Program regulations that delegate ultimate control to the California Air Resources Board. Virginia will simply follow Sacramento’s lead in dictating that an ever-increasing percentage of new car sales be certified as low emission or zero emission by the CARB.

Legally it would be similar to Virginia being forced to comply with federal regulations, except these rules will come from and be amended by California and its governor, regulators and legislature. Who in Virginia gets to vote for them? No one.

Legislation in 2021 directed the Air Pollution Control Board to adopt these rules with no deference to the regulatory processes. If you missed the usual public notices or hotly-contested public hearings, it may be because they didn’t happen. Media coverage has also been sparse.

Low-emission (think hybrid) and zero-emission (generally electric) vehicles are popular with many buyers already and will likely continue to be subsidized in various ways. Their prevalence was going to grow regardless. But it is California’s goal to ban the sale of internal combustion vehicles and perhaps even low emission hybrids by 2035, as expressed in an executive order from its governor.

If and when that happens, under this new regulation it also happens in Virginia. No local action is required. Perhaps that explains this ecstatic quote from the meeting reported by the Virginia Mercury:

“That is a very significant regulation. It will have a very positive impact on Virginia’s environment,” Mike Dowd, chief of the Virginia Department of Environmental Quality’s Air Division, told the board after the measure’s passage. “If it wasn’t against state personnel regulations, I’d be popping a bottle of champagne now.”

It was the language in the 2021 bill that overrode the Administrative Process Act’s required reviews and public input that made this rocket adoption possible. That and Section 177 of the federal Clean Air Act, which made it possible for a) California to adopt fleet emissions standards more stringent than federal rules and b) other states to piggy-back on California’s program.

The Transportation and Climate Initiative, no longer under consideration in the key states, was an effort to control the supply of motor fuels. The CARB program seeks to reduce the burning of fossil fuels by limiting the supply of internal combustion engines. A good explanation of how it works can be found here.  Several of the northeastern states that were to join TCI have already aligned with CARB before Virginia did.

The CARB program applies to the manufacturers, grants them “credits” for the sale of certified LEV and ZEV new cars, and then demands they must expend credits in order to sell uncertified cars. Over time, the number of allowed uncertified internal combustion cars is to ratchet down. If a manufacturer doesn’t need credits for gasoline cars (think Tesla), they become a commodity which can be sold for profit.

The Virginia regulation, which can found on pages 5 through 19 of the agenda for the recent meeting, exempts the sale of used cars, transfers of existing cars, emergency vehicles, military vehicles, or a car sold in Virginia for registration in a state outside the CARB’s reach. Basically it covers new cars and light trucks under 14,000 pounds.

The General Assembly also adopted a state-funded subsidy program for the purchase of electric vehicles but didn’t identify a funding source.  With the generous customer rebates on the table, Virginia’s auto dealers joined in pushing for both the subsides and the alignment with CARB. Auto Dealers Association President Don Hall put its arguments in a guest column for the Richmond Times-Dispatch during the session, and also advocated tax-funded charging infrastructure.

“If Virginia wants to emulate California, the commonwealth also must match California’s investment. A conservative estimate of California’s financial commitment to the EV market — primarily through incentives and infrastructure — roughly is $3.5 billion,” Hall wrote. He said Virginia needs to spend $720 million over five years.

Long-term operating costs may or may not offset the bite, but these hybrid and all-electric vehicles right now sell for a premium price over internal combustion vehicles. The financial benefit to auto dealers of forcing manufacturers to build more of the former and fewer of the latter is obvious.

The expected increase in electricity demand and related transmission expansions is not exactly breaking hearts among utility executives, either.

The added gasoline taxes from the abandoned Transportation and Climate Initiative might have paid for the proposed Virginia electric vehicle subsidies or that charging infrastructure. Governor Ralph Northam, who embraced the subsides and this delegation of regulatory control to California, has one more budget to propose next week. Massive federal funds for those purposes are part of the Biden Administration “Build Back Better” proposal languishing in the U.S. Senate.

Northam could use his budget to propose a way to start paying the subsidies with state or federal funding. It will actually be telling if he fails to do so. But no additional state funding is needed to begin to implement the California vehicle fleet rules. It would take new legislation now to prevent it.