A Sociological Mystery: Why Are Black Women Dropping Out of the Workforce?

Ever-alert to unexplained sociological phenomena, Bacon’s Rebellion has taken note of a just-published Brookings Institution article based on the November 2021 jobs report. Unemployment is declining for most major demographic groups — Whites, Asians and Hispanics, both men and women, and even for Black men. But the unemployment rate increased in November for Black teens and, most alarmingly in the minds of the Brookings authors, for Black women.

Don’t dismiss the possibility that we’re looking at an anomalous one-month blip that signifies nothing in the long run. But for purposes of discussion, let’s accept Brookings’ premise that there is reason to be worried. How do we explain Black women (and not Black men) dropping out of the workforce?

One obvious difference is that women tend to be children’s primary caretakers, especially in single-parent households. Brookings conjectures that child care issues might be to blame. “The nation’s childcare infrastructure is in a fragile state, after recovering 90% of its workforce relative to February 2020,” the think tank says. “Roughly 108,000 workers are still missing from this sector, where women dominate the workforce and wages skew toward the lower end of the distribution.” Along those lines, a Columbia University study tracking closures of child-care centers found that Black, Hispanic and Asian families were disproportionately affected.

But that hypothesis is contradicted by Brookings’ own data, as seen in this graph: 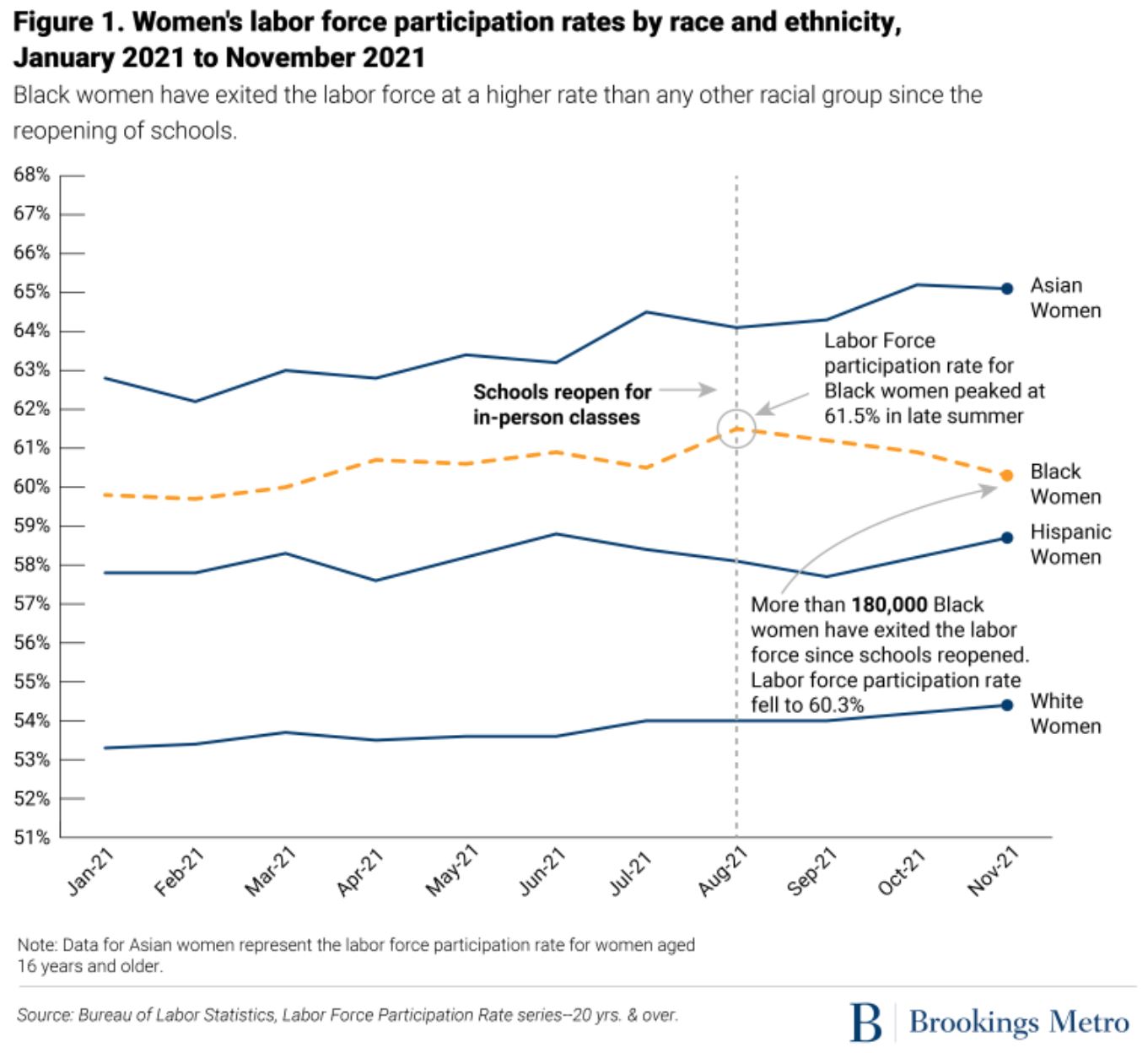 The graph specifically notes that labor force participation for Black women peaked at 61.5% in late summer before schools reopened, and that 180,000 have dropped out since then, with the percentage declining to 60.3%.

Does that make any sense to you? Schools are a substitute for child care. When parents can send their kids to school, they need less child care. By Brookings’ logic, the opening up of schools should have resulted in increased labor force participation by Black women.

We have to consider the possibility that many of the Black women dropping out of the labor force are also pulling their children out of public school. Overall system-wide numbers suggest that the biggest enrollment declines are occurring in pre-K and Kindergarten. Has funding for government-run child care suddenly dried up? Are government-run child care facilities more likely to close than other child care facilities? With Uncle Sam showering COVID-relief dollars on state and local governments, that doesn’t sound plausible. Although… you never know. It wouldn’t be the first time government money failed to reach the people it was meant to help in a timely manner.

However, it’s worth noting that Hispanic enrollment in Virginia public schools showed a 5,000-student increase from the pre-COVID era. If government-sponsored child care was drying up for poor Black children, why not poor Hispanic children, too?

Presumably, there is something unique to the situation of Black mothers. Could fear of COVID — or COVID vaccinations — be part of the explanation?

According to Virginia Department of Health data, 59% of Blacks are vaccinated, compared to 63.2% of Whites. But Blacks are significantly younger on average, and I expect their vaccination rate is higher on an age-adjusted basis. I don’t see how vaccination could be a factor.

On the other hand, VDH data show that Blacks are hospitalized for COVID and die from the virus at significantly higher rates than Whites. Are Black mothers more scared to put their young children in school? Do they feel safer at home? I don’t know.

Alternatively, could Black mothers be suddenly embracing home schooling? I haven’t seen any evidence of that, but… who knows?

Nothing seems to add up. It’s a genuine sociological mystery.

This entry was posted in Labor & workforce and tagged COVID-19, James A. Bacon. Bookmark the permalink.