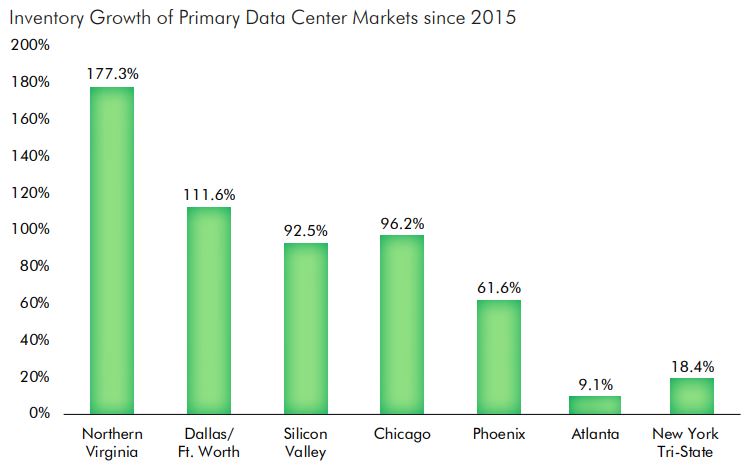 Northern Virginia accounted for 64% of wholesale data-center construction in the U.S. during the first half of 2020, as measured by megawatts of electric power consued, according to a CBRE report, “Data Centers Critical to Business Operations.” The construction trend reinforces the region’s role as the biggest, baddest center for data warehousing in the U.S. and the world.

Led by Loudoun County, the region touts 1,275 megawatts of “inventory,” about three-and-a-half times that of the No. 2 data-center cluster, Dallas/Fort Worth, and more than four times that of Silicon Valley.

The national outlook for the industry is favorable, says the report. “Companies are prioritizing IT spending as they restructure their overall budgets. While every dollar of investment is subject to scrutiny, a focus on mission-critical IT spending will be important to support remote working, transition to online platforms and serves, and to support online marketing and sales to consumers.” (Hat tip: Bill Tracy)

A CBRE interview with Charles Meyers, head of Equinx, the world’s largest network of interconnected data centers, shed light on some of the factors that go into locating data centers. Here are some lightly edited excerpts of what Meyers and Pat Lynch, CBRE managing director for Data Center Solution have to say:

Work-at-home, the digital economy, and 5G. There’s an immediate need to support a new work style for many of our clients. So it’s brought the data center and the network and the importance of that to the forefront for almost any company in the world right now. … I think the bigger driver is really the importance of digital and digital transformation as a business priority for people and also how important digital is to the lives of the consumer, and therefore all the people that are delivering those services who need to continuously upgrade and adapt their infrastructure to meet those need. … As the bandwidth increases, the uses to suck it up seem to continue to go with it. And I think 5G is going to be another example of that.

Why megawatts and not square-footage? Real estate investors might get confused by some of the terminology in data centers talking about how space is rendered via megawatt or gigawatt instead of rent and other measures of net absorption and other traditional real estate measures. …. The underlying force that drives a data center is power. So you have a data center, and how many kilowatts per cabinet you’re looking at, and those kind of things. So it does take some getting used to.

In the real estate world, it’s rent per square foot. And in the data center world, it is rent per kilowatt plus energy typically. And how do  you convert that into a price per square foot? … We have assets that back in the day and the level-three world we built to 75 watts a square foot. And people thought we were crazy. We’ll never use it. And there’s clients of ours today that are building well in excess of 300 watts per square foot. So the conversion becomes very difficult and actually meaningless because it really depends on the power that you’re utilizing.

Power hogs. We are absolutely significant users of power. … [The data-center percentage of world energy consumption] is north of seven percent now, particularly as you look at the power consumption requirements of data centers built by the major cloud hyperscale companies, for examples. But it really depends a lot on what the nature of the data center is, because there are data centers where they can be located proximate to low cost power, resources, and proximity, perhaps to sources of cooling, whether that be deep water cooling or free air cooling and very cold environments. However, not all data centers can be out in the middle of nowhere because the need for them to deliver information in a real-time fashion is still there for many uses cases. And so you see this sort of tiered architecture of data centers where large server farms with less real-time needs can be located further out, closer to power sources. But the ones that are driving where data needs to be cached or transmitted between parties in near real time are going to be closer to urban centers where fiber densities are higher and connectivity is higher.

Green power. We’ve committed to a 100 percent renewable energy to power our data centers and really advanced very significantly towards that goal, and are north of 90 percent already.

Security. There are many different levels of security. … The reality is that the amount f investment and technology we apply to the physical security problem in our own data centers is probably meaningfully higher than what they can apply now in terms of their digital security.

This entry was posted in Economic development. Bookmark the permalink.