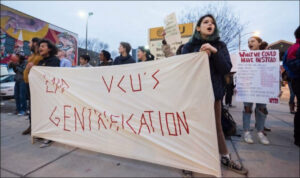 Before voting on tuition increases, board members of Virginia universities will have to listen to public input from students and families, if Governor Ralph Northam signs a bill passed by the General Assembly.

SB 1118 sponsored by Sen. Chap Petersen, D-Fairfax, with a companion bill sponsored by Del. Jason Miyares, R-Virginia Beach, would “require governing board[s] of each public institution of higher education, prior to a vote on an increase in undergraduate tuition or mandatory fees, to permit public comment on the proposed increase at a meeting of the governing board.”

The prevailing practice is for tuition proposals to work their way through financial committees and then get voted on by the full board of trustees with relatively little discussion. Board of visitors members are wined and dined by university presidents, and they rarely rock the boat. Administrators spoon-feed them information, and conflicting views are rarely heard. Unlike corporate board members who own stock in the company they govern, university board members have no financial skin in the game. Many are alumni whose main concern is enhancing the prestige of the alma mater they love.

Bob Holsworth, a rare dissenting voice on the Virginia Commonwealth University board of trustees , described board members as living in a bubble only receiving information and input from administrators, reports WCVE public radio. “What Chap Petersen’s bill does is that it reminds board members that we’re simply not there only for the purpose of advancing the university, but we’re also there to think about students and the needs of the commonwealth as well,” he said.

There are many reasons for the soaring cost of college. State financial assistance has not kept pace with inflation and enrollment growth. Administrative overhead has expanded exponentially, and highly compensated tenured faculty enjoy lighter teaching loads. Institutions have spent money on expensive upgrades to buildings and amenities in a bid to attract students. Research universities have steered funds into expensive STEM (science, technology, engineering and mathematics) disciplines that attract outside research dollars and enhance university prestige. And generous federal loan programs make it easier for students to pay their ever-escalating bills. Universities have many stakeholders in the budgeting process, but the people paying tuition constitute a weak constituency with virtually no input into the decision-making process.

Giving a voice to the voiceless would expose university board members to the human impact of their tuition hikes. Bill backers hope that hearing stories of hardship might embolden board members to push back against administrators whose primary interest is in building institutional prestige.

That would represent a positive step forward, although it would hardly be decisive. Real reform of higher education won’t come until there is a clear understanding of the driving forces behind higher attendance costs — not just tuition but student fees, room, board, and textbooks — and the Byzantine accounting systems which makes it difficult to know who is subsidizing and cross-subsidizing what within an institution.

The ultimate problem is that there is no clear bottom line for public universities. As nonprofits, they are not profit-maximizing institutions. Instead, they are prestige-maximizing institutions competing against peers in a never-ending quest for status, recognition and rankings. Containing costs is a secondary concern. But the battle against runaway tuition and fees has got to begin somewhere, and providing public input is a good place to start.