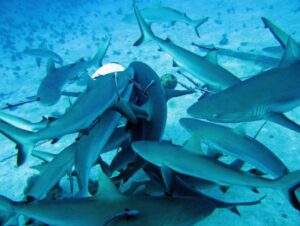 Many years ago, Virginia’s most prominent political scientist, Larry Sabato, wrote a book called “Feeding Frenzy.” If memory serves — and it’s been years since I read it — the University of Virginia professor analyzed how the media mob swam from scandal to scandal, feeding on wounded politicians like a school of sharks.

We see a version of that mindless frenzied behavior now in the media’s coverage of COVID-19.

In fact, the Delta variant is serving as chum in the water for these purveyors of panic.

Take, for instance, a story in yesterday’s New York Times that was immediately picked up by news outlets all over the country.

Get a load of the headline: “31 Children Test Positive For Coronavirus At Summer Camp.”

That’ll get your attention. These hysterics seem to be saying, See, the virus is coming for your kids. Children should be masked and at home, not living in little cabins in upstate New York doing normal kid things all summer.

I knew immediately that none of the kids at Camp Pontiac were seriously sick. Had there been a single hospitalization, THAT would have been in the headline.

A closer reading of the story shows that one camper tested positive last Saturday and so all the 550 healthy kids were tested. On Thursday, 31 children, ages 7 to 11, came up positive. Oh, and NONE were seriously ill.

Essentially, a couple of the campers have colds.

Do newspapers run front-page stories when a stomach flu hits a sleep-away camp? How about poison ivy? Athlete’s foot?

Both of my kids went to camp — not ones that cost $13,550 like a summer at Camp Pontiac, however — and my campers had broken bones, West Nile virus (that required a brief hospital stay in West Virginia by my son who begged NOT to come home), poison ivy and a host of minor maladies.

Hey, that’s what happens when kids are playing in the woods, swimming in rivers and sleeping together in tents for the summer.

Look, COVID-19 is real and so are the variants. The virus remains dangerous for the elderly, the obese and those with underlying health problems. But most of those vulnerable folks are vaccinated — 81.3% of all Virginians over 65 have received a vaccine, for instance — and healthy kids usually experience very minor symptoms.

Kids catching colds should hardly be the stuff of headlines.

Unless, of course, news outlets are deliberately trying to keep the panic going with a Delta-variant feeding frenzy.