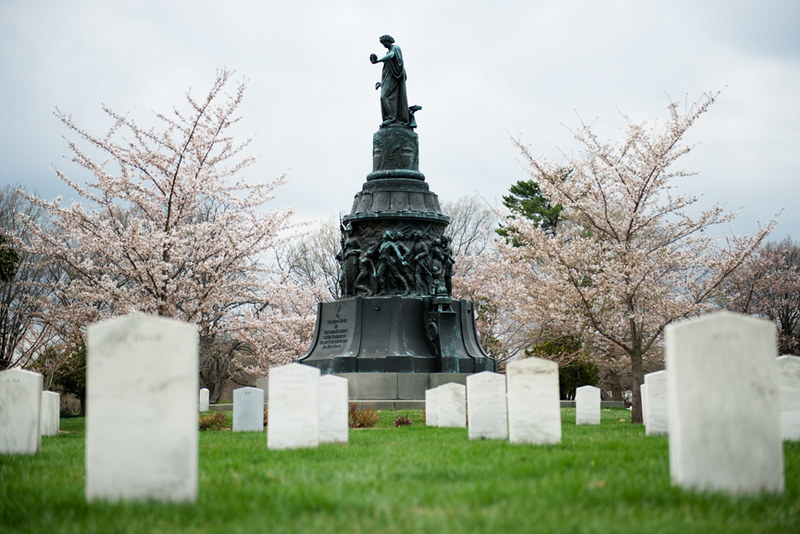 Arlington National Cemetery’s Confederate Memorial should remain intact. Although four of the first seven cotton states arguably seceded from the union over slavery, they did not cause the Civil War. They had no purpose to overthrow the federal government. After forming the seven state Confederacy in February 1861, they promptly sent commissioners to Washington to “preserve the most friendly relations” with the truncated Union. Instead of letting the cotton states depart in peace, the North’s resolve to force them back into the Union caused the war.

With half of the military-aged white men of the eventual 11-state Confederacy, the four states of Virginia, North Carolina, Tennessee, and Arkansas only joined the original seven after President Lincoln called upon them to provide volunteers to force the first seven back into the Union. In response to a telegram from Lincoln’s Secretary of War Edwin Stanton directing that Virginia provide her quota of such volunteers, Governor John Letcher replied that his state would not comply and concluded: “You have chosen to inaugurate Civil War….”

On the eve of the war, Northerners and Southerners differed on their relative loyalties to the federal and state governments. According to historians Edward Channing and Eva Moore, Northerners had

the general opinion that the Union was sovereign, and the states were part of it…. The idea that the people of the United States formed one nation had been reinforced by the coming of immigrants from abroad. These people had no conception of a ‘state’ or a sentimental attachment to a ‘state.’ They had come to America to better their condition….

By mostly settling in the North, they reinforced the Northerners’ belief that they owed their loyalty to the Union first and only secondarily to the state.

In contrast, among Southerners every “white boy and girl grew up to regard himself or herself as born into the service of his or her state.” At the 1892 dedication of the Monument to the Confederate Dead in Knoxville, one speaker echoed the point: “…the Southern soldier believed his allegiance was due, first to his state and then to the general government…. So when his state called for his service, he responded believing it to be his duty.”

Moreover, when some of America’s Founding Fathers in the North were still living, the region had a greater attachment to states’ rights. During the War of 1812, the governors of Massachusetts, Connecticut, and Rhode Island would only deploy militia to defend their respective states, despite directives from President James Madison that they be put into national service.

In 1814, New Englanders held a convention in Hartford to suggest amendments to the U.S. Constitution that would strengthen states’ rights generally as well as the region’s national influence specifically. Ironically, by advancing the calendar 47 years, the following Hartford resolution might well have been written by a seceding Southern state: “In cases of deliberate, dangerous, and palpable infractions of the Constitution, affecting the sovereignty of the state… it is not only the right, but the duty, of the state to interpose its authority for their protection.”

Thus, both Northerners and Southerners valued states’ rights as a fundamental American right when it served their purposes. Similarly, both Union and Confederate soldiers were Americans. Both merit a memorial to their reconciliation. According to historian David Blight, by 1874 — just nine years after Appomattox — “a genuine reconciliation based on mutual experience was already taking hold among soldiers.” Two years earlier Congress and President Ulysses S. Grant had authorized Confederates disfranchised by the 1868 Fourteenth Amendment to become candidates once again for House and Senate seats if they desired.

After Southerners eagerly volunteered to fight in the 1898 Spanish-American War, President William McKinley opined that America should honor the dead of both North and South. In 1906, President William Taft authorized the United Daughters of the Confederacy to raise funds for a reconciliation memorial at Arlington. The resulting sculpture, created by Virginia Military Institute graduate and Confederate veteran, Moses Ezekiel, was erected in 1914.

Notwithstanding that their homeland had been devastated by the Civil War, postbellum Confederates and their descendants more readily volunteered to fight under the old flag than did citizens from other parts of the country. Presently, 44 percent of military volunteers are from the South although the region has but 36 percent of the nation’s 18-24 age group population. This disproportional service is a long tradition.

In a 1955 Georgia Review article about postbellum Southern volunteerism, James Bonner wrote, “It would be impossible, of course, for the scholar to prove that the Southerner in battle has possessed more courage or displayed better fighting qualities than his compatriot from any other part of the country. However, from a statistical viewpoint, there is irrefutable evidence of the fact that, throughout American history, no other section of the country has sent its picked youth into battle so freely and so heedlessly as has the South.”

In World War II, Texas A&M’s military college provided more officers than did Annapolis and West Point combined. Bonner also wrote, “At the outbreak of World War II, the Southern states had the highest proportion of volunteer enlistments to induction under the Selective Service Act of any other group of states.” Nationally, the number of enlistees was half the number of draftees. “[In contrast,] Georgians volunteered at the rate of 93 percent of those drafted, while the figure for Texas was 99 percent, and for Kentucky, 123 percent…. So great was the volunteer enlistment from the South that Congressman Luther Patrick of Alabama stated that it was necessary to start selective service to [geographically] equalize the manpower burden for national defense.

Without knowledge of the approaching Spanish-American War, the dedication speaker at Knoxville’s 1892 Confederate Monument noted earlier accurately predicted, “I am persuaded that the soldier from Mississippi or Louisiana would give his life in defense of his country today as readily as one from Massachusetts or Maine.” Since the authentic combatants of the Civil War speedily and genuinely reconciled, it is shameful to overrule them a century later.

As essayist Rick Sapp notes, an analysis of the arguments for removal compared to those for retention shows that Arlington’s Confederate Memorial should remain intact. The destruction case is succinctly put by the Defense Department’s (Re)Naming Commission, “The memorial offers a nostalgic, mythologized vision of the Confederacy, including highly sanitized depictions of slavery.” To that is often added claims of Southern treason and the presumption that the Confederate soldier chiefly went to the battlefield to defend slavery and not his homeland. All are opinions.

In contrast, the case for preservation hinges upon substantial evidence from the late nineteenth and early twentieth centuries when America’s leaders and citizens — including still-living veterans on both sides — generally wanted reconciliation. To destroy the monument is to erase the history of that reconciliation and to signal that there can be no end to the Civil War.

Phil Leigh is a historian of the Civil War and the South. This column has been republished with permission from his website Civil War Chat.