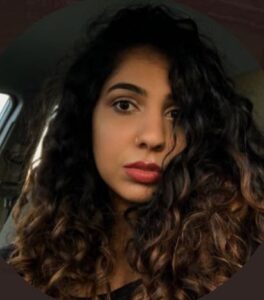 Hira Azher, the young University of Virginia woman thrust into the limelight after she posted the infamous “Fuck UVA” sign on the door of her Lawn residence, has written a column in the Cavalier Daily to defend her action, lambaste UVa President Jim Ryan, and attack the university as a white supremacist institution.

Ms. Azher comes across as self-absorbed and self-pitying, wallowing in the rhetoric of grievance and victimhood. If you think that assessment is harsh, read the column for the full text to see if I am portraying her views unfairly.

By way of background, Azher told WVIR TV that she was prompted to mount the sign on the door after suffering an injury and surgery to her ankle. She faulted the university for its lack of Americans for Disability Act accessibility on the Lawn and its response to her injury. “The solution was not to make the lawn more accessible,” she said, “the solution was to find me alternative housing for up to a month, which in itself is a problem.”

In the commentary, she writes:

<i>”As a Muslim woman of color at this University, I am constantly and painstakingly aware that this institution was not made for people like me, and everyday, the University continues to function and uphold white supremacist ideals that makes this very clear for marginalized students across the Grounds.”</i>

Pardon the interruption but Azher’s commentary already demands comment. The institution was not made for people like her? No kidding. The University of Virginia was founded in 1819 by white Christians. But it apparently escapes her notice that the university has undergone a metamorphosis since then. It seems a stretch to suggest that the institution in modern times should refashion itself into an institution “made for” people like Azher, when Muslims account for about one percent of Virginia’s population. That’s not to say that UVa shouldn’t welcome Muslim students. It should — and does. I cannot find the number of Muslim students from Virginia, but the student body includes people from Muslim-majority nations such as Bangladesh, Egypt, Indonesia, Kuwait, Malaysia, Pakistan, and Turkey. The university supports a Muslim Students Association as well as numerous associations comprised of students from Muslim-majority countries, and it has numerous Muslim faculty members.

It is undeniable that white supremacy and settler-colonialism are foundational to the University of Virginia. The University was founded by a white supremacist rapist and enslaver on stolen Monacan and Manahoac land and built by enslaved laborers. The University continues to enforce these ideals through its current policing and surveillance, exploitation of students and their labor, harm to the Charlottesville community and constant violence towards Black and Brown lives.

This is not the time or place to argue history. But Azher’s observation that the University “continues to enforce” the ideals of rape, enslavement, and theft of land is not a self-evident proposition. Violence? What violence? There have been a handful of encounters in recent years in which local law-enforcement arguably  have treated minority students with unnecessary roughness. (No one seems to care if white students are manhandled or arrested.) But the problem (if indeed it is a problem) emanates from local law enforcement, not the university. As for the exploitation of student labor, the University recently increased its minimum wage to $15 an hour.

But let us continue. Azher is personally aggrieved that the university showed “blatant disregard” for her “life, health and safety” as a Lawn resident. Apparently, the status of the Lawn and Rotunda as a World Heritage Site made it impossible to redesign and reconfigure her historic Lawn residence in such a way as to make it accessible to Azher with her injured ankle. Full accessibility, according to a document she points to in her column, includes “adding ramps to every set of stairs on the lawn, allowing students to access all portions of the lawn.” “Even now, as I recover from surgery,” she writes, “I am forced to live outside of my room because the University still refuses to make this campus safe and accessible.”

So, UVa is guilty not only of turning itself topsy turvy to remake itself into an institution “made for people like her,” but it has refused to reconfigure one of the world’s architectural masterpieces to accommodate her surgery. But that’s not all. Azher feels herself the victim of “violence.”

For the record, as I understand it, the University police officer assigned to her door was posted to protect her profane sign and her right to free speech, not to “endanger” her. Furthermore, the “white, male alumnus” she refers to was none other than alumni activist Bert Ellis, who knocked on her door and made polite inquiries about the reasoning behind her sign. He was indeed carrying a razor blade, but the purpose (never carried out) was to excise the offending “Fuck UVa” from the sign, not to intimidate her.

While Azher criticizes white privilege and portrays herself as “marginalized,” her sense of privilege knows no bounds. Over and above expecting the University to prioritize her personal needs, she showed a breathtaking arrogance in her interaction with President Ryan. When Ryan approached her shortly after the controversy flared, she writes, “I set three strict boundaries — firstly, he could not simplify and minimize this to a conversation about free speech. Secondly, he could not publicly condemn my sign. Thirdly, he must acknowledge the truth and lived realities of the people who built and were exploited by this University currently and historically.”

She’s the one setting boundaries? Back in 1975, I would have been quivering in my boots if I’d been singled out by President Edgar Shannon. My so-called “white privilege” did not empower me to treat my elders and superiors with disrespect. While whining about her powerlessness as a marginalized person of color, Azher is privileged with a sense of moral authority in the university by virtue of her minority status that white students do not enjoy.

Azher goes on to describe the University — the same University that honored her with a privileged residence on the Lawn — as “a force of exploitation and violent oppression.” Yes, indubitably, that’s what oppressors do: They elevate those they subjugate to positions of honor.

In retrospect, Azher writes, “one of my greatest mistakes at U.Va. was my decision to live on the Lawn. Although I was given visibility through a platform, it was at the cost of my own and my community’s health, stability and safety.” She concludes: “When we say ‘Fuck U.Va.,’ do not simply fight for our right to say it, but fight unapologetically against the injustices that have fueled it.”

Hira Azher and the other students living on The lawn who followed her lead and hung similar posters must have liked the University enough four years ago to apply. They respected the school enough to accept the offer to attend. They enjoyed their first three years enough to not only return for a fourth year, but also to apply to live on The Lawn. Now, they have decided to respond to this privilege by plastering profanities on their doors. …

Where did this sudden hate for the University come from? Why Now?

Where did this hate come from? That is the question every UVa alumnus should ask. The issue is much bigger than a “Fuck UVA” sign on the lawn. The issue is the toxic culture that filled Hira Azher with such bitterness and resentment.

Update: I have deleted a passage which, though entirely defensible, will distract from much more important points I’m trying to make.

Update: I’ve changed the headline from “Hira Azher” speaks to “The ‘F— UVA’ Girl speaks. No one recognizes the name Hira Azher. But everyone who has been following this issue knows who the “F— UVA” girl is.

This entry was posted in Culture wars, Race and race relations and tagged James A. Bacon, University of Virginia. Bookmark the permalink.