Hate, Hostility and Harassment at UVa 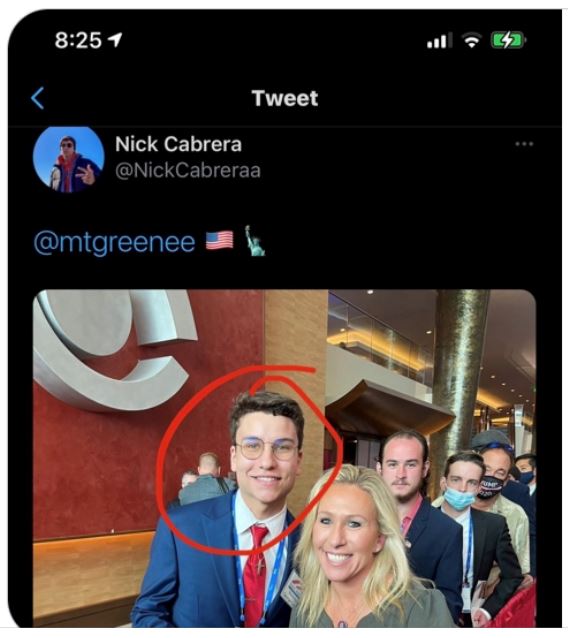 Nick Cabrera tweeted this photo of himself posing maskless with Congresswoman Marjorie Taylor Green at the Conservative Political Action Conference. COVID scolds wanted to impeach him from student council.

Last fall Nickolaus “Nick” Cabrera ran for election as a first-year representative to student council at the University of Virginia. His platform was anodyne — showing unity in confronting COVID-19, getting Class of 2024 t-shirts delivered, that sort of thing. He didn’t run on an ideological or partisan political platform, but he didn’t hide anything either. It wasn’t until he was actually elected to a spot on Student Council that people took notice. Horrors! He supported Donald Trump for president! The word went out on the social media tom-toms. Before long, he was a campus villain.

It wouldn’t be long before Cabrera received his baptism under fire as the sole conservative representative in a student council populated entirely by representatives on the blue end of the political spectrum.

UVa erupted in a furor when minority and woke-white students took umbrage at the use of language by a Commerce School professor. Student Council passed a resolution demanding implementation of a “strike” system — three strikes and you’re out — to hold professors accountable for the use of words deemed offensive. Cabrera was the only student to speak against a measure he saw as a threat to free speech and due process. His stand on principle earned him the animosity of other council members, who said in essence he had no standing as a white person to speak on the matter. (I have described that encounter in detail here.) 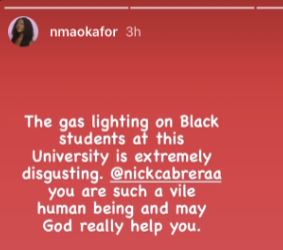 Cabrera ran into the woke buzz saw again when he voted against a resolution to condemn anti-Asian hate. He wanted to show solidarity with Asian victims of violence but objected to the part of the resolution calling for police defunding, so he abstained. In other controversies he has offended the LGBQT community for being insufficiently woke, and earned no friends when he tried to reinstitute the pledge of allegiance before council meetings. Those and other disagreements sparked tremendous social-media scorn.

As Cabrera noted in a letter to the recently appointed Committee on Free Expression and Free Inquiry, he has been subjected to steady harassment online. “The comments I get oftentimes include extremely foul language, unnecessarily sexualized content, radicalism, and especially cyber bullying,” he wrote. “My last name, of Hispanic origin, has been slandered to “c*ntbrera,” “carbonara,” “crabrera,” and more. (Cabrera’s father is Puerto Rican.)

He enraged the campus Left when he posed for a photo with controversial Georgia congresswoman Marjorie Taylor Greene at a Conservative Political Action Conference this past February. When a student made an issue of the photo, the Student Judiciary Committee embarked upon a trial that could have led to his impeachment by the Student Council. The case was ultimately “dropped” for unknown reasons, he says. 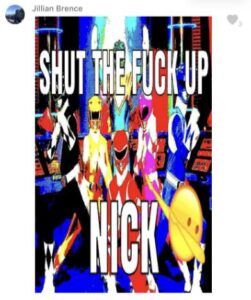 In another incident, he tells Bacon’s Rebellion, “A guy came up to me in the dining hall. ‘Are you Nick? You sure had a hell of a lot to say. If we weren’t here [in the dining hall] we’d be throwing hands.'” (Throwing hands is slang for fighting.) The same person was hanging out by the dormitory door when he returned to his room that night. Nothing happened, but it felt creepy. Says Cabrera: “Most people don’t have the audacity to say anything to your face.”

His unpopular stances have earned him plenty of notoriety. “People definitely know who I am,” he says. Some give him unfriendly stares. He shrugs them off. Dirty looks, like the foul language, comes comes with the territory.

The online harassment is harder to deal with. Cabrera has saved more than 300 screen shots of nasty social media posts. For the most part, the nastygrams come from the same 50 to 100 people tweeting over and over, but it’s unsettling when another 1,000 people “like” or retweet the messages.

“It’s honestly a lot to handle,” he told the Committee on Free Expression. “At times I have found myself depressed, and strongly considered transferring.” 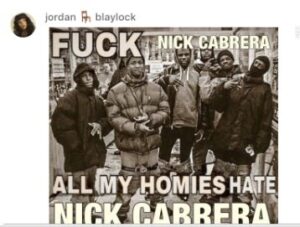 But Cabrera does get positive reinforcement. Occasionally, people reach out to thank him. He’s heard from about 50 fraternity and sorority members who thanked him for standing up for the Greek system. He appreciates the support he has received from the Young Americans for Freedom, a conservative group of which he is a member. (I described here the tribulations of Victoria Spiotto, head of UVa’s YAF chapter.)

Still, he described himself as “firmly disappointed” by his UVa experience, and especially the “lack of empathy” from President Jim Ryan and Dean of Students Allen Groves. The administration bends over backwards to defend favored minorities from harassment and other forms of business. The Office of Dean of Students even maintains a “Just Report It” system where students can report incidents of “bias,” and are promised they will be “contacted by a dean within 24 hours of your report.” No mechanism exists to report vulgarity, insults or threats to conservatives. 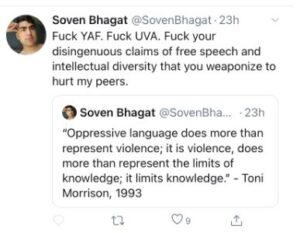 In an institution where the student body trends strongly left-of-center, Cabrera was not surprised to lose his Student Council re-election bid this spring. Unlike his first venture into student politics, he ran for re-election based on what he saw as a student council member.

“Council should be for everyone, regardless of politics race, and sexuality,” he says. “We should treat everyone equally. I also ran on the Constitution. We’re trying to model the government that our founding fathers created for us, and apply that to our student government.”

It was not a winning message. Cabrera was defeatedly decisively. But he’s not going away. He plans to attend Council meetings, keep current on student-government issues, and run again. Maybe things will turn out differently next time.

Here is the document Cabrera submitted to the Committee on Free Expression and Free Inquiry. The images embedded in this post come from this compilation of social media post he has saved on his iPhone.

This entry was posted in Culture wars, Education (K-12), Individual liberties and tagged James A. Bacon, University of Virginia. Bookmark the permalink.