Johnson & Johnson Danger: Same As Getting Struck By Lightning 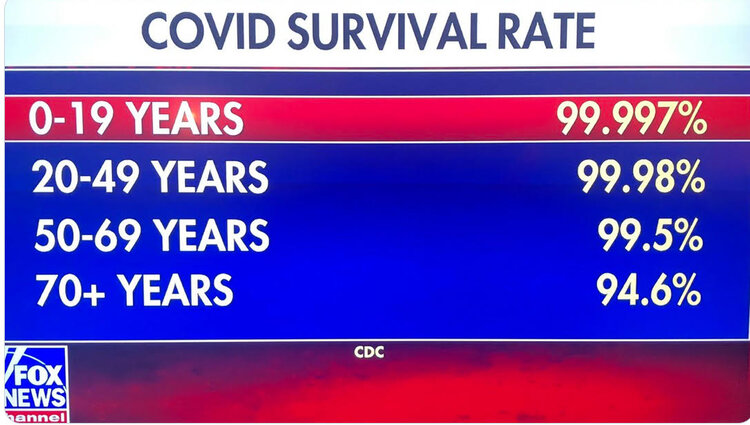 A chart rarely shown in the mainstream media because it doesn’t gin up hysteria about the virus.

Here’s a prediction: We’re going to see a drop-off in the number of people being vaccinated against COVID-19. Thanks to bungling and fear-mongering by government officials.

Currently 3.1 million Americans are getting the vaccines daily.

Analysts will try to blame and drop on the Johnson & Johnson blood-clot scare — more about that in a minute — but a bigger reason will be the relentless messages of gloom from the Prince of Darkness, Anthony Fauci.

First Fauci urged Americans to get vaccinated. Then he declared that vaccinated people should continue to wear masks, avoid crowds, they should not travel and they should stay away from indoor dining.

He “can’t predict” when life will get back to normal.

If that’s true, what’s the point in vaccinations? Either the shots work or they don’t.

Ever since “14 days to slow the spread,” health “experts” and tyrannical governors have moved the return-to-normalcy goalposts. For months we were told that once the vaccines were here the emergency orders would be lifted. Now some seem to want to keep restrictions in place until the virus is gone.

And that day will never come.

Fauci and company seem to be terrified of any risk no matter how small. Whether they know it or not, their cowardly behavior is discouraging people from taking the vaccines.

We’ve been told the vaccines are between 65% effective (for J&J) and 95% (Pfizer). That’s a phenomenal rate. Much higher than for seasonal flu shots .

(And that doesn’t mean you have a 65% to 95% protection against getting seriously sick or dying from Covid after you’ve been vaccinated. It means that whatever your risk of death or serious illness was when you were unvaccinated is now cut by 65% to 95%.)

Check the chart above to determine your own risk of death from the virus without a vaccine.

It’s not just Fauci casting doubt on the efficacy of vaccines. President Biden — fully vaccinated since the beginning of the year — engages in pandemic theater whenever he appears in public mumbling through a wad of masks. Same goes for the Vice President and the governor of Virginia. Ralph Northam not only had COVID, but was also vaccinated last month. He must be crawling with antibodies. Yet there’s the governor all masked up in public, claiming to “follow the science.”

These officials may think they’re setting an example. What they’re really doing is snatching hope away from Americans who are weary of masks and restrictions. The best way to get people vaccinated is with a promise of a quick return to normal life.

The only reason the government is able to get away with this endless negativism is because brainwashed Americans have no concept of probability.

Don’t believe me? Go to a 7-Eleven when the Mega-Millions jackpot is closing in on $1 billon. You will see people buying 10, 20 or 50 tickets, believing that they’re boosting their odds of winning. They don’t understand that when your chance of winning is 1 in 302.5 million, buying a dozen tickets doesn’t move the needle much. Yet there they stand, clutching fistfuls of losing lottery tickets.

Which brings us to the Johnson & Johnson panic. When news broke that six people out of about 6.8 million doses distributed had developed a serious blood clot disorder and that one of the victims had died, government officials panicked and “paused” distribution of the vaccine.

The news media dutifully blasted out the headlines, adding to the fear factor.

This was a stunning over-reaction to a very rare-but-serious side effect.

In reality, the chances of developing a serious blood clot from the J&J shot is about the same as getting struck by lightning: One in a million.

By halting the distribution of the J&J product, government officials whipped up doubts and hysteria about all of the vaccines.

Combine that with Fauci’s gloomy pronouncements and it’s about to get tougher than ever to convince skeptical folks to roll up their sleeves.