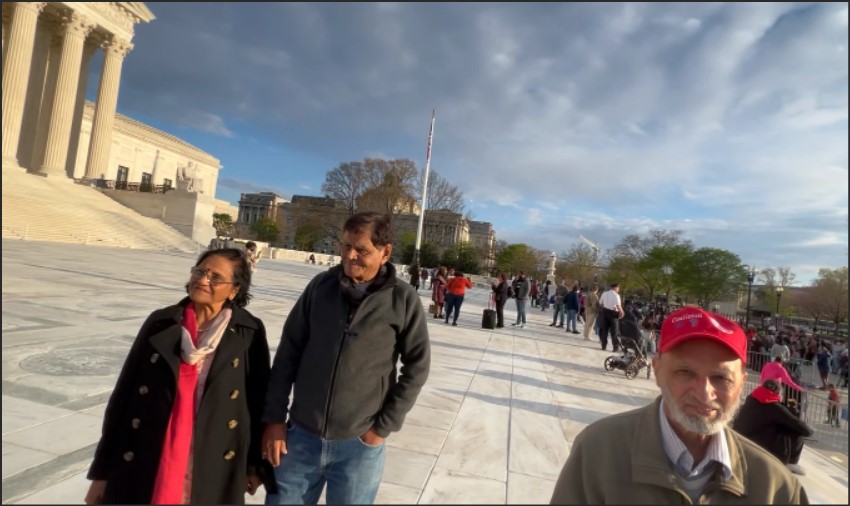 Recommendation to readers: Be sure to delve deep enough into the story to read Asra Nomani’s personal story. She describes the values to which Asian-Americans owe their academic success. — JAB

WASHINGTON, D.C. — This past Friday, Dr. Mridula Kumari, 71, walked up the stairs to the U.S. Supreme Court, and soaked in the festive atmosphere on the sidewalk off 1st Avenue S.E. A band played, as children danced and women clapped, pumping their hands in the air to the beat, one woman in New Balance sneakers carrying a bag that read, “Our Rights. Our Future. Our Power. Our Courts.”

She hoped these protections would also be extended to her granddaughter: a first-generation American and a seventh grader in Fairfax County Public Schools, across the Potomac River in the northern Virginia suburbs of the nation’s capital. As the daughter of immigrants from India, her granddaughter faces a new racism in America: an anti-Asian admissions process to schools, including Thomas Jefferson High School for Science and Technology, a school fondly known as TJ.

We ❤️ you, @PacificLegal. You are champions for the American Dream and children everywhere. https://t.co/z11ehn8qZa

As an expert attorney explained: The process we’re going through now is an emergency process—often called the “shadow docket”—designed specifically for instances like this where there’s an urgent problem and there isn’t time to wait for the normal appeal to run its course. There is no oral argument in this emergency process and very limited briefing. Normally, parties get months to file their briefs. The school board got five days in this case, their response due Wednesday at the close of business. Also, the issue is limited to just whether the stay should be vacated. No decision will be made on the merits. 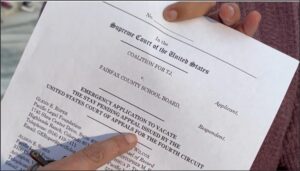 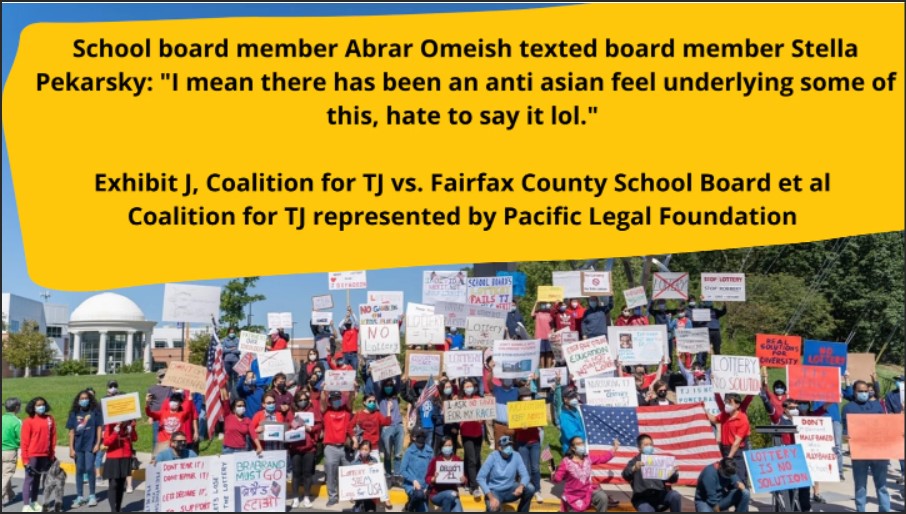 A week later, the judge denied the school system a “stay” on the judgment pending appeal, but, stubbornly, Fairfax County lawyers filed an appeal to that decision with the 4th Circuit Court of Appeals and won a stay in a split 2-1 decision. That means it can select its next freshman class for this coming fall 2022 using its illegal process. It also filed an appeal on the merits decision.

On Friday, Pacific Legal Foundation attorneys filed the emergency petition to null the stay and stop the unconstitutional admissions process.

A pioneer as a physician in her native India, Dr. Kumari trusted the United States years ago with her son, just out of undergraduate studies, to forge a future for himself and, later, his family. She had missed him deeply but surrendered her faith to America. It troubled her when she heard that school district officials had eliminated the race-blind, merit-based math and science admissions tests to the school in December 2020 and replaced the tests with a new squishy system that included “bonus points” that have nothing to do with academics and are really proxies for race.

Friday afternoon, across town, at the White House, a beaming Justice Jackson said that “our children are telling me that they see now, more than ever, that, here in America, anything is possible.”

Is “anything” truly possible when a system is allowed to continue even though a federal judge has established it as illegal, unconstitutional and anti-Asian?

Would “anything” have been possible if White Southern Democrats in the “Massive Resistance,” a political machine led by Sen. Harry Byrd in the 1950s, had been able to successfully stop integration of K-12 public schools after the landmark 1954 U.S. Supreme Court decision, Brown v. Board of Education?

And that is why U.S. Supreme Court Justice John Roberts should side with Dr. Kumari and her granddaughter. Beside her, her husband, Suresh Kumar, a retired mechanical engineer, stepped forward to say, “United States is great because it gives equal opportunity.”

He added: “That tradition should continue. Everybody — whatever it is — should get equal opportunity.”

Who can disagree with that? That is the spirit that brought a mother, Suparna Dutta, standing next to the grandparents, as a young graduate student from India to Tennessee to study.

“Immigrants like me flock to this country because they believe this nation is a nation of laws,” she said. Dutta had a son at TJ. 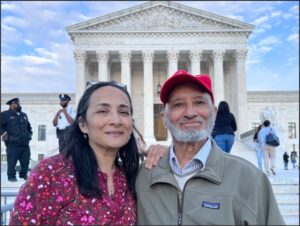 Asra Nomani and her father Zafar

Nearby, my father, Zafar Nomani, 88, was one of those immigrants. He had just looked up at the West Pediment, as it’s called, above the looming columns at the front entrance of the U.S. Supreme Court, where these words were engraved into the marble: “EQUAL JUSTICE UNDER LAW.”

“We are going for equal justice,” said my father, wearing a red Coalition for TJ baseball cap. “That is the purpose of Supreme Court. To listen.”

Arriving in the United States in 1965 as a Ph.D. student at Rutgers University, my father fell in love with the opportunities the U.S. offered us, with hard work as the country’s — and our family’s — ethos. When my mother, older brother and I went to India for a summer visit when I was in elementary school, my father surprised us on our return with a special gift: a complete multi-volume set of Encyclopedia Britannica. It was a family treasure that my family moved with us in our green Rambler as we settled in Morgantown, W.V., in the foothills of the Appalachian mountains.

I grew up in public school, competing seriously with a classmate named Michael Roh for the Scholarship Award, for highest GPA in eighth grade at Suncrest Junior High School. Michael, to his credit, went on to become an award-winning physics teacher at local University High School.

There is a lot said today about the “cultural values” that allow Asian students to do well academically.

When poor Asians in NYC do better at math than high-income Whites (and Blacks and Hispanics), you know this is not because of "Asian privilege;" this is because of cultural values.

Asians are an inconvenient minority to the relentless push to blame minority problems on racism. pic.twitter.com/ADfeuI2D97

One point is made that Asian families have the highest rates of two-parent households, compared to all other racial groups. But it’s more complicated than that. We also have extended family — like the three grandparents standing before the Supreme Court.

In 2002, I had my son as a single mother, my son’s father never taking a role in his life, but it was my parents who stepped in to co-parent my son. My son was able to graduate from TJ in the Class of 2021 because my father moved in with us, walking our dog, Lily, when we couldn’t, making biryani — a dish from India with rice — with chicken and too much on the spices, sending my son to the kitchen for water.

My son’s freshman year, when I took an overnight job to make ends meet, my father would awaken early to make fried eggs for my son and drive him to the school bus stop. He would stand on strip side to cheer my son at fencing tournaments. My son knew stability and support from morning until night, even when I was working.

This is a support we have to give all parents in society, and we cannot punish Asian families as “ravenous,” “resource hoarders,” “white adjacent” and “toxic” — as activists and education officials have done in Fairfax County.

We may sacrifice vacations for sets of Encyclopedia Britannica and after-school tutors but that doesn’t make us illegal as the former Virginia Education Secretary, Atif Qarni, implied when he compared test preparation to illegal performance enhancement drugs.

Fairfax County Public Schools claims it can’t test students quickly enough and  that it would be inconvenient to test them. That’s the school board being lazy once again.

This is what our lawyers say:

“Not only did the panel majority wade into an area of legal uncertainty on the merits, but it disregarded clear precedent that mere expenditures of time, effort, and money, however inconvenient, do not amount to irreparable harm.” (page 2)

Our parents have called testing companies around the country. The results are clear. FCPS could give a nationally-normed test in a few days’ time and get results almost immediately. Its lawyers are making excuses so that they can continue their racist policy, subjecting two years of applicants to unfairly be the target of an illegal process.

“It also gave short shrift to both the public interest in not enforcing unconstitutional policies and the interests of Asian-American students who will be forced to endure another year of harm. … .In these circumstances, the panel majority’s grant of a stay permitting the Board to continue to implement an admissions policy that has been declared unconstitutional was demonstrably wrong.” (page 2)

“Unless the stay is vacated, hundreds of Asian-American applicants to TJ, including children of Coalition members, will be forced to compete for seats at TJ in a system intended to discriminate against them because of their race. … Because admissions decisions are imminent, the Coalition respectfully asks the Chief Justice, in his capacity as Circuit Justice for the Fourth Circuit, to vacate the stay pending appeal and reinstate the district court’s injunction.” (page 2)

It was my honor to stand with another mother and these three grandparents — symbols of the best of what our Asian culture and our world — values. As Dr. Kumari walked away from the U.S. Supreme Court, the festivities continuing, she beamed because it is in America that she has hope and trust that justice will indeed be served for her granddaughter — and all children — with “EQUAL JUSTICE UNDER LAW.”

This column has been republished with permission from Asra Investigates.